Richard Kovelant & Barbara Kovelant have kindly donated these Photographs. They date from 1895.

In this Section we look at the Ferry Crossing from South Benfleet to Canvey Island.

In the Photo we are looking south from Benfleet Downs (now Hadleigh Park) where Hadleigh Ray meets Benfleet Creek. The area on Canvey to the left (the other side of the tidal water) is now occupied by South Benfleet Yacht Club.

A Barge can be seen and on Canvey we can see Waterside Farm, when it was an actual farm! Some of the farm houses stand today and are a recycle centre for the Council. The farm was closed in the 1970’s when the area was redeveloped with new roads (Somnes Ave), a new Roundabout and new route off Canvey Island (Canvey Way also now known as ‘Memorial Way’). 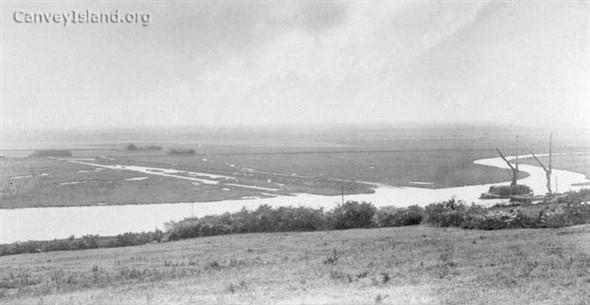 Here (above) we can see the Ferry crossing to Canvey Island, the first bridge being opened on May 21st 1931. The water channel was where the vehicles (wagon, carts etc) used to travel when the tide was out. There is still evidence of this channel today, behind Del Boys Boat Yard.

Here we have the Ferry Man’s cabin. You had to wake him up at night if you needed to cross. Here we see a ferry boat coming with a passenger from Canvey.

In the next Photo the tide is now in and the Ferry Mans cabin seems dangerously close to the water! Some men can be seen sitting, perhaps waiting for the ferry.

Here we are looking east up Benfleet Creek. This is either looking from where the current Canvey bridge crosses, or possibly a little further west near where the St Mary’s Church photos were taken on the sea wall. These areas still have boats today.

Here a horse and cart can be seen, perhaps waiting for the tide to go out or maybe to pick up ferry passengers. In the distance you can see smoke, probably from one of the steam ships travelling along the busy river Thames.

Here’s another view of the Ferry Mans hut when the tide is in. There is also another hut far left. The new bridge goes across here as well as a flood barrier opened in the 1980’s.