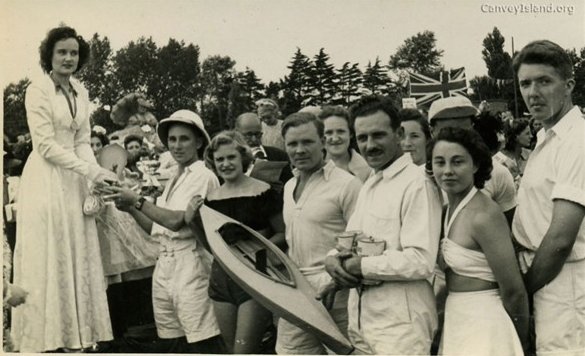 There has been some mention of the Canvey Island Canoe Club recently, while some members enjoyed cruising camping etc there were others who wanted to be competitive and Geoffrey Prout presented a Cup for the fastest time racing around the Island in a normal Prout folding canoe, the starting and finishing point to be from the saltings at the furthest point to the East of the Island.

It was a timed race with official timers and could be held at any time of the individual competitors choice.

The distance around the Island was 14 Miles as near as made no difference, the perceived wisdom was to go anti clockwise so as to obtain the most benefit of the Ebb tide from the river (the idea was to reach high tide at the western end), at this point I must make a confession.

Roland Prout and I had decided to enter together, on the last Spring tide at the end of September, the Equinox bringing the strongest tides, but sometime in August we set off for the Western end of the Island to see if we could poach a couple of Farmer, Fred Leach’s rabbits (meat was still rationed then) I legally owned a .22 rifle, we knew from others that he carefully protected his multitude of rabbits and had a sixth sense where they were concerned and would appear on his bike as if by magic. We did not see any rabbits, so we threw things lying around that would float as targets. After a while I realised that the tide was ebbing but still flowing in the same direction as it had flowed on the flood, thus we conceived a cunning plan! by not letting on about our discovery to others, we decided to use the opposite route, carrying the tide with no slack water and won by over 30 minutes.  Lets be generous to the tide in our success, as in following years everyone took our route.

I think that the last time it was held I was partnering Bert Freeman (a steeple jack) with a time of a few minutes over two hours thinking that we had it in the bag, but then had to stand and watch Francis Prout and Vic Vandersteen, who had started after us, coming down Benfleet creek to finish in under the two hours to win. That was some going, 14 miles at 7 mile per hour in folding canoes was a record which probably still stands, even with help from the tide. That included carrying the canoes around the bridge as we could not go under it. 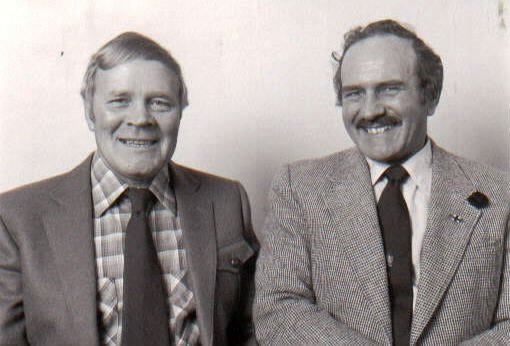 I think that Roland and Francis did it much quicker in a K2 but I don’t know in what time. At around this time either Roland or Francis came up with the audacious idea that they together with Vic Vandersteen and myself should enter the National one mile Championships in a K4 (4 man canoe).

I say audacious because we were proposing to take on the “posh clubs” The Royal Canoe Club, The Richmond Canoe Club who owned and raced them, in a canoe which I don’t think that Vic and I had had ever seen, which we would have to borrow from Richmond canoe club as they were the only ones to own any. To add to that, we had no way that we could train together as a team, but only in pairs, Vic and I used a canvas cruising one. Roland and Francis had a K2. The whole plan came apart, when my Father refused me the time off, it was probably a bank holiday. By good fortune some of the Lady Members who were also customers remonstrated with him and I presume that the thought of losing business changed his mind and he said that provided I spent the evening preparing enough Bacon and ham etc to see them through the next day I could go.

I then had to enter us for the race, at which point there was another problem; they wanted us to race our heat on the Friday evening, which I said was out of the question as two of us would be working until 10-11 0/c that night. They finally gave in and also said we could borrow a canoe for about an hour to train/ practice as a team, Roland in front then Francis, Vic next then myself to not only do my bit but steer as well, this in a canoe about 36 ft long and 19inches inches wide, with a turning circle bigger than a Super tanker and rudder about the size of a playing card, which was hairy on a Saturday, with people wandering aimlessly in their boats while we were travelling with a full head of steam in a race.

Anyway, we won both the heat and the final. There was a Canoe club “Doo” that night probably at Admiral Jellicoe, when we arrived they had managed the usual greeting banners.

The biggest pleasure for me; was when Dr Stephens stopped outside our shop to buy a paper from Tremains next door, then came in to show my Father the small head line. “Two boatbuilders a fishmonger and a grocer thrash the cream of British canoeing” all he said was something like ‘Oh that’s good’.

Mind you, he used to play for the Island football club and I had never enjoyed running up and down a soggy field in boots thick with mud and dubbin, with a ball equally soaked with water and mud, which I am sure was full of sand, and a lace sticking out like a knuckle duster which one was expected to head. 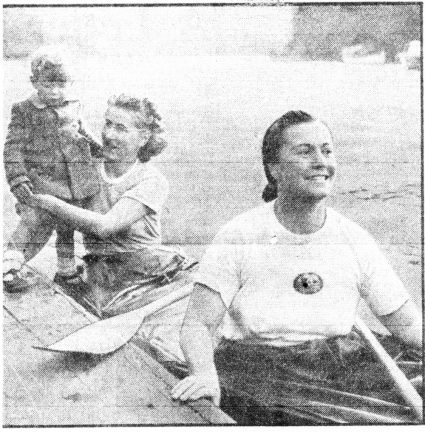 Canoe Race Winners. Mrs Chambers being greeted by her 2 year old son at Richmond, after she and Mrs Leach had won the 21 miles ‘London River Race’ from Greenwich to Richmond in the Ladies’ Folding Doubles event.

Around this time my late wife Olive (Lesadd) was asked by Pat Leach from one of the other clubs to join her in a new Race from Greenwich to Richmond 24miles, I felt that it was too long for Ladies, but Olive being Olive decided to have a go. I followed in my car stopping at the various bridges, as they reached the 1st, the Tower Bridge, it opened which they thought was very kind, until a ship hooted for them to get out of the way, as it passed them, someone called down, ‘we have sunk the others’. This was the other ladies in the race. There were various classes. The ladies started first on the supposition that they would be passed by the various men’s classes, but they arrived first in 2 hours 45 minutes. As the other various classes were arriving, one of the committee came out and whispered to me “they are trying to keep it quiet but Olive and Pat have put up a faster time than the Marine commando’s”. The difference was that they were paddlin., As far as Olive was concerned they were racing and racing to win, I felt sorry for Pat with Olive behind cracking a whip.

Francis and Roland were virtually unbeatable in the K2 class nationally in that era, I can’t remember how many they won but represented the country in the Helsinki Olympic games reaching the final.

There have been accounts about the barge and how the canoe club bought it for a club house, so I will skip that part. But when it arrived and it was moored, holes were made in the end compartments thinking that that would keep it in position.  Shortly after we received it we had started making a proper entrance, then there was a strong gale with a high tide. Almost immediately I received a letter from the sea wall commission telling me as secretary, “That the barge was resting on the foot of the sea wall and could damage the wall, therefore we were to move it instantly if not quicker”. 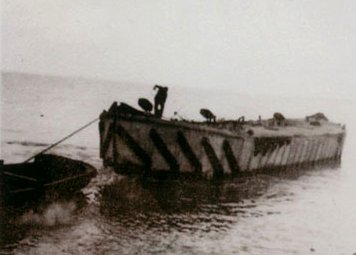 As there was no likelihood of a suitable tide until the spring equinox, that was how things stood. We had not allowed for January 1st 1953, I went to bed early with flue like symptoms. My wife slept with the children, I woke up wondering if I should get up and be sick or lay there and be miserable, then realised that there was a strange sound, so I looked out of the window and the bungalow in Rainbow road appeared to be travelling at about 6 knots my first thought was that the bloody barge had broken the sea wall. I rushed into wake up my wife who told me to go back to bed and that I was delirious.

I then pointed to the old fashioned wood and zinc meat safe on a table from outside back door, floating past. Having got them onto the garage roof, we spent a large part of the night with ducks and geese from the nearby smallholding swimming around us quacking etc probably expecting us to throw crusts,.

While trying to work out not only how to somehow reach safety when it was light, but also how the Canoe club members were going spend the rest of our lives, if not longer, paying for damages. I’m sure that we had not insured it. I found a small pig dead in our bedroom. I know he wasn’t there when I went to bed, I’m sure I would have noticed.

One thing it did do for us, it moved the Barge away from the wall and turned it around at which point we lost interest in it. A little later Vic had taken over again as Secretary and managed to con some gullible person into buying it, I can’t remember for how much, but he probably sold him Tower bridge while he was at it. 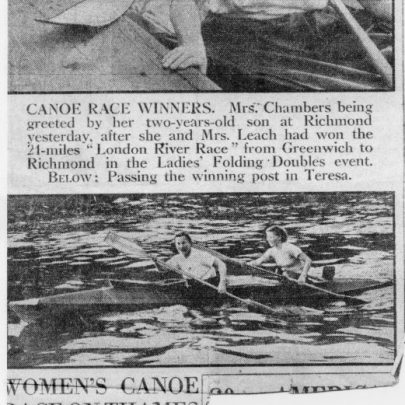