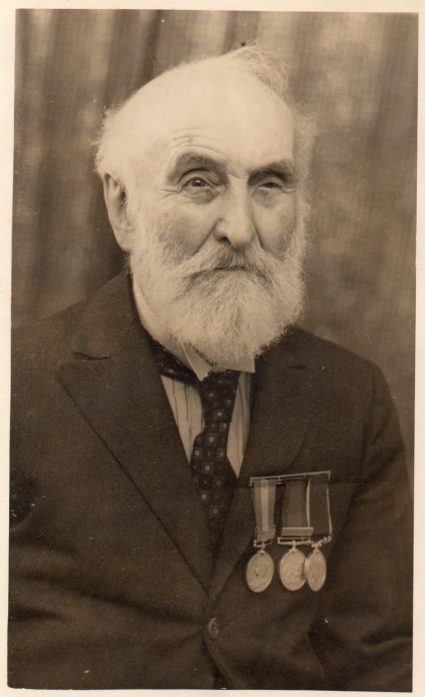 I recently published a newspaper cutting from the Essex Newsman 1939 about ‘Oldest Resident Passes’. This was Ocean James Smith whose picture has been kindly sent to me by his great grandson.

Ocean James Smith was born in 1846 in Sheep, Kent. His father was a sailor on the ship ‘Ocean’ which gave him his name. He married Fanny Hyde in Surrey in 1883, the couple lived in Camberwell where Ocean was first the Sexton, then the Verger at St Marks Church. The couple had three children Frances, Ocean and Ellen, his son Ocean emigrated to Canada.

According to the newspaper cutting of his death he had a long and honoured Army record. Ocean and Fanny retired to Canvey in c1915 where Ocean took up the post of pro-warden and sidesman at St Annes Church. Fanny died in 1919 and is buried in St Katherines Churchyard.

The couple lived at ‘Brooklyn’. Hanut Road, Leigh Beck, Ocean moved sometime after 1929 to ‘Happy Days’, Leigh Road, Maisonwyck Estate where he died in 1939 aged 93. He too is buried in St Katherines Churchyard. Fanny’s grave is behind the church and it is highly likely Ocean lies there too.