written Fred B McCave, published in 1974 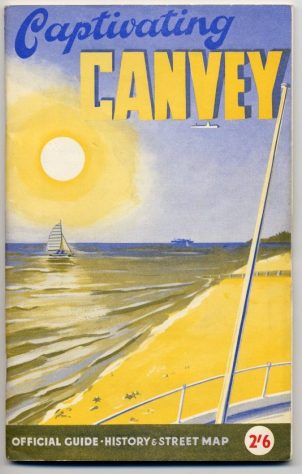 One of the Captivating Canvey Official Guides

Frederick Bertrum McCave was born in 1923 the son of Bertrum Augustus McCave and Helvetia Veron BREWSTER who married in 1922. Bertrum Mccave was the Author of ‘The official Guide to Canvey Island: An isle of delight in the mouth of the silvery Thames’ published by the Canvey Island Chamber of Commerce in 1933. I understand it was his mother Helvetia who was the driving force behind the many publications after her husband’s death in 1937.

Fred continued the work his parents started and became the publisher of ‘Canvey News’, ‘Canvey Chronicle’ and ‘The Bulletin’ as well as ‘Captivating Canvey’. He also published two books about Canvey in 1987 ‘Canvey Island in old postcards’ and in 1985 ‘A History of Canvey Island’. The local historian continued until his death in 1987. 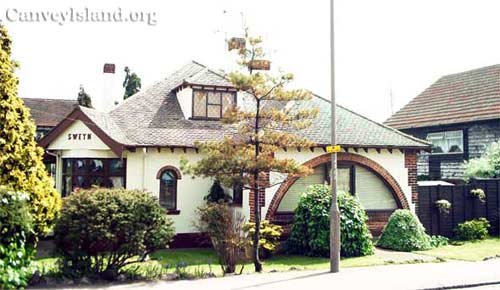 Canvey presents a fascinating subject for study in many ways, and not least among them is the historical one.  Early maps of the Island show it as divided up into several islands.  Ptolemy wrote of it as Cnossos, but the earliest known record in this country is in the records of the High Court, when the transfer of land took place at “Caneye” in 1254.  There is another mention in 1259, when it was written “Kaneveye”.

Pieces of Romany pottery found on the Island offer proof that Canvey was occupied by the Romans, but when the Legions withdrew it was neglected until the ninth century, when Danish and Norwegian pirates carried out raids.  One authority states that at the time of the Norman Conquest Canvey was actually occupied by the Danes. 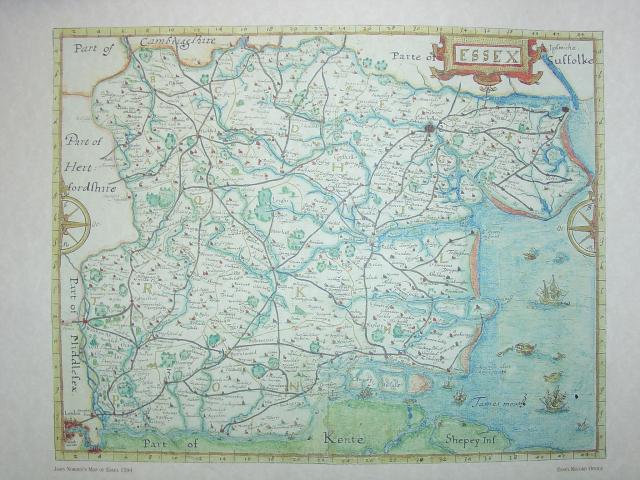 One of Norden’s maps of 1594 of “Canuey Islandes” gives Canvey in three parts.  It shows a deep creek from Thorney Bay towards Oyster Fleet (when perhaps beds of shellfish were laid, as the old English meaning of the word “fleet” is a tidal creek in a marsh).  That would have been an ideal spot for oysters.  Oysters found off Canvey could be offsprings of the ancient beds.

Some of the early Canvey landowners, like Edward Baker (who owned Knight and Southwick) and James Baker (who held 500 acres in 1569 with Sir Roger Appleton), held the land on Canvey bordering the creek which runs up from the Thames on the west side of the Island.

On a deed dated April 9, 1622, he made an agreement with others by which one-third of the Island was given “in fee simple” to the Dutch who reclaimed Canvey.  Joas Croppenburgh, was the agent and the engineers were Cornelius Vermuyden (who carried out other reclamation work on the Thames and was knighted by King Charles I in 1628), and Cornelius Vandervanker.

Canvey’s former Parish Church is linked with these pioneers.  In 1628 two hundred Dutch workers petitioned the King to allow them worship in their own language.  Their request was granted, the service and minister to conform to the Dutch Church in London, and a timber chapel was built.  When it became unfit for use another was built in 1712 by Mr Edgar, an officer in the Government Victualling Department, and it was consecrated on June 11 on that year.  About 1745 it was pulled down and another built for service, largely at the expense of Mr D Scratton. 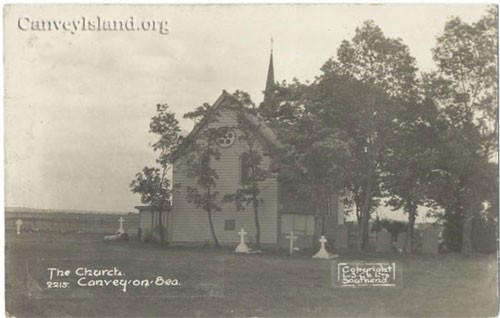 It was consecrated for use according to the rites of the Church of England and dedicated St. Katherine’s.  The Dutch Chapel was specially mentioned in an Act of Parliament.  In obtaining civil and ecclesiastical rights in 1881, the bell was cast in 1875 and the register dates from 1819.

During the second war with the Dutch the Dutch fleet, under the command of the famous admiral de Ruyter, after raiding the Medway and burning British man-o’-war in June, 1667, detached a squadron of the fleet under Vice-Admiral D. Van Gent, to blockade the Thames near Canvey against de Ruyter’s orders and caused serious damage.

Later, when the fleet was moored for three days at the Nore, an inquiry was held and the raiders punished.

During this time horsemen riding poste-haste to Chelmsford reached Sir John Bramston, who wrote to London (where the sound of the Dutch cannon had caused panic): “The enemie hath burnt barns and a house at Canvie”.

For over six hundred years cheese was made from sheep’s milk and was a great industry on Canvey.  Originally there were eight “wicks”* (or dairies) where cheese was made and the names of five have survived until recent times.

Before the days of cold storage an annual fair was held on the Island for the sale of sheep for the London market.  This was held for twenty-five days in June and George Walpole, in a book of travels written in 1784, tells how he enjoyed all the fun of the fair.

Being on the coast, Canvey has naturally a history of smuggling, barefist fights and even highwaymen and footpads.  At one time the Parish Church was considered a safe reservoir for contraband.

A remote spot, the Island was considered suitable for prizefighting.  In 1857 Tom Sayers fought Aaron Jones for £200.  It got dark at the end of the sixty-fifth round and the referee declared the fight drawn.  Tom Sayers fought and beat Tom Paddock on the Island in a championship fight for a purse and sidestake of three hundred sovereigns. 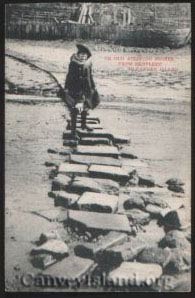 Outside the Council Offices the old stepping stones from the creek are preserved.  They were in use before the bridge was built, and the creek was forded at low tide.

In January, 1881, the sea wall broke and land was lost through inundation.  Remains of the original sea wall can still be seen.  This was not the first disaster as during 1755-6 cattle were drowned.  On the night of January 31-February 1, 1953, Canvey was badly flooded and lives were lost.  Thanks, however, to the courage of its residents and the help that poured in, the Island was soon back on its feet and once again has developed rapidly.

Like many other places, Canvey had its own “haunted house”.  Situated near Denham Road, the legend runs that at one time it was inhabited by two old gentlemen, one a “true believer in the Christian faith” and the other an “unbeliever”.  The Christian said if he died first he would come back and convince his old friend of the hereafter.

He did die first and one wild night, when the wind was roaring round the chimney, a peculiar noise aroused the single inhabitant, who went to the door and opened it.  A gust of wind came into the room, but he could see nothing.  The wind died away and even the elements seemed to be holding their breath in anticipation.  The cat, which had followed him to the door, gave a sign of recognition and started purring and rubbing itself against something it could obviously feel and see in the pitch blackness, but our friend saw nothing.

When the building was pulled down a secret chamber was found containing the rusted remains of horse pistols and a few buttons.

At one time a popular supposition was that a tunnel connected the house with Hadleigh Castle, and was used by smugglers to evade Excise officials.  Many people have said the sea could be heard very loudly in the building.  Should such a tunnel exist it would indeed be a marvellous engineering feat as the creek itself would have to be crossed. 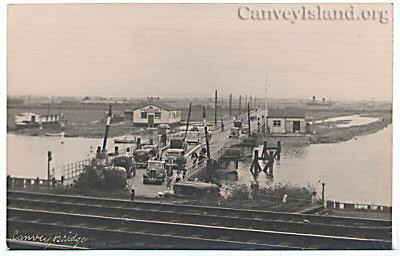 On April 1, 1926, Canvey Island became an urban district and in 1931 a bridge joining Canvey to the mainland was opened.  Further improvements in the shape of the building of a motor road across the Island, sewerage and modern amenities followed wake, and at the outbreak of the Second World War, Canvey was established as a happy seaside resort but with winter comforts to tempt a good many workers from London suburbs to live here.

Canvey took its place in the front line during the Second World War.  Before London was attacked, Hole Haven was bombed in May, 1940.  An anti-submarine boom was laid off the Island; the old sea wall was defended with barbed wire and forts maintained a vigilant watch on the river.

A Memorial Hall has been built in memory of Canvey’s hallowed war dead, her soldiers having served in every part of the world.

Since the war the Island has gone ahead in leaps and bounds.  A housing estate in Long Road, industrial sites, beach amenities, more roads, recreation ground, community centre and day centre for the old age pensioners are just some of them.  New sea walls and a second bridge have further helped Canvey’s progress.

On April 1, 1974, Canvey became part of the Castle Point district. 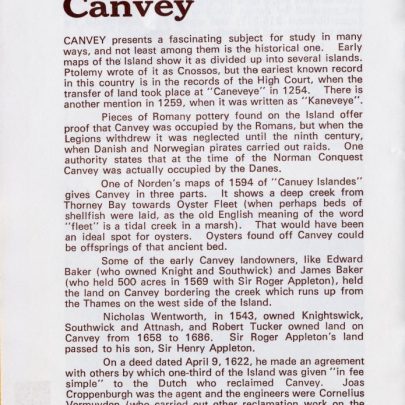 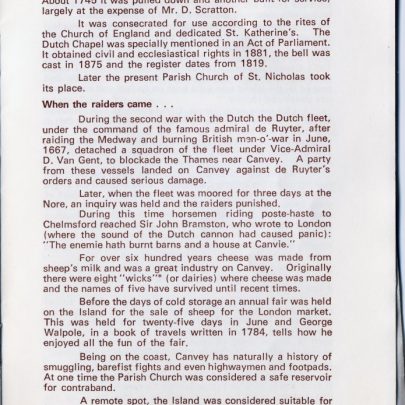 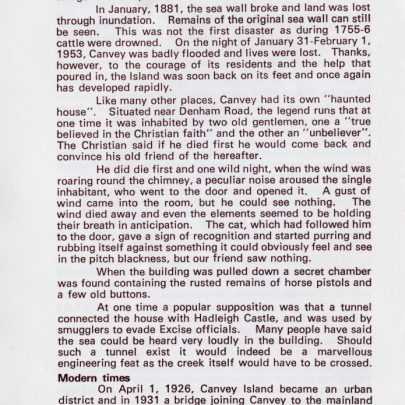 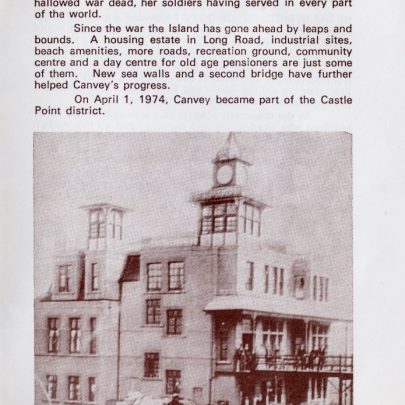