Background to a Tragedy 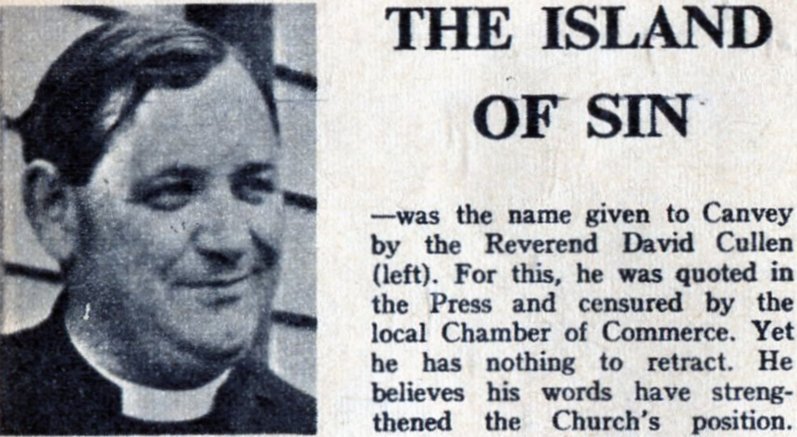 A burning houseboat, a murder charge-and the world is suddenly aware of a small island in the mudflats of the Thames. Arden Winch paints the background to the ‘Tragedy of the Twins’.

Canvey Island, to those who know about it only from what they have read, is a pretty lurid place. The Island of Sin, it has been called. Marriage partnerships have a turn­over like the fruit machines in the cafes. Mad bohemianism runs amok, normal speech is full of words the Press cannot print, Buenos Aires comes a poor second.

That, at any rate, is the impression Britain has been given, since The Canvey Island House­boat Mystery became front-page news.

The first thing you ought to know about The Canvey Island Houseboat Mystery is that it doesn’t have much to do with Canvey Island.

Mrs. Wright, alias Mrs. Clark, the mother of the twins, was a Canvey woman; but she lived in a houseboat anchored in a creek which is part of Benfleet.

The strangely moving burnt-out hulk of the Windmill has been towed from its moorings, and now lies on the mud a few hundred feet away; the charred mattresses, the tattered bits of curtain, still exposed to the gaze of the trippers who stop to look at it on their way to the amusement arcades on the other side of the island. Spivs in Southend are reported to be selling bits of the burnt wood, which is all that remains of the prison in which two children died. Gradually the curiosity will fade. Already most of the reporters have left, in search of another scandal in a different community.

What is Canvey Island—this wild, debauched, sin-infested Port Said of the Thames Estuary— really like? 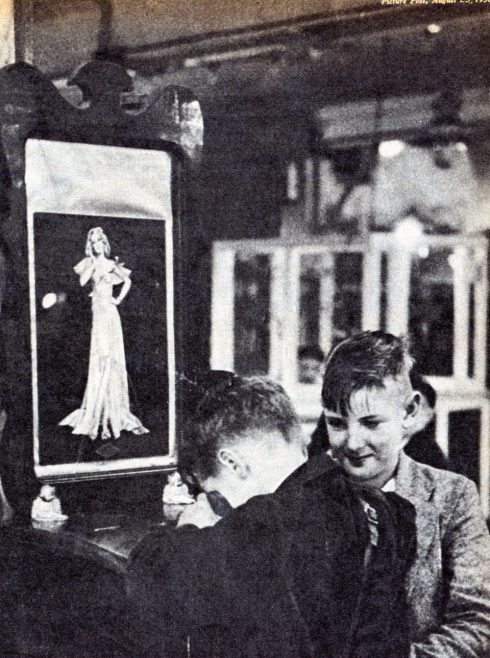 WHAT THE SCHOOLBOY SAW in Canvey’s big amusement arcade. In its efforts to rival Southend, many of the island’s cafes possess ‘fruit machines’ and other pastimes. Once a home for the retired, Canvey now boasts a large working population commuting daily to London.

I had never seen Canvey before. I was terribly disappointed. The first impression was of a rather impermanent-looking bridge crossing a tin-can infested mud creek, and opening on to a road across drab marshland. At half-hearted intervals wooden bungalows squat unenthusiastically in knee-deep grass. A semi-inhabited ghost town. A sort of clap-board jungle.

We called upon the much-quoted, much-misquoted vicar of the island, the Reverend David Cullen. The first time we saw him he was painting his house, wearing grey flannel trousers with large rents in both knees, and a collarless shirt.

For his outspoken comments on his flock he had been censured by the local Chamber of Trade, who subsequently withdrew their protests. I taxed him with my own impression at that time, that Canvey was so dull that people prob­ably committed adultery because there was noth­ing else to do in the evenings. He assured us that this was far from the truth, that there were old age pensioners’ clubs, dances, darts clubs, table tennis clubs, all sorts of things.

Canvey, he explained, was growing. It had ten times the population it had 25 years ago. The Reverend Cullen is the kind of modern clergy­man who is a genuine leader of parish opinion. He did not regret what he had said. He believed his action had probably strengthened the Church in the area. He only regretted that he had been so often misquoted; and he has indeed received two letters of apology from national newspapers, which is no mean achievement. 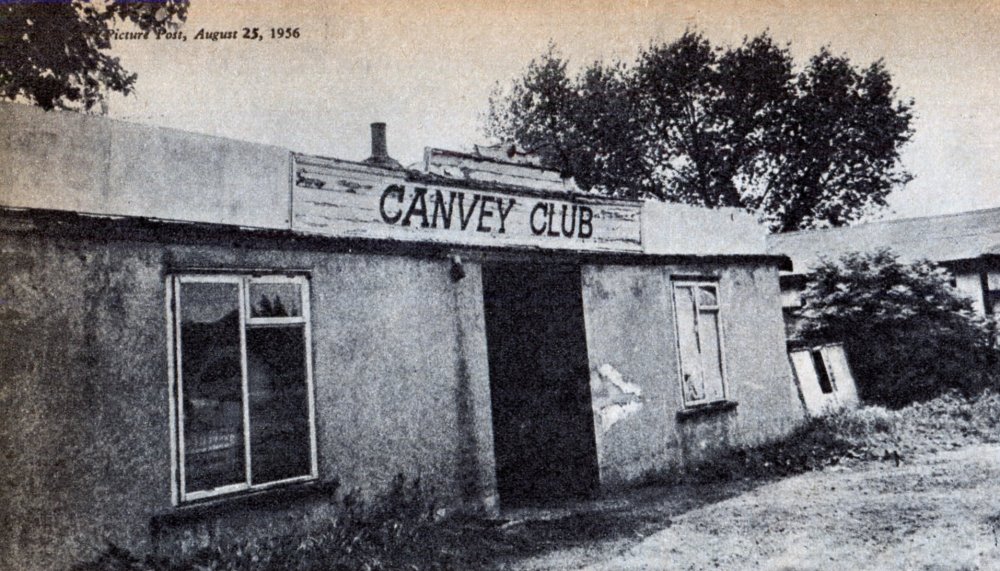 Social Centre, The Canvey Club is open in the evenings

We continued our tour of the island. On the beach parents sat in Council deck chairs, watched their children bathe, ate candy floss, and tried the different programmes on their portable radios. They were obviously enjoying themselves, and the boat on the mud seemed to be far from their minds. Behind them the juke boxes played away in the cafes, visitors selected their choices from the revolving displays of smutty postcards and coronation pictures of the Queen, the Bingo stalls still had two last places to fill before they could start the game, and there was a steady demand for ice-cream. It was all very friendly, and very pleasant.

We went to Thorney Beach Holiday Camp and met its owner, Colonel Fielder, J.P., Chair­man of the Council, large local landowner, and generally recognised as Canvey’s uncrowned king. Colonel Fielder is a man who thinks and acts big. He is shortly going over to New York. ‘”Coney Island, Jones Beach, look, here are some photos. We can do that here. We’ve got every­thing. Thirty miles from London, ruddy wonder­ful beaches. In five years it’ll be marvellous here.” He took us round his camp, pointed out the shops, the communal kitchens, the free cinema. He takes a movie film of all the children arriving, shows it to them a few days later. The camp is spotlessly clean, gay with flowers (“won­derful flowers, roses. Look pretty, and covered with spikes”), and indeed his tour of the camp was something of a triumphal parade. Everyone waved to him, and he waved back. Colonel Fielder’s campers come again year after year. He has no fears for the future. There are precious few places in England where a family of four can get a chalet for a week for five pounds. Colonel Fielder himself owns six cars, and spends the winter at his own house on the French Riviera. Everyone is satisfied. 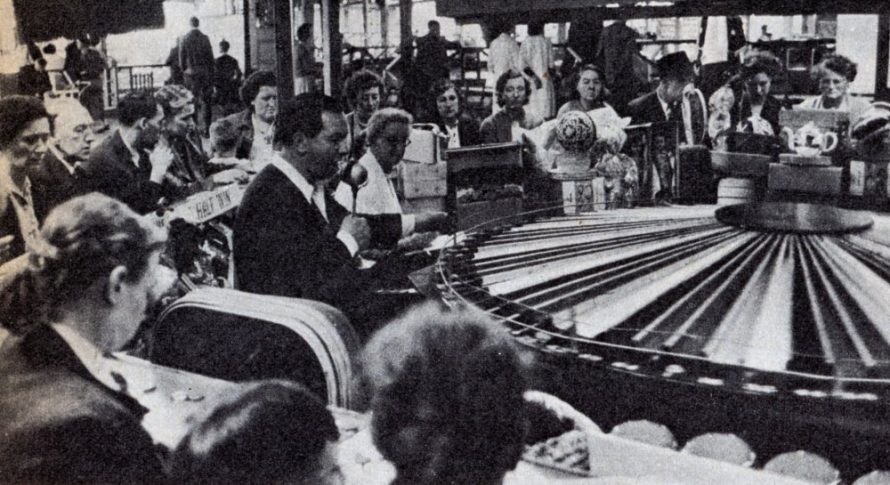 Bored faces at the bingo table, the proprietors never loses.

We also met Mr. McCave, editor of Canvey News, and author of the standard guide, Captivating Canvey. Like Colonel Fielder, he believes that in five or ten years Canvey will rival Southend. He talked of the proposal whereby various metropolitan boroughs will house their overflow in Canvey, a plan that will mean four hundred more houses in the island.

He explained how the population was not only growing, but changing. No longer is Canvey an island where people retire on inadequate pen­sions (although 2,000 of its 14,000 population are old age pensioners). Apart from the workers who live on Canvey, but are employed by firms like Ford at Dagenham, and Ekco Radio at South­end, there is a growing number of commuters to London.

But at the back of my mind there was all the time that burnt-out boat, rotting away on the mud. Some people in Canvey had said that they believed the tragedy would bring more tourists to the island. After all, ever since the British Press erupted in alarm at Swedish morals, it has been very difficult to get a berth on a ship going there. But there is a difference between flaxen-haired amorality and that lonely horror that still smells of fire.

The beaches are crowded – mostly with Eastenders.

The Benfleet Council are behaving with com­mendable gentleness to the people on the boats, whose only crime, for the most part, is a desire to live a life of privacy. They paint their boats, they grow marigolds amongst the weeds on the bank. The Council, although it has the power, will not move them if they are good tenants, and never unless they can provide alternative accommodation. There are now about 35 boats occupied all the time, and slightly fewer used only during the weekends. The Chairman, Councillor Hart, explained. “There are some bad eggs amongst them, but by and large the bad eggs and the bad tenants go together. We will gradually remove the bad tenants.”

Until then, amongst the other derelict craft that turn the creek into a slum, that burnt hulk lies still, with the remains of the perambulator in the mud beside it” a source of wonder for the gaping tourists, and a reminder of social work still to be done.