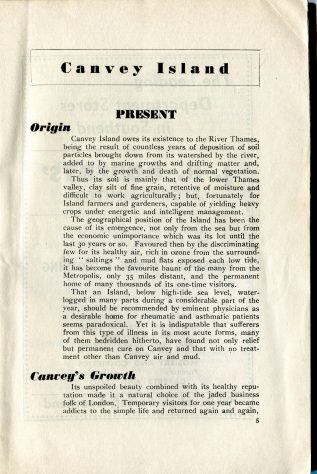 Canvey Island owes its existence to the River Thames, being the result of countless years of deposition of soil particles brought down from its watershed by the river, added to by marine growths and drifting matter and, later, by the growth and death of normal vegetation.

Thus its soil is mainly that of the lower Thames valley, clay silt of fine grain, retentive of moisture and difficult to work agriculturally; but, fortunately for Island farmers and gardeners, capable of yielding heavy crops under energetic and intelligent management.

The geographical position of the Island has been the cause of its emergence, not only from the sea but from the economic unimportance which was its lot until the last 30 years or so. Favoured then by the discriminating few for its healthy air, rich in ozone from the surround­ing “saltings” and mud flats exposed each low tide, it has become the favourite haunt of the many from the Metropolis, only 35 miles distant, and the permanent home of many thousands of its one-time visitors.

That an Island, below high-tide sea level, water­logged in many parts during a considerable part of the year, should be recommended by eminent physicians as a desirable home for rheumatic and asthmatic patients seems paradoxical. Yet it is indisputable that sufferers from this type of illness in its most acute forms, many of them bedridden hitherto, have found not only relief but permanent cure on Canvey and that with no treat­ment other than Canvey air and mud.

Its unspoiled beauty combined with its healthy repu­tation made it a natural choice of the jaded business folk of London. Temporary visitors for one year became addicts to the simple life and returned again and again, finally settling down in their hundreds in the place they had come to regard as their logical Utopia.

Thus, from the few farms and scattered houses of 30 years ago has grown the community of to-day, an urban district of some 14,000 souls, catered for in large part in the modern manner. Essential services, water, gas and electricity are extending their tentacles as fast as the economic position allows, and the few somewhat ramshackle traps and broughams have been replaced by a fleet of modern omnibuses. Cinderella has begun to take her rightful place in society.

Returning to the geographical aspect, for all practi­cal purposes, Canvey is an island no longer, for in 1931 a bridge was opened, spanning the Hadleigh Ray (Benfleet Creek), and linking Canvey with the mainland. Prior to this, passage on foot could be made by stepping-stone at low tide only, whilst ferry­men in rowing boats plied their trade at high water.

To-day, traffic makes its way unimpeded across the 300 ft. span bridge, a carriageway 20 ft. wide and a footpath of 5 ft. The bridge is built on piles and carries the roadway well above normal high water. Water-borne traffic is allowed passage by the retraction to either side of the twin 30 ft. centre sections of the bridge. The lower supporting cradles move back on rollers over a runway on the creek bed, while the carriage-ways slide back with them over the fixed por­tions of the bridge, leaving a clear waterway 60ft. in width. The whole operation occupies barely a minute, being powered by electricity and controlled by one man.

It is over this bridge the traveller must pass on his way from Benfleet Station across the Island, a journey scheduled to occupy 18 minutes by bus.

Instantly apparent is the tang of the Canvey air. It is the writer’s experience, voiced by many others, that returning to the Island from a journey of perhaps only a few miles, the characteristic strength and salty flavour of Canvey’s air is invariably obvious on leaving the mainland and coming’ within the “sphere of influence” of the Island atmosphere.

As our bus reaches the new Dutch Village on the left we have on our other hand one of the two remaining original Dutch “round” cottages, a legacy of the Dutch “occupation.” This, dated 1618, is three years older than its counterpart some 4oo yards distant at Canvey Village. Octagonal in shape these cottages, although small, are of rather massive construction, probably owing their survival to this fact.

Forty yards before the junction of the Holehaven Road, which branches off to the right past the site of the Old Village Pump (removed during road improve­ments), stands the Parish Church of St. Katherine’s on our left, while opposite is the old Village School, now used as a Village Hall for social activities.

Leaving the bus route to follow Haven Road we pass the second Dutch Cottage on the right, past the Vicar­age on the left and continue on up to the sea-wall where the old Lobster Smack Inn—the oldest inn on the Island and one-time haunt of smugglers—nestles snugly under its shelter.

Cheek-by-jowl with the picturesque old “Smack” are the stark, symmetrical symbols of modern industry, the storage tanks and machinery of the oil works.

Re-tracing our steps and picking up the bus route at Canvey Village we enter the more modern part of the Island as Long Road proceeds past the Catholic Church, Primary and Secondary Schools, and the rapidly expanding council housing estate to Furtherwick Road and the main shopping centre of Canvey.

Here Furtherwick Road crosses the eastern end of Long Road, running almost due south to the Shell Beach and the modern buildings of the Casino, Can­vey’s Kursaal. The northern end traverses a parade of modern shops to Lakeside, probably Canvey’s most famous beauty spot, there turning east past Small Gains with its old elms and barns and on to Leigh Beck, the bus terminus.

A short walk past the saw-mills brings us to the Point, the most easterly reach of the Island and prob­ably, to the nature lover, the most interesting part of

Canvey. The Saltings teem with wild life, seals and dolphins are not infrequently seen, and the plant life is extremely varied. To crown all, the view is extra­ordinarily fine, the coast from Leigh to Southend seems but a stone’s throw and the Kent coastline to the south stretches to the eye’s limit.

From Benfleet to the Point the route is full of inter­est; for much of the journey the scenery is still essen­tially rustic, and in the more urban parts the houses show the individual tastes of their owners. Farther afield, Northwick, Winter Gardens, Newlands, Sunken Marshes, etc., offer a score of interesting rambles unlike anything to be found in the stereotyped attractions of the average sea-side resort.

Canvey Island is essentially “different,” it conforms to no known, man-devised pattern, in no other place does one find the combination of factors, which is Canvey ; in short—Canvey is unique!