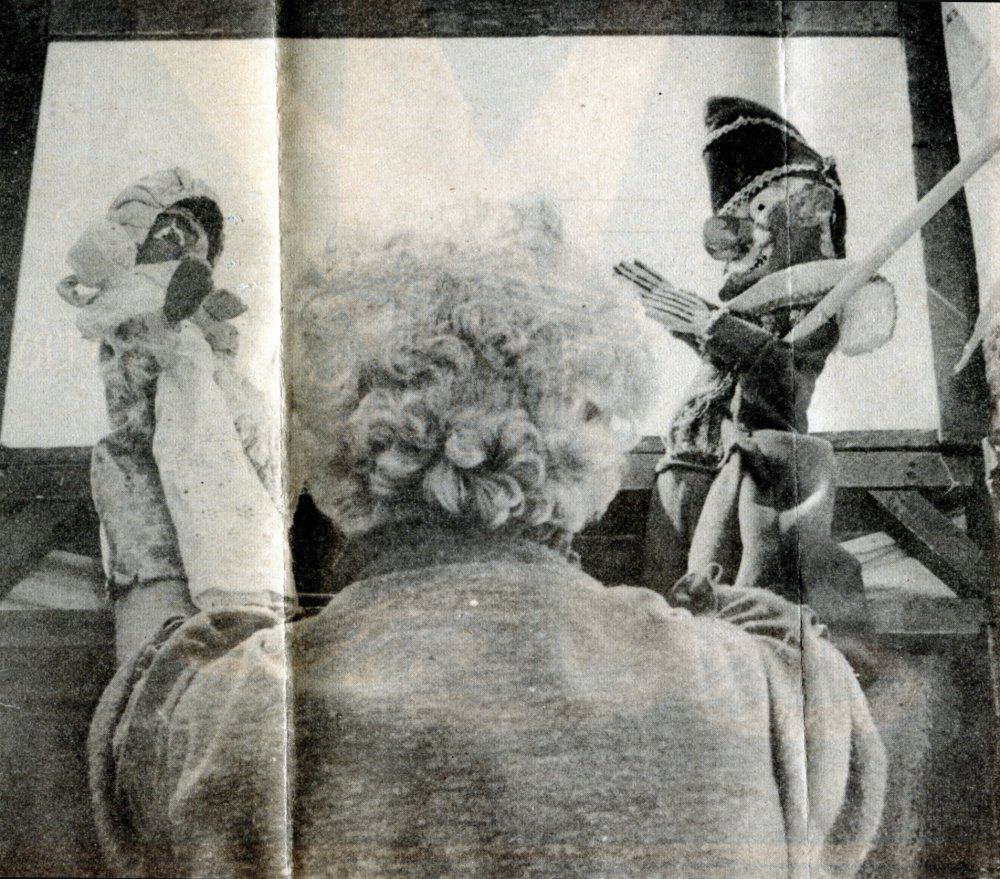 With all the Punchinello-mania going on in London, let us not forget the likes of Auntie Winnie of Canvey and her rude and ruddy-cheeked puppets which have charmed children in South East Essex for the past 40 years.

Last Saturday, as 50 Punch and Judies squawked, cursed and beat the hell out of each other in Covent Garden, celebrating some seemingly significant anniversary of their own, Auntie Winnie was setting up her booth in a Southend living room for yet another children’s party.

Winifred Capser, who had hauled the heavy folding boards from her Cortina estate, with all the sprightliness that belies her silver-haired years, has the acquired wisdom not just of her puppeteer father, but a tradition rooted in Roman days.

So let all those trendies get on with it — with their clever sets and clever names for cleverly-carved puppets which sing Madonna numbers to they’re in fashion.

And who cares about the visiting black doll performers of South Africa or dazzling garbed Czechoslovakian and Neapolitan peasan­try puppets?

Auntie Winnie can generate more children’s giggles with her hard-headed battlers framed in tired Christmas tinsel and balding red velvet cur­tains than any of those preeners.

Besides, what was it all about anyway? Organisers from the British Puppet Model Theatre Guild breathlessly tell you that it was the 325th anniver­sary of the first mention of a Punch and Judy show in England in the diaries of Samuel Pepys.

In truth, it wasn’t much of a mention.

Pepys, in his entry for May 9, 1667, describes how that day he toured London, paying his bills, then looked at some art and sculpture copied from Raphael and Michelangelo.

He later went to Covent Garden to visit an ale house with a friend to see another painting on sale there.

Almost as an af­terthought, Pepys writes: “Thence to see an Italian puppet play that is within the rayles there, which is very pretty, the best that I ever saw, and great resort of gallants.” 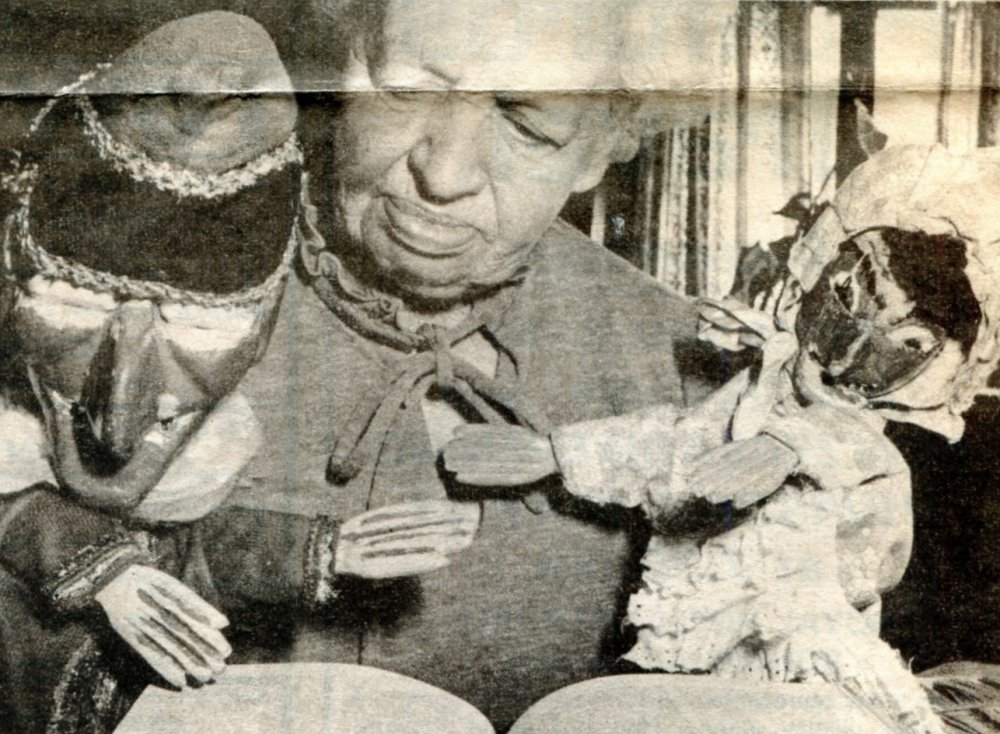 Back of the booth, a sight children rarely see. Aunti Winnie, and pals peep into Pepys diaries

But it was enough to trigger a screech of those raucous Punch mouthpieces called swazzles and a battery of bludgeoning.

Then there were the solemn rededications of plaques at St Paul’s Church, the actor’s chapel in Covent Garden. And the bringing on of a moun­tainous cake illuminated by 325 candles. . . .

Meanwhile, Auntie Win­nie’s great living room drama was unfolding with a vigour that few of them could have matched.

Her rude, hook-nosed rascal, who stick-bludgeons his unfortunate wife, the doctor and the policeman and who constantly threatens to harm poor little baby, gets his crocodilian come-uppance in truly traditional style.

And as Charlie Clown celebrates the villain’s demise you get the feeling that these performances were honed over genera­tions by the fresh breezes of Canvey’s beaches.

Winnie, like her father before her, owns the coun­cil licence to give Punch and Judy shows at the island’s Shell Beach and Thorney Bay every sum­mer.

Ever since she was 18 she has tooted the swazzle helping her Dad, Paul Capser, to put the punch into Judy, and assisting in the magic act she was also to perfect.

And ever since she could remember, even in the days they lived in Camden Town, then Highgate, he was a Punch and Judy man to his wooden-head-clad fingertips, even spurning her string-tangled attempts to master string puppetry.

“If you’ve got a Punch and Judy and a booth, you’ll always eat,” he told his beloved Winnie.

She was an only child — and there’s a sad thing, because Auntie Winnie was never an auntie, and because she never married, was never a mother, yet she became auntie to thou­sands and left her maternal mark indelibly on their memories.

They are the ones who kept Winnie and her pup­pets going all these years and that beak-beezered brute is still very much alive and well and living in a 1937 mock Tudor house on Canvey.

Living with him, apart from his unfortunate family and victims, are Winnie, two cats, two cocker spaniels, a goat called Trip-Trap, chickens and rabbits which occasionally appear in Winnie’s magic show.

Winnie settles him in his box where he lies all wide-eyed and wicked and recalls: “My dad died in 1965 and taught me all I know about the craft.

“When we toured the parks and public places of places like Nottingham and Leicester, he taught me never to alter the basic framework of the traditional story, but to sense and react to the responses of the children and every audience is dif­ferent.”

When you watch their lit­tle faces light up with mirth and a mixture of fright and delight at the presence of that shiny-faced croc, you have to sneer and giggle at the trendies who accuse her of encouraging violence

“How much more violent are some of the video films children see nowadays?” asks Winnie, who then proudly relates how she was once invited to set up her booth inside St Nicholas Church, Canvey, by the vicar who regarded the violent squabbles as the means to the tale’s moral end.