Report of the Chief Fire Officer 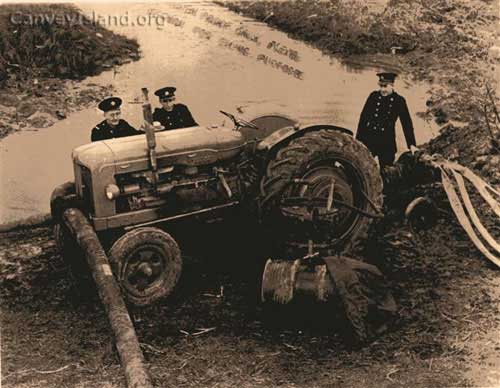 Report of the Chief Fire Officer on the operations of the County Fire Brigade during and following the extensive flooding on the East Coast and in the Thames Estuary on the night of 31st January/lst February, 1953

An endeavour is made in this report to describe the events of the night of 31st January / 1st February, insofar as they affected the County Fire Brigade, and the activities of the Brigade in consequence of the widespread flooding which occurred.

For the sake of clarity the report is divided into three main sections dealing respectively with rescue operations, pumping operations and general matters connected with or arising from the incidents.

Although it later transpired that an unusually high tide was expected, no general warning was issued, hence no special plans could be made to meet the emergency, nor was there any prior indication of the extent of the disaster or of the task of dealing with it.

The first consideration was to assist in rescuing people from their flooded homes. During the early hours of Sunday 1st February, magnificent work was done, particularly at Canvey Island, Wakering and Jaywick, by the three emergency services, Police, Ambulance and Fire Brigade. As will be seen from the following paragraphs, the rescue parties worked in a biting wind, often waist deep in cold water and were handicapped by the lack of boats. The resourcefulness, initiative and endurance displayed during the initial stages and, indeed, throughout the operation, were of the highest standard.

At 1.30 a.m. on Sunday, 1st February, the Brigade was called by the Engineer and Surveyor to the Canvey U.D.C. who stated that owing to an exceptionally high tide there was danger to homes in Rainbow Road, Heidelberg Road, and towards the sea wall. A pump and a land rover from Station 25, Canvey, turned out immediately with Sub Officer Griffiths in charge and made their way to the affected area. Upon arrival it was apparent that the situation was serious and the Sub Officer sent a request for a further pump at the same time informing Control that the Island was in danger of flooding. He then returned to his station and sounded the siren, using the wailing note in the hope that this war-time alert would make the inhabitants aware of the danger;  he also fired two maroons with the same intention.

Divisional Officer Bell had been informed of the initial message from Canvey and left for the Island. On the way, he observed considerable flooding on the Pitsea and Vange marshes end upon, arrival at South Benfleet shortly after 2, a.m. found the road between the Church and the railway station, flooded to a depth of up to 4 feet. He reported this by wireless from his staff car.

Meanwhile, a water-tender, with Sub Officer South and crew from Station 24, Hadleigh, sent in response to the message from Sub Officer Griffiths, had negotiated the bridge to Canvey, but were prevented from proceeding further by the flood barrier which had been erected at the bridge entrance to the Island. By clambering from their appliance on to the sea wall the Sub Officer and his crew managed to gain access to the Island through deep water. A motor coach was standing at this point and the Sub Officer persuaded the driver to take him and his crew to the fire station. On reaching the station he saw an appliance leaving, and requested the coach driver to follow it, but the coach was forced to stop at the junction of Furtherwick Road and High Street, owing to the depth of the flood water which was waist deep, and flowing along the High Street at considerable speed. To get across the street the firemen were compelled to link arms.

After making a quick survey, the Sub Officer discovered a boat in a yard nearby and requested the use of it. With this boat and by the use of lines, this crew were able to rescue many trapped people. 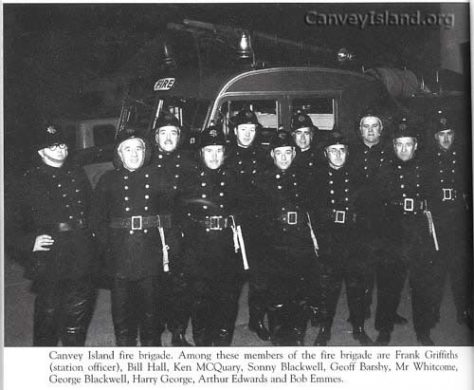 During this period the crew from Canvey were continuing their efforts and were assisting many people to safety. The Sub Officer opened the Primary School at Point Road to prepare a reception centre. He found a hand bell and toured where possible, ringing the bell and arousing people to their danger. The Leading Fireman at the same time opened the Memorial Hall, High Street, also as a reception centre.

Soon after 3 a.m. conditions on the road at Benfleet railway station improved sufficiently to enable the Divisional Officer to get on to the Island and to the fire station. He arranged for the Hadleigh water-tender, which had been left near the sea wall, to be taken to the scene of the flooding, and then made a survey of the Island to ascertain the extent of the disaster. He found that, with the exception of parts of Canvey Road and Long Road, the whole of the Island was under, water. The part most seriously affected appeared to be the area beyond Haystack Corner. Rescue operations were in progress by County Fire Brigade personnel, using many types of craft including large zinc baths and inflated rubber rafts. The rescued people were removed to reception points in the towing vehicle from Canvey and other conveyances,  including water-tenders from Hadleigh and Rayleigh,

At this stage the most urgent need was for more boats. Many people were still marooned and suffering greatly from cold and exposure. Upon the arrival of the Deputy Chief Fire Officer the possibility of obtain­ing further craft was considered and contact was made with a number of sources where boats were thought to be available.  At about this time a number of Army lorries of Q.L. type arrived and thereafter the people rescued were dealt with more quickly and removed to the Long Road centre in these vehicles.

Further crews, some from Metropolitan Essex, arrived and were immediately set to work in rescuing people. As more boats became available it was possible to direct them to pick up people from specific buildings and localities. The areas most seriously affected were searched and people trapped in roof voids were brought out and, where seen, the dead were recovered. The Chief Fire Officer visited the Island to make a personal investigation of operations soon after 10 a.m.

Divisional Officer Bell was relieved at 2.45 p.m. to enable him to supervise and co-ordinate rescue work in other parts of his division. 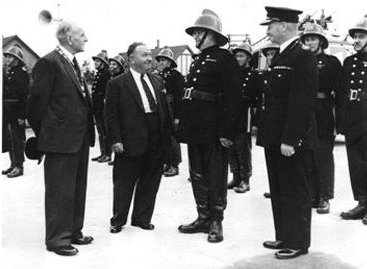 Frank A. Griffiths receiving the BEM

Preparations were made to work through the night and at 5.40 pm an emergency lighting unit was sent to the Island followed shortly after 6 p.m. by two pumps and crews from Station 37, Dagehham, and Station 42, Walthamstow. By 11.35 p.m. the position was easier and only occasional rescues were being affected. The water had affected land communications which from the start of the flooding had been uncertain and spasmodic, and although the Brigade assisted the G.P.O. by pumping water from cable-ducts, shortly before 11 p.m. telephonic communication between the Island and the mainland broke down completely and messages could be passed only by wireless.

During Monday 2nd February, Brigade personnel continued to assist individuals-who wished to be taken from the Island.

By Tuesday all visible and known trapped persons had been removed to the mainlandaend plans were made in consultation with the police for a systematic search of the Island. Volunteers from “B” Division, including a number of part-time retained members, assisted in this work which lasted throughout the week, using military DUKWS, vehicles supplied by Pest Control Ltd, and boats. Fifty-six bodies were recovered and passed to the police.

All County Fire Brigade men were withdrawn by 11th February, with the exception of those attached to Canvey Fire Station,

Immediately the task of helping to remove residents was completed the Engineer and Surveyor to the Canvey Island U.D.C. was offered the assistance of the Brigade in pumping away flood water. Pumps and men for this purpose were sent to Sewage Stations, Electrical Undertakings and Schools and every request was satisfactorily dealt with. 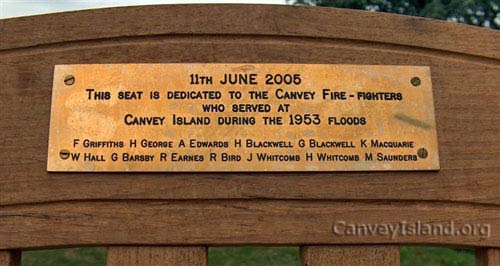 The plaque on the Memorial Chair situated outside Canvey Firestation