I first met Bill Beaver in the late 1980’s when he was a member and I was a helper at the WRVS Luncheon Club in Poplar Road.  His story was published in the local paper and he was the talk of the club.  I remember Bill as a modest and very likable man who sadly died in 1989. This story is told with the help of his own words written many years ago.

When the club known as the Rendezvous Club burnt down in the late 1920’s it was decided Canvey needed its own Fire Brigade.  The Rendezvous Club used an army type hut sited where the library is today. Like most of the buildings at that time the hut was built of timber.  The Fire Brigade that covered Canvey was based at Benfleet but that day they were at the Southend Carnival.

The Council acted and asked for volunteers and duly interviewed them in the Council Office which at that time was a bungalow called ‘Lawns’ on the corner of Gafzelle Drive.  Among the men who were interviewed was Bill Beaver. 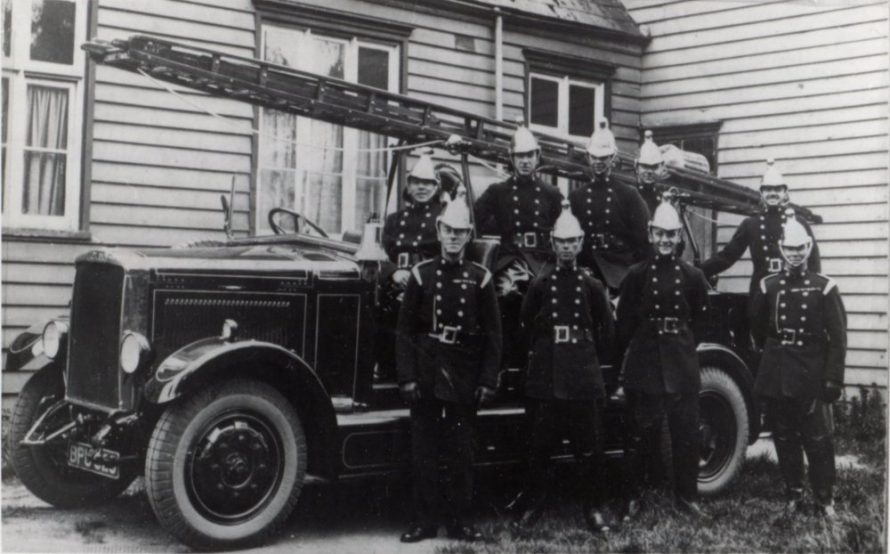 The new fire engine and crew outside the Village Hall. The fully equiped engine cost £1200

The first Volunteers were :

Here Bill writes about his time as a volunteer:

Our first equipment was a builders barrow and ladder, lent by Franke the builder and we used to borrow a hose, standpipe and key from the British Legion who had headquarters at Hartfield’s Parade in the High Street. 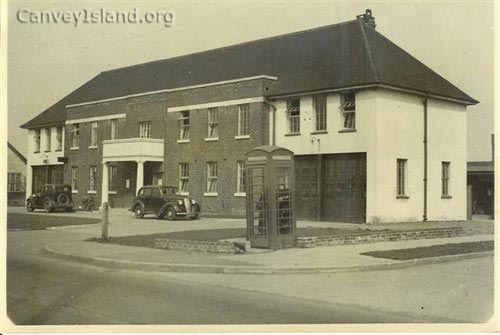 The Council Offices claerly showing the Ambulance and Fire Stations

When the new Council Offices were completed there was an ambulance station and a fire station and a recreation room with billiards table etc.  We had a van until the new fire engine arrived.  We were all kitted out with uniforms and brass helmets, the Captain and 1st Officer had silver plated helmets.  We had a drill night every Thursday and our enthusiasm made up for our lake of experience.  Then we went to Southend Fire Brigade for some basic training. So with common sense and our own drills we would be able to deal with any fires that occurred to the type of property on the Island at that time.

The method of calling for the Fire Brigade was by the firing of a maroon.  This caused me some problems at times because the bungalow where we lived had asbestos lined walls. There were occasions when one of my three children would turn over in bed during the night and bump against the wall, this would awaken me and I have rushed to the fire station thinking it was a maroon sounding, only to find the place in darkness.

We had a club and we were given a room at the black timber bungalow which had been the home of the sanitary inspector, Mr Williams.  He owned the land where the new Council Offices were built.  We had a licence to sell liquor and cigarettes and we played billiards and darts against the local teams.  We really enjoyed the social side of the Fire Brigade.  At Christmas we had a wonderful “children’s parties” subscribed to by local business people.

We had some amusing incidents at times, on one occasion we were called out by the police, as a bungalow was thought to be on fire inside for smoke was issuing from the windows.  There were lace curtains, we could see no actual fire but in one of the bedrooms there appeared to be someone in bed.  We could not get any reply from our knocking and calling, so we started to prise the window sash open with an axe, but the whole window frame fell out.  We gained entry only to find sulphur candles burning in each room.  Whilst we were fixing the window frame back the police had contacted the owner, who had let the bungalow to some folks who had left it with bug infestation.  The lady owner had lit the candles and returned home to Stepney.  The next day a very irate, plump lady came to the fire station and told us what she thought of Canvey firemen in some very flowery language. 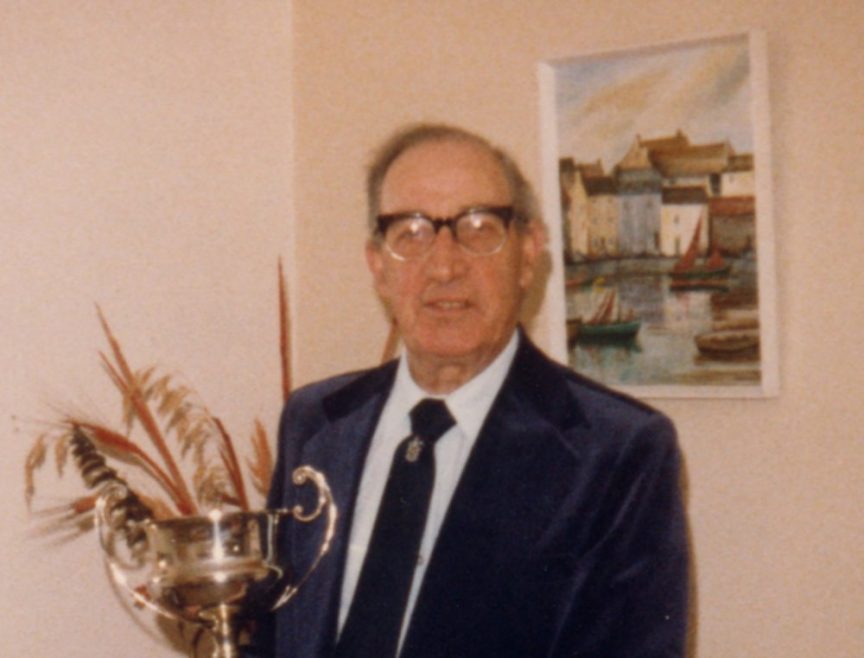 Of course in 1939 at the outbreak of war, the Canvey Island voluntary fire brigade was taken over by the A. F. S.  I left and served as a professional fire fighter during the war at Shell Haven Oil Refinery where of course there were fires of a different kind, sometimes burning for many days.  I used to cycle from Canvey to Shell Haven for each shift which was 13 miles each way, during rain, snow and The Blitz and was only late on one occasion, but that’s another story.