A Memory of the War on Canvey

Send in by her daughter

The following has been transcribed for ease of reading but you can see the original in the gallery below. The following is an account of feeding the soldiers at Walkers Stores during the war written and typed up by Frances Townsend’s mother, Rita, when she was in her 80s.

It was September 1940. My mother and I were working in the little grocery store that also had a small adjoining café at the side. Well, an important looking staff car, a flag displayed on the bonnet, drew up outside. With a smart salute the driver opened the door for the Royal Artillery Officer. Cane tucked under his arm, in he came.

“Mrs. Walker?” he addressed mother, and she being a soldier’s wife almost jumped to attention herself. “Yes sir, I’m Mrs. Walker”. This officer had come on behalf of the Army to ask her if she would cook and provide two main meals a day for a unit of Artillery Gunners temporarily, until they had built their own cook­house in an Army Camp in the farmer’s field at the side of the shop.

Mother and I looked annoyed. We said that we hadn’t got the facilities and the cafe was too small to seat a unit of men, “No problem there”, said this officer. “The men will be marched over in relays and you will have all the help we can give you”. It was agreed.

True to his word, he sent soldiers detailed to erect a huge marquee-type army tent with long trestle tables and benches on a small area of ground behind the café. My father helped here. As food was rationed we were issued special chits by the Army for supplies: meat, milk, bread, etc. My parents employed four women to help with cooking and serving meals. We were ready.

The first day it was ‘Action Stations’ for us all. The sound of marching feet, a loud command of ‘halt’ and a corporal sent in the first batch of men for their dinner.

We settled down to a regular routine of hard work. After while we got to know and recognise the soldiers by their names add nicknames and there were some very funny ones. It was a happy time although there was a war on and we had to manage without so many things. The boys showed us photos of their sweethearts, wives and children.

But there were times when the enemy German planes flew a route up the Thames, their aim to bomb London. The air-raid warning sounded and the soldiers rushed to fire the big guns. They boomed out and the vibrations from firing would break the gas mantles in the cafe and pots and pans flew around. If the raid was at night, the Jerry planes dropped bombs down the searchlight’s beam, trying to get the big guns of ours.

Eventually the Army cook-house was built and our task was finished. At the time I was twenty years old, but even after all these years I still remember the cheerfulness, unity and pride of the ordinary people at that time. 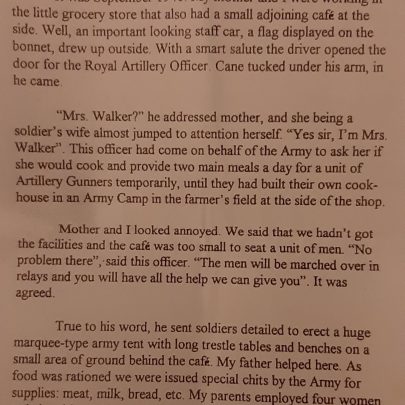 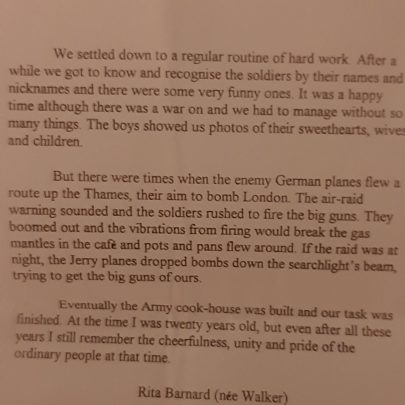