By the late 1960’s the need for more storage capacity of LNG (Liquid Natural Gas) was apparent to ensure reliability of the ever increasing demand for gas in the UK.

A decision was made to build four frozen inground tanks at the terminal, each capable of holding 21,000 tons of LNG. 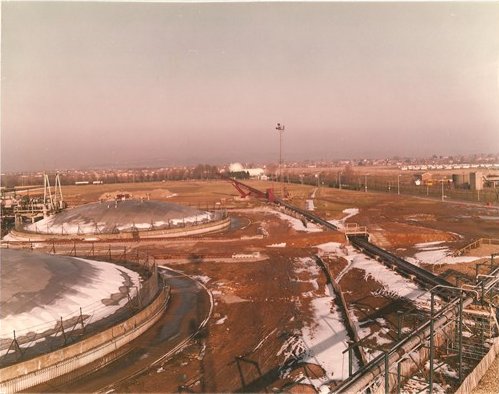 Inground Tanks with conveyer in place ready to import sand. The ice on the ground is not caused by the permafrost but a recent snow fall.

The construction was achieved by sinking a series of double pass tubes approx. 130ft.into the ground with the same diameter. This was repeated four times to form the tanks. The tubes were then linked to a brine unit which pumped the refrigerant through the tubes, gradually freezing the ground. The freezing process took a number of months until the desired temperature was achieved. At ground level large concrete ring beams were constructed to form the top of each tank and support the Aluminium Dome roof that would be put into place once the digging was complete.

The digging commenced and as the ground was frozen a considerable amount of mechanical equipment was used including JCB’s, Cango’s etc. Working conditions gradually worsened as the holes became deeper due to the freezing conditions and air quality. Air was continuously pumped into the holes and extraction fans were used to remove the exhaust fumes created by the mechanical equipment. During the digging the ground was kept frozen by the brine units to keep the ground stable and free from collapse.

The spoil from three of the tanks was continuously removed from the site by a fleet of lorries, some being used to raise the height of Canvey’s sea wall, from Canvey Road at Waterside Farm in a Westerly direction. Some of the material removed during the excavation was ballast which is part of a seam running through the Thames. This ballast seam would eventually become a problem by forming underground fissures linking all four tanks and creating excessive boil off from the LNG when the level reached the ballast seam. The spoil from the forth tank was retained on site in case it was required at a later date.

Whilst the digging continued, the roof framework was being constructed in a building on site by a company called Hamilton Roofs. The huge frames would eventually be lifted into place by giant gantry cranes running on railway tracks. Once the digging was complete the floor area was covered with concrete slabs. The roof frames were now lifted into place and work began fixing the Alumium plates and insulation to the frames. Each tank had two submersible pumps installed which would feed booster pumps that were sited at ground level that pump the gas once evaporated into the National Grid .

Once the tanks were completed they were filled with LNG @ -160c and potentially increased the Terminals capacity from 24,000tons to 108,000tons.However it became apparent the tanks could not be used to their full capacity because of excessive boil off problems caused by the fissures in the ground which raised the temperature of the liquid. There were also problems with ground movement which required constant realignment of the pipe work. It also became apparent there was a problem with Permafrost which was growing. It was feared this would affect the piles supporting the above ground tanks and the seawall at the terminal boundary. To counteract this double pass pipes to form a radiator were sunk into the ground and a warm solution was pumped round which stopped any further growth of the Permafrost. A constant check was carried out on the subsoil temperature using bore holes and contrary to the belief of many local residents the Permafrost never came anywhere near the Terminal’s boundary. The radiator system was kept on for a number of years after the tanks were decommissioned to shrink the Permafrost.

Due to the problems and the ever increasing cost of maintaining the tanks, a decision was made to decommission them. This was also a huge undertaking as the tanks had to be completely emptied of the LNG them purged with Nitrogen to inert the voids before infilling could start.

Preparations for the decommissioning took a number of months.This included building a temporary jetty on Scars Elbow with a conveyor belt running via an underpass under the main Terminal road to an area adjacent to the Inground Tanks. Dredgers operating on a continuous basis brought in sand dredged from the Maplins to form a spoil heap with sufficient material to fill all four holes.

At the same time the two original 1000ton tanks used for the Terminal pilot scheme were recommissioned to build up a stock of Liquid Nitrogen ready for the purge. Due to the large volume required, (which had to be delivered by road tanker) to supplement a shortfall in the UK, supplies were brought in from the continent.

Huge gantries were erected running on railway tracks and fitted with Nitrogen purge system and gas monitor equipment to be used whist the infill was in progress.

Although the tanks would be purged prior to the infilling it was realised there could still be pockets of gas in the fissures running between the tanks so it was imperative there should not be any source of ignition.

Finally, with everything in place the infill started and was a complete success thanks to the expertise of the British Gas Engineers and McAlpine the contractors who built the tanks in 1969 and thirteen years later had filled them in. The spoil left on site from the original was now used to top off the sand infill.

All that remains today are four mounds of grass covered earth.

I feel, had the tanks been lined with aluminium like the above ground tanks a lot of the problems encountered would have been avoided.

As a point of interest, a similar inground tank constructed at the same time as Canvey’s at Arzew in Algeria was a success due to the different type of ground and lasted until 2006 when it was successfully decommissioned and filled in. Two of Canvey’s old British Gas personnel were consulted by the company carrying out the decommissioning on the methods to safely carry out this work.