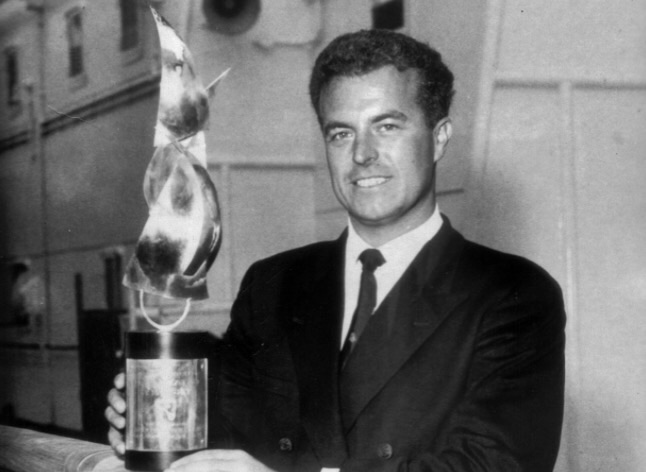 John Fisk with the ICCT

John was born in 1931 he started sailing at a very young age and had a generic sailing dinghy which he sailed in Smallgains creek. This little vessel was called “Koo kriki” 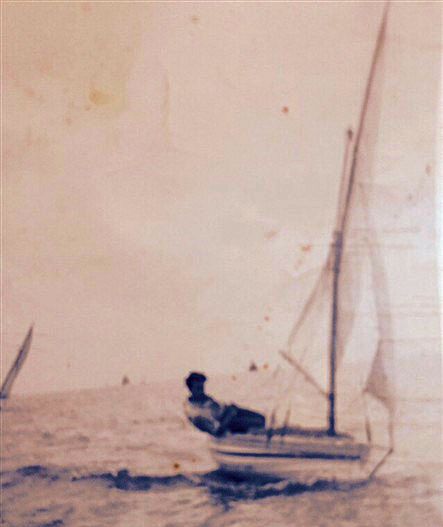 The name conjures up the excitement of a young lad speeding along falling in love with the excitement of sailing. This passion was to last a lifetime and take him into international waters and gain him world class status. In December 1948 a Firefly sailing dinghy was delivered to John on Canvey, it came by train from Fairey Marine, Hamble near Southampton, her number was F558, he was 17. He Started to win many club races at the Island Yacht Club with his Firefly. The only name found for her was Dracula however this was after she was registered to a new owner from Bexhill on sea Sussex. 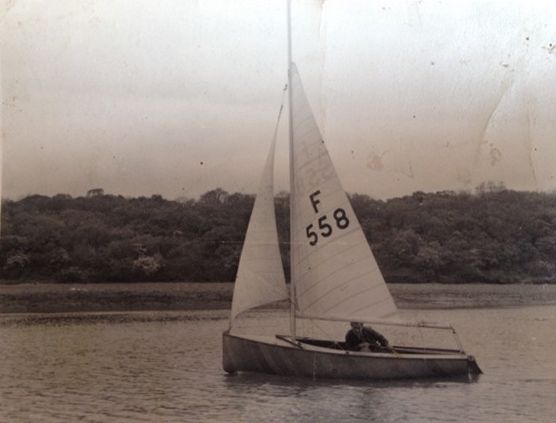 John in his Firefly

A young couple called Marie and Reg Winters came down to their houseboat on Smallgains Creek at weekends, their converted Thames Lighter was moored next to the old club house. They were Island yacht Club founder members who had seen the upsurge in young people sailing around the creek so decided to form a Junior section to the club. It was around this time that John Fisk joined this wonderful gathering. Marie and Reg had no children of their own and so the junior crowd were family to them. They organised the races, the social side and even the young people’s birthday parties paying for many of them. It was in this atmosphere that Fisk sailed the Thames Estuary and met his lovely wife Jean herself an excellent sailor. ( See a “A Brave Young Woman”)

John went on to buy a National 12 called Blue Moon N560, some would say faster and lighter than the Firefly it was John’s success with her that inspired John Manly to buy Nola N394.

John’s Father was the Canvey builder Fredrick Fisk, John is recorded as building too but most people know him for establishing the very successful Canvey Estate agency John Fisk and Co.

After completing his national service in the navy and returning to Canvey Island, his passion turned to twin hulled sailing boats. He bought a Shearwater Catamaran from the Prout Brothers and during three years of competing he rarely lost a race and gained a formidable reputation in yachting circles winning the first national catamaran race, held at West Mersea and the national title in 1956.

John Manly wrote in his memoir :-

“The name Prout became famous when the Shearwater Catamaran was born. It was a beautiful boat and at the time, one of the most exciting boats to sail in Britain, it probably still is. The three sons Roland Francis and Bey who pioneered the Shearwater went on to build ocean going Cats. “The name Prout was well known on Canvey well before the last war. Old man prout used to make fold up canoes that had a wooden frame with stretch bars to keep them rigid. They also made coracles built in the same way, very light and easy to carry, they were often used as tenders for bigger boats. After the war Roland and Francis took over the business and developed the moulded plywood canoe that must have given them the idea of the Cat because shortly after that I saw them in the creek with two canoes lashed to a timber frame six foot apart Bermudan rigged and going like a bomb.” 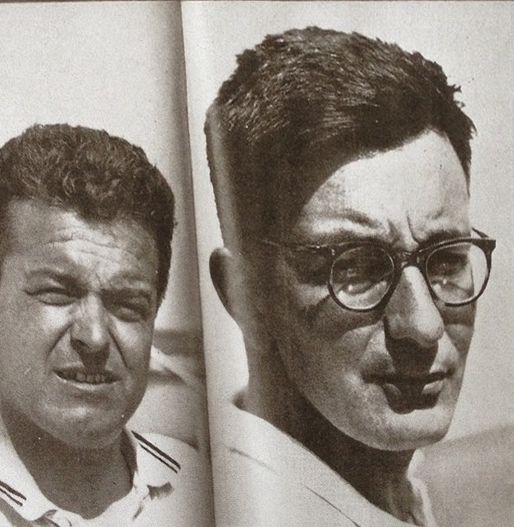 John Fisk met a young Scottish boat designer called Rod Mcalpine-Downie   at the London boat show. Rod, aware of John’s sailing reputation invited him up to Scotland to try out one of his home-designed and built boats. From then on John and Rod became sailing partners. In a new catamaran, Designed by Downie, Fisk was runner up in the Royal Yachting Association race at West-Cliff-on-Sea in in 1958. In THAI MKIV, he won the next year. In 1959 the American periodical “Yachting” sponsored a ‘One of a Kind’ regatta. The most successful catamaran in this event was “Tigercat” designed by Bob Harris of New York, which was considered by many to be the best in the world. In Great Britain, John Fisk, together with Rod MacAlpine-Downie had won the R.Y.A. ‘One of a Kind’ series with their Thai Mk IV. Downie and Fisk considered their boat superior to the Americans, and thought that, as far as catamaran design was concerned Britain was ready to prove it’s supremacy.  A friendly challenge was issued. It had to come from a yacht club and John was then commodore of The Chapman Sands Sailing club Canvey Island so it was in the Club’s name the challenge went out. The rules for the race were up for discussion so one night, in Rod Mcalpine’s  house four key men thrashed out the rules. They were Reg White (1976 Montreal Olympic  Champion and boat builder), Bob Fisher (Winning crew in the 1967 ICCT and journalist) and John Fisk (chairman of the IYRU multihull committee and Commodore of Chapman sands Sailing Club Canvey Island) John detailed his plans for a best of seven race series much the same as the America’s Cup. He said, “It will be like a Little America’s Cup.”

It was 1961 MacAlpine-Downie had designed a new wooden constructed catamaran called HELLCAT. In order to be able to  compete for the ICCT the Catameran had to fullfill the class criteria of a C Class catamaran. She had to be no more than 25ft long 14 ft wide and her sail area had to be 300 sq ft she had long powerful hulls and a simple high aspect ratio rig. She was shipped to the Sea Cliff Yacht club Long Island, New York on the Cunard liner, MAURITANIA. Fisk and Downie’s challenge was successful they won four races to one. John Fisk bought the ICCT Trophy back to Chapman Sands Sailing Club Canvey Island ……… triumphant . 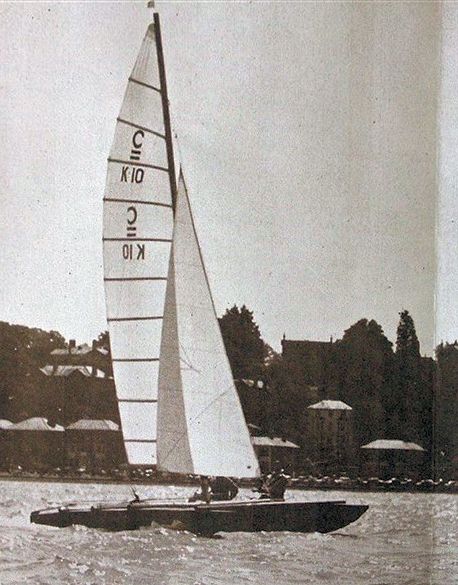 The next year 1962 the American’s came to Britain to try and wrestle the title away. Chapman Sands for some reason had neither the waters or the facilities to accommodate the race and so it was held at The Thorpe Bay Yacht club near Southend. Fisk and Downie defeated them again with a 4-1 win in Hellcat 11 a fibre glass constructed boat, sloop rigged with canvas sails. Britain held the ‘Little America’s Cup’ against Australian and American challenges for the next 7 years. Fisk went on to win the British championship in 1963 in BOADICEA his own design but following more successes, ill health obliged him to involve himself more in the administrative  aspects of yachting. John Fisk, as Chairman of the IYRU Multihull Committee, was a selector in the trials to find a suitable class for the Olympics. He  worked tirelessly to ensure this happened. He was rewarded when the “Tornado” was chosen for the Montreal Games in 1976 and his old friend Reg White won Olympic Gold in her. John managed to attend, despite suffering from the cancer that was to take his life shortly afterwards aged 46 .

The (Big) Ameria’s Cup may appear superior to the C class race but it would be interesting for John to see that it is now raced in Mega Multihulls for which his ideas were the inspiration.

Canvey Island and this very talented determined man played a very large part in the early days of Catameran design and racing. It seems his upward trajectory would have known no bounds and his loss so young was lamentable. 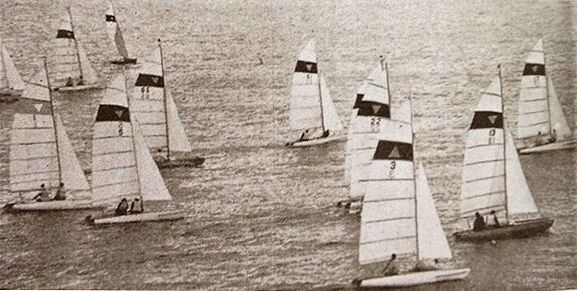 My Dad started this thread in his memoir, a rather grand name for 300 typed pages detailing his life, the major part, on Canvey Island where he was born in 1928. Then his friend Derek Kennard sent me a package containing pictures of early Canvey, one of which was of John Fisk sailing his Firefly F558. I felt that the people that administer the Firefly data base might like to add F558 to their archive. A lovely man called Peter Lanham wrote back delighted and asked if the man I was asking about was THE John Fisk of “The little America’s Cup”. He sent me the details of the Firefly’s delivery and lots of information about John’s amazing achievements and kindly corrected my sailing terminology (dinghy not boat) and this story surfaced. Bob Fisher journalist and friend of Fisk wrote some wonderful articles and “The Dinghy year book” held more interesting information.

Kevan Bloor, Mr Brookman and Ed Willet of the National12 owners club were very helpful one of them very kindly went up into their loft to look up the records for Blue Moon and Nola N394. 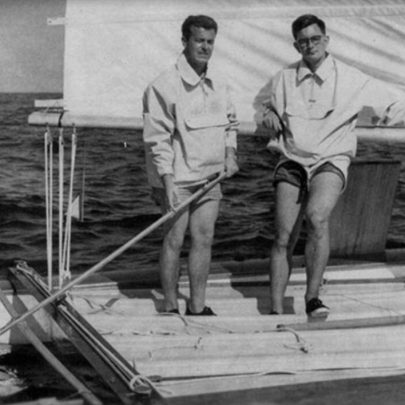 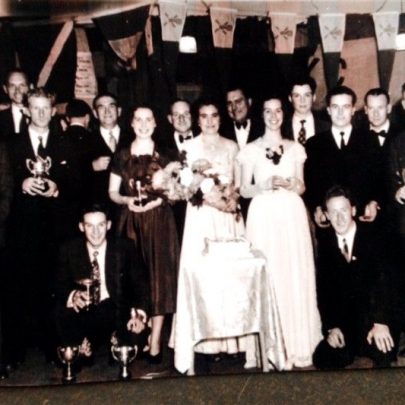 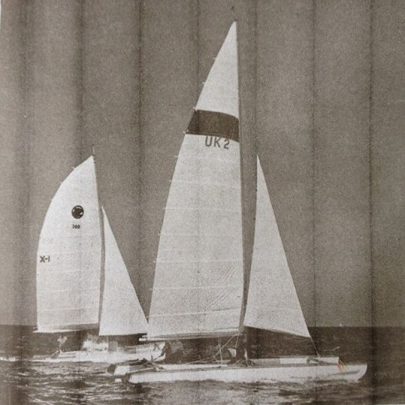 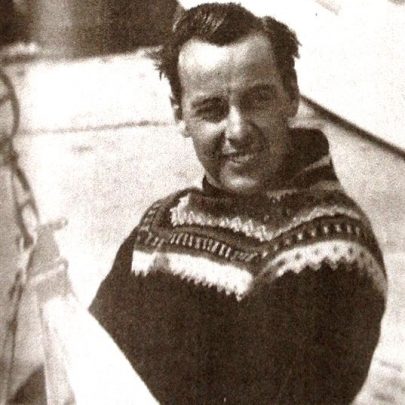