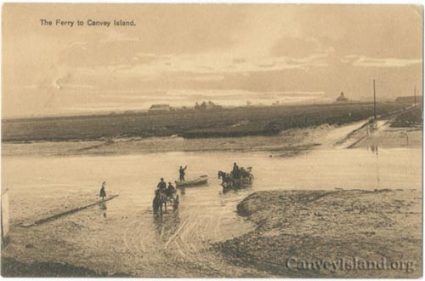 All the Facts and Figures about the crossing as compiled by David Dowd in the 1970’s.

In the Fifteenth century the fine applied for not keeping up the Sea-Walls was called ‘bi-scot’ and was about two shillings a perch of damaged wall (i.e., 2 p a metre). An account-book ‘bought for the yous of the survaires of the Cassey and footbridges and roads belonging to Canvey island’ dates from 1742 to 1789 (Ref.: E.R.O. D:P 270:21.) and indicates that every year one or two ‘fraits’ (i.e., barge-loads) of gravel were delivered to Hole Haven for road and causeway repair.

It took two or three men from two to three weeks to make use of these fraits, at a cost of from £10 to £ 30 for their hire, thus:

Apart from gravel and stones, chalk, flint and bushes were also employed in bolstering the walls. The surveyors were to maintain the sluices and counterwalls, to provide ‘handfasts’ for the footbridges over the fleets, care for the Chapel and supply the annual dinner; thus :-

The bridges mentioned above, being probably only one plank wide, traffic other than pedestrian had to use the causeway. This amenity was variously spelled according to the writer’s interpretation of the local dialect pronunciation; as cassey (1761) or caseway (1774); and occasionally referred to as the ‘horse-dam’ indicating its main use at the time.

As mentioned for road maintenance, the causeway was also provided with a regular supply of gravel – to replace that gradually washed away by the tides. If the items mentioned in the Surveyor’s Account Book were typical and annual – i.e., paying to arrange supplies from Laindon gravel-pit; cost of a barge-load of gravel; wages for ten day’s work – amounting to, say, £ 3.75 per annum – this was a heavy burden on the Canvey ratepayers.

When cement became available a new technique was tried : that of filling buckets with the mixture and, when set, half-burying the upturned resultant ‘stepping- stones’ across the Creek – but though the remains of the gravel can still be seen, the stones have all gone (except for a sample outside the old Council Offices).

Shortly after the Wright’s sale of the ferryboat, after much local long-term clamour for a bridge, a Traffic Census was undertaken by the Ministry of Transport from 15 to 21 August 1921 – it showed that the following was the break-down of ferry-boat & causeway user types from a total of 18,954 crossings (i.e., individual, not ferry-boat, crossings):
Census of Causeway & Ferry Commuter Crossings, August 1921

Note also that by this time there is no mention of ridden horses, since farmers would use traps and the less well-off could not afford to keep horses at all.

Of course the ferry became totally redundant on the opening in April 1931 of the Bridge.

ROADS ON AND TO CANVEY

From 1793 to 1820 local turnpikes (including the Tarpots to South Benfleet Road) were administered by Hadleigh Turnpike Trust. Until 1830 the road access to Canvey came across Benfleet Downs, but, about then, the Court of Quarter Sessions agreed an application to divert it through Benfleet proper and it now wriggles its way under the railway before turning south to the bridge. At Michaelmas 1706, James Snesher and a Mr. Ballard were indicted for neglecting this highway.

On the Canvey side a new approach road for the Colvin Bridge (opened April 1931) was formed from a straightened-out adaptation of an ancient track, and it is now known as Canvey Road. After the bridge was built, with the attendant increase in traffic, a road modernisation programme was found to be necessary – motor vehicles were faster and needed to pass each other – and the High Street (1) was lowered (it would have been dangerously high should any vehicle have overridden the edge).

The new second access road to Canvey crosses East Haven Creek at the same point as had the old Roman Road – it was the A 1301, part of the A 30 scheme from Trumpington in Cambridgeshire to Northwick Corner on Canvey (one wonders if anyone has actually done the whole journey which road signs invite you to do).

The Services Census of November 1950 relates that Canvey had : –

Census of Mains Services to Canvey, 1950

Of 3,839 Canveyites regularly commuting across the bridge, the 1951 Census has this to say:
Census of Canvey Bridge Commuters, 1951