A look at old Postcards

We often hear the phrase: “Those were the days…” But were they? Janet’s recent interest in Marie the Palmist prompted me to take another look at some old pictures.
This must be very early in Canvey’s development – 1920s going by the fashion – and well worth a study in today’s context. Roll-films were already a commodity, but I have also seen early pictures that were quite obviously taken on plate cameras. 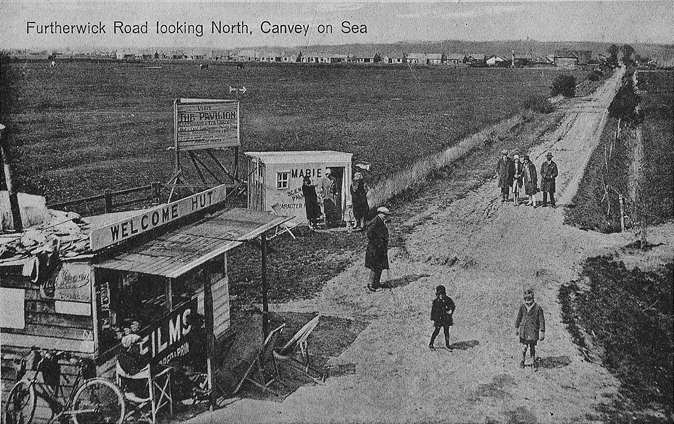 We see at top right that rarity on Canvey at the time, trees. We know they marked Furtherwick Farm, but just check out the Wild West (linear) settlement to the west of it. Horses graze on the large field to the left. Furtherwick Road was raised, flanked by ditches to either side, being one of the oldest roads on the island. We must here be in the middle of the car park/open space on the sea wall with the future Labworth Café and Monico to our right. It looks a long road, but it must have been walked by sufficient numbers to make it worthwhile for such facilities as having your palm read by ‘Marie the Palmist’ and to put a fresh film in the camera at the ‘Welcome Hut’.

The way everyone poses out on the mud in their Sunday best for the event of photography that was still something new… Except for the two people on folding chairs with the bicycle by the hut – they’d seen it all before. ‘Films developed & printed’ and ‘Nut Brown Tobacco’ are advertised. Now films are already a thing of the past and any colour tobacco is frowned upon. Is that Marie herself in the open door in her warm white cloche hat? ‘Scientific Palmist. Character Readings’. In a cobbled-together hut supported by angled staves? WW1 had given women a new importance and a taste for a new freedom, which rebelled against Victorian feminine frills. The new emancipated women cut their hair and wore trousers. The severity of the cloche hat is in line with that movement. 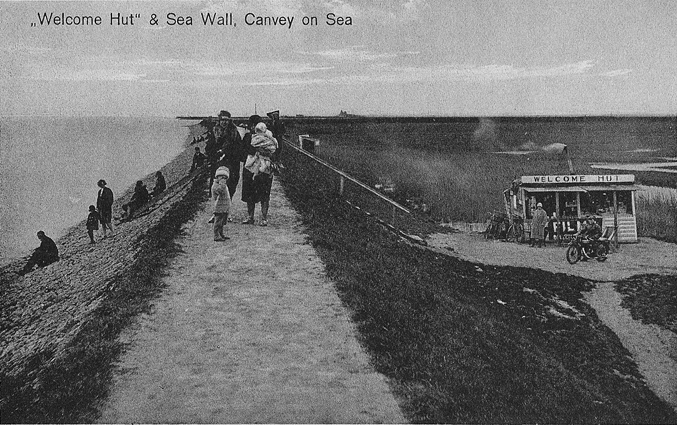 The next postcard, likely from about the same time, is looking along the sea wall on a cold and blustery day. Visitors are wearing fashionable hats and fur wraps. Babies are carried. Families and boys in school caps risk the rough stones on the seaward side of the wall. There can’t be much sunshine, shadows are barely noticeable. A flat-cap motorcyclist made it to the sea wall down Furtherwick Road. We now know where the other bicycle was kept. That couldn’t possibly be ‘Marie the Palmist’ in her warm hat manning the ‘Welcome Hut’ under full steam, wafting its aroma towards the wall?
The hidden story in this picture is the way it shows what happened in 1953. The stony side of the wall would hold, but when the water seeped over the top, it washed away the grassy side, undermining its strength. Perhaps if both sides had been clad in stone…?