The Claxton Family of Canvey and Benfleet

Most people will remember the Claxton Furniture Store on the corner of Furtherwick Road and Oak Road and some will remember Allan Claxton’s removal business here is just a little of their history. 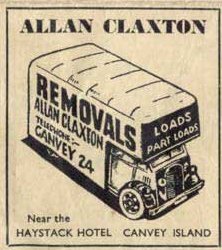 Advert probably from the 50s

The Claxton clan originate from the Claxtons of Flempton in Suffolk. The father William Alfred, known as Alfred, was born in Flempton in 1881, he married Mary Ann Wright in Lambeth in 1901. By the time their first born, Allan, was born in 1902 the family had moved to Treorchy, Glamorgan. They stayed in Wales until at least 1915 when the youngest son Harvey was born. As far as I can find out there were eight sons and one daughter. When they actually arrived in Benfleet/Canvey I am not sure but the eldest son, Allan when he returned from Canada on the ‘Andanis’ in 1922 stated his address as Leigh Beck, Canvey Island.

I have not been able to find Alfred in the Electoral Register in 1918 in Canvey or South Benfleet and his sons would have been too young. Dowd has stated in his Canvey Cyclopaedia that Alfred and his sons Allan, Ollie and Victor were un-licensed Cab Drivers on Canvey but does not give a date for this information. Both Alfred and his son Allan do appear in the South Benfleet Electoral registers in 1929. Alfred and Mary Ann were living at ‘Ches Nous’ in London Road and Allan and his wife, Winifred, were living at ‘Merville’ in Oakfield Road. Alfred died in 1934. 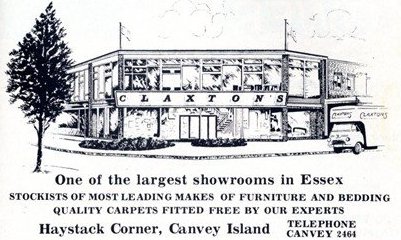 Advert from the Essex Country Magazine 1977

By 1937 Allan Claxton had started up his removal business, first on Canvey based 1 Knightswick Road then later at Furtherwick Road, which by 1957 had become the Claxton’s Furniture Store. By 1946 Allan had moved from South Benfleet and resided at 16 Sterling Avenue at Leigh on sea. His business expanded to South Benfleet when he opened his removal business in the High Street.

Allan loved using his cine camera and captured many scenes of Canvey in the 1930s and 40s that can be seen here. Allan Died in 1980.

Ollie who had also been an unlicensed Cabbie on Canvey moved to Stroud Green, London as he stated on his return trip to Southampton from New York on the Queen Mary in 1955 with his wife and son. He was then still working as a driver. Ollie died in 2003.

Victor, another of the brothers who was an unlicensed cabbie on Canvey, I have been unable to find anything else about him, but I think he was still local as he died in Southend District in1982.

There was another brother Derick who I have not traced since Wales.

Next was a sister Muriel who married William Evans she also stayed local and died in Southend District in 1983.

Allan’s younger brother Leonard was living at ‘The Flat’, Station Stores in South Benfleet when he married Rose Price at St Katherine’s Church in 1936, his occupation was stated as Omnibus Driver. Rose’s father was George Price of ‘Willow Haven’, Coker Road, Canvey. Leonard died in 1982.

Leslie also married at St Katherine’s to Violet Aldridge in 1939. Her father was William Aldridge who came to Canvey in the 20s as a builder. Violet and her family lived at ‘Cromwell’, Long Road, Canvey. Some of Leslie’s descendants are in Australia and some in the USA. Leslie died in 1989.

Another brother, Francis I have not traced since Wales.

The youngest Harvey married Maude Pheby in 1936. Harvey was also local and died in 1989 in the Southend District.

If anyone knows more about the Claxton family please comment below or email in as Leslie’s granddaughter in the USA is waiting for information.

The Claxton Furniture Store on Canvey as it is today