Born to be a hero

William Edward Sparks was not a Canvey Islander by birth, he chose to come to Canvey where he lived for many years. He wanted somewhere where he could have a boat. 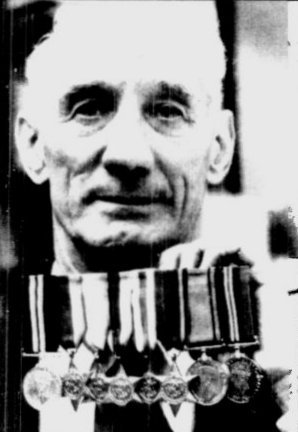 Bill Sparks and his medals

Bill was born in London in 1922 to Christopher and Charlotte Sparks who married in 1917 in Southwark. The couple can be found in the 1931 Electoral Register in Bartholomew Buildings, Seward Street, E.C.1, Williams birth was registered in Holborn. When he was about 15 he lived in Islington where a friend of his at that time was Irene Marshall (nee Holt). According to Irene there was a big gang of kids that used to hang around of which Irene, Bill Sparks and his brother Benny belonged. She also said that Bill always said that one day he would be a hero.

When WWII broke out in 1939, 17 year old Bill wanted to go to sea, but to the annoyance of his father, who had been a stoker, Bill was persuaded to join the Marines. His brother Benny was killed in March 1942 when his ship HMS Naiad was hit by a torpedo from a U-boat and sank north of Sidi Barrani, Egypt. Bill’s father had always told Bill not to volunteer for anything but when he heard about the company Major Hasler was putting together he volunteered giving his reasons as ‘revenge for the death of his brother’.

In December 1942 he was one of the 13 men who trained for a mission behind enemy lines. They trained intensively in two man collapsible canoes not knowing what the mission entailed. There are many sites online where they give full details of the mission called ‘Operation Frankton’ a daring raid on Bordeaux to blow up four of the largest cargo ships there. Or you can see the BBC programme on this site.

Of the ten men who went on the mission all but two were either captured and shot or drowned. Bill was in a canoe with the Major “Blondie” Hasler, the leader of the operation. Bill and Major Hasler were the only ones to survive and eventually return home to England. Bill however was brought back under-arrest as he did not have papers and they thought he was dead. He managed to get away and went home to let his parents (father and step mother) know he was ok before checking in at head quarters. 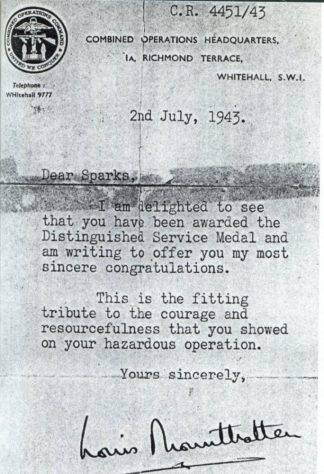 It was in 1943 that Bill was awarded the DSM (Distinguished Service Medal), Major Hasler DSO. As reported in the London Gazette ‘For courage and enterprise’. According to Bill he was dumbfounded and did not tell anyone in case there had been a mistake. He says in his book “When I walked through the huge gates of Buckingham Palace in a brand new set of blues, it was the proudest moment of my life”. Bill continued with his life in the Marines embarking on raids in various parts of Europe and the Mediterranean. 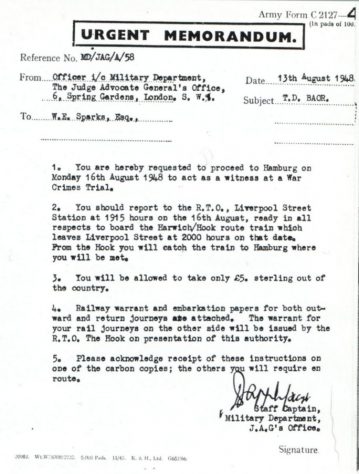 His order to attend the War Crimes Trial

When he was demobbed he applied for a job as a conductor on London Trolleybuses. He says “I rather enjoyed conducting a trolleybus through the streets of London”. To become a bus driver you would normally have to work for two years as a conductor but because of a shortage of drivers Bill did not have to wait those two years. He passed his bus driving test and became a trolleybus driver. But he did not settle into civilian life easily and started to have itchy feet. He took a job as a Policeman during the emergency in Malaya. In 1948 he was called to be a witness at the War Trials held in Hamburg.

Bill had married his first wife Violet in 1947 starting married life at Sandown Road, Stoke Newington in North London. They soon moved on to Loughton where they lived in a council house in Poundfield Road. By then there family consisted of three sons (Two sons from Violets previous marriage were adopted by Bill) and a daughter. The family lived here until 1971. 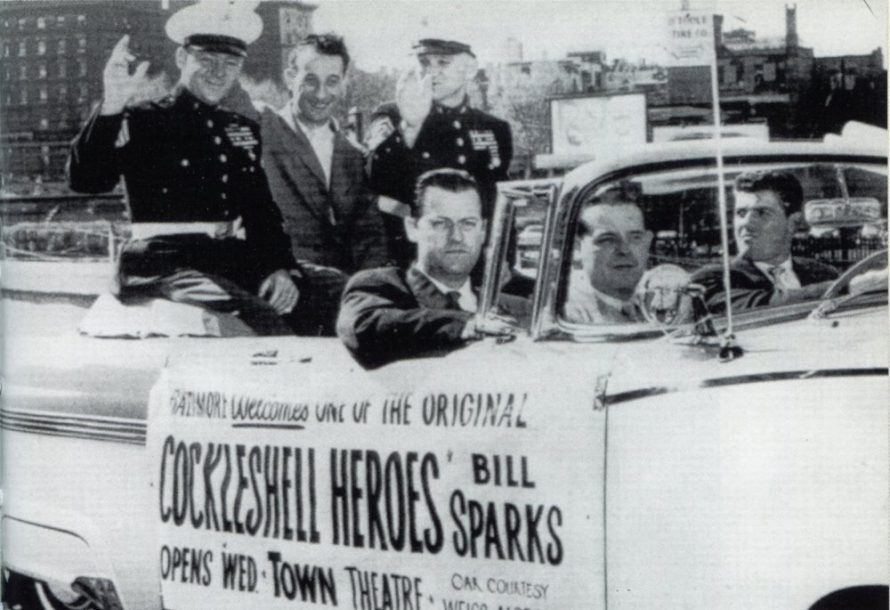 In Baltimore promoting the film. Bill is sitting at the back between two US Marines

In the fifties Bill was approached by a film director who wanted to do a film about Operation Frankton. Much to Bill’s surprise this was real and he worked with Anthony Newley (who played Sparks in the film) and Trevor Howard. The film was premiered on the 16 November 1955 with the proceeds going to The Royal Marine’s Association. This was followed by a premier in France and on to the USA and Canada where Bill spent time touring advertising the film. 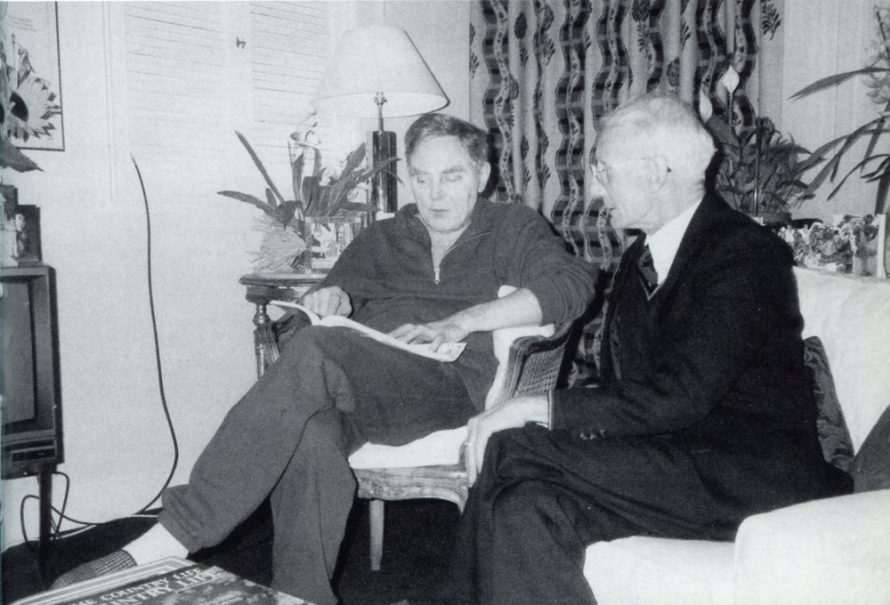 Bill moved to Canvey from Loughton, Essex in 1971 with his first wife Violet after the last of their children left home. Their first home on the Island was a council house in Maple Way. He had wanted to move somewhere where he could have a boat.

Their daughter Gill moved to the Island in 1973, all four of her children were born here. At some point (probably after his wife became ill) they moved round the corner to a council bungalow in Almond Walk. He kept his canoe in the back garden.

During his years on Canvey, Bill was a member of the Conservative Club and the British Legion. 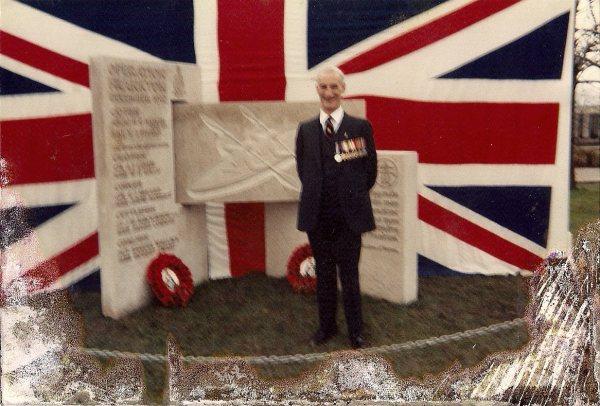 Bill in front of the memorial at Poole

Bill had tried for years to get recognition for his colleagues who did not return from France. (Some of whom had been tortured. Bill was called to give evidence at war trials in 1948.) It was in 1980 that he contacted our MP Bernard Braine who helped him in his quest. A monument was raised in Poole the home of the Cockleshell Heroes which was unveiled on the 11 Dec 1983 thanks to Bill and Braine. 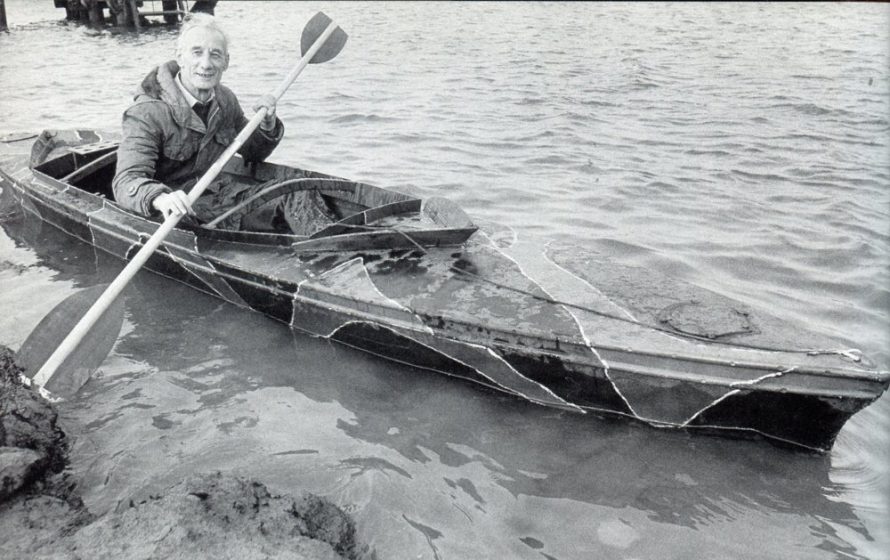 In 1982 his wife, Violet, died of cancer and it was following this that he decided to do a re-enactment of the Frankton Operation by paddling up the River Gironde to Bordeaux to raise money for Cancer. It was in the waters round Canvey that he did his training. He said the journey this time was a lot safer but harder. He was then 61 years old.

In 1984 he married his second wife Irene. Due to ill health (respiratory problems left over from the war) he had to retire early from his job at London Transport. The couple decided to move off the Island in 1986 to Sussex.

Bill was once again in the news in 1988 when due to the change in his pension Bill and his wife found themselves very short of cash and he had to sell his DSM medal. It was sold at Sotheby’s to businessman Lord Ashcroft who stipulated the medal was to stay in Sotheby’s safe and be made available to Bill whenever he needed it. 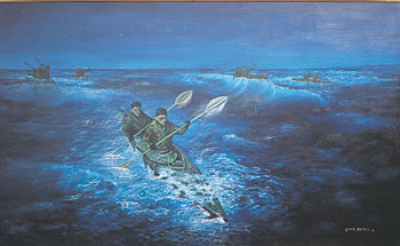 He later went on to write two books about his life and Operation Frankton which are featured in our literature section. He was also introduced to Jack Russell who did a great painting called ‘Cockleshell Heroes’ which we reproduce here by courtesy of Jack Russell Gallery.

Bill died in 2002 and is buried in St Andrew Churchyard, Alfriston, Sussex.

~~~~~~~~~~~~~~~~~~~~~~~~~~~~~~~~
Many thanks to the Evening Echo for the article they ran for us to find out where Bill lived on Canvey and thanks to Bills daughter Gill and many others who have helped to tell Bill’s story. It is hoped that through our efforts a memorial plaque will be placed on the Island later this year.