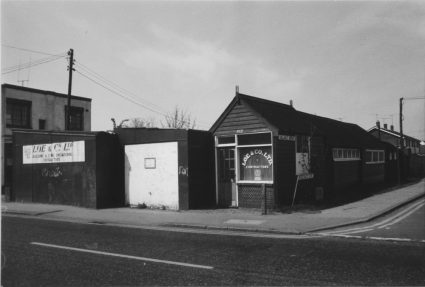 The building is completed
Without the relevant Trustees Meeting minutes and with the Leaders Meeting minutes providing little information, we are very dependent on Len Knapp’s account of what happened in the progress of the building. The Stone Laying was held in torrential rain on the 10th October 1959. The main foundation stone was laid by Mrs. Dean on behalf of the family of Mr. George Brittain who gave the site. The other stones may still be seen, although the original building was incorporated into the new church opened some years later. The service at the Stone Laying was conducted by the Superintendent Minister, the Rev. Tom Sutcliffe. During the completion of the building, one person never left the site. This was the bricklayer “Wally”. Mr. Knapp went to the site every day when he had completed his bakery round. He and Wally cut and fitted all the timbers. However, no one but Wally was allowed to lay any of the facing bricks at the front of the church. He would pick up several bricks until he found one that toned in. Mr. Knapp helpfully describes some details. “The plaster used in the church is a special acoustic plaster from Africa. It is very light like a sponge filled with holes but very hard. This is covered with the usual seraphite, so that there are no echoes and you dont have to shout to be heard at the other end of the hall”. Because of the late arrival of material the opening had to be postponed several times but was finally fixed for the 11th June 1960. “It was the wee small hours of the morning of Opening Day before we had it clean and ready”. Len Knapp records that the doors were opened “by Mrs. J. English of Clacton”. (Did he mean Mrs. J. England a great benefactor of Methodism?) The church was packed with a congregation which included the architects, surveyors, builders, “Wally” and representatives from the circuit. The recently formed choir led the singing. 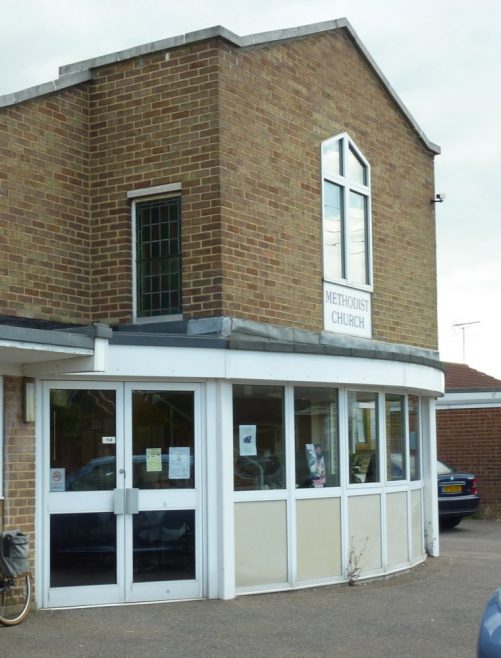 The Church as it is today

The new church was simply furnished, with a small platform at one end on which there was a Communion Table, chairs and a reading desk, with a Communion rail in front. When later a new church was built this rail was incorporated as the centre section of the new rail. Len Knapp’s son made a kneeler for the minister. Between 1954 and the opening the church had shown signs of growth. This was greatly helped by the warmth of welcome, especially by Mr. Jim Barrett who had a “crushing” hand shake. The name of Mr. Jack Porter of Thundersley (later the Rev. Jack Porter) was also mentioned as “a very good friend to us in the early days”. Besides the growth of the Sunday School, units of uniformed organisations were formed, a Young Wives club and though a Men’s Club was formed, it failed to attract men who having spent a day in the City were reluctant to come out again in the evening. When a TocH group was formed on the Island it met at the church. This group started a Hospital Car Service which often provided as many as four cars to take visitors to hospitals. This continued until the Eastern National laid on a service on Sundays. The Leaders Meeting minutes do provide evidence that Class Leaders were appointed, the membership roll reviewed and the discipline maintained. There was a membership of 38 at the time of the opening of the church.

In 1961 the first United Service was held on Good Friday in the Baptist Church. This inaugurated a growing ecumenical spirit which expressed itself in united Holy Week services and other events. The Methodist Church took its own initiatives in mission. In May 1963 two deaconesses, Sisters Edith Wilding and Lois Aubrey arrived to lead a month’s Caravan Mission. Among activities they began was a Sunshine Corner on Tuesdays and Thursdays which attracted “crowds of children”. There was also a twice weekly prayer meeting held in the caravan. A visitation of 550 houses in various parts of the Island was undertaken by the Deaconesses. When Billy Graham came to London in 1965 a coach load from the church went up to hear him. In September 1967 another Caravan Mission was held led by Sister Ivy and Sister Jennifer. Again new contacts were made and the church was spiritually blessed. This was the experience when in 1971 a group of Cliff College trekkers visited the church, sleeping on the church premises and having meals with church members.

Ventures of faith
A venture begun in 1968 is still flourishing. This is the Nursery School. Inspired by Mrs. Dorothy Ducker, wife of the minister, and ably led by Pat Hurd, this project met an obvious need and has continued to do so. Here, as in many churches throughout the country, Nursery Schools and Play Groups have met an obvious need. They not only provide activities for the children, but contacts between parents which contribute to a sense of community. This is particularly important in areas like Canvey, where community life had to begin from scratch. They also demonstrate the church’s role in society. This was further indicated by the support given in 1970 to a campaign in support of Shelter, the project for the homeless. This was an ecumenical response, which was expressed in a united service at St. Nicholas Church, with a similar one being held at the Roman Catholic Church to which Anglicans and Methodists were invited. Earlier, in 1968 the Anglicans and Methodists held meetings to consider the proposals for unity. The ecumenical spirit has been an encouraging feature of church relations on the island. Within the church fellowship there was a continuing concern to maintain prayer and Bible study meetings in the homes of church members. However in 1972 disappointment was expressed that attendance at these meeting had declined. The membership of the church continued to grow and by 1973 was 60. It was in that year that the Rev. Ian Field succeeded the Rev David Collinson in pastoral charge of Hadleigh and Canvey. Two years earlier David Collinson had become the first minister in a new appointment and Canvey was no longer under the pastoral care of the minister at Benfleet.

In view of the incompleteness of the minutes generally we are fortunate in having those of an important period in the life of the Sunday School. These cover meetings from the 23rd September 1970 to the 27th April 1978. It is appropriate that the first of these minutes were concerned with such basic issues as the syllabus used and the need for adequate training of teachers.

It was recorded that what was described as “the new syllabus”, which presumably was “Partners in Learning”, “had been given a good try, but it was not very agreeable to anyone”. The Scripture Union material was shown to the teachers and considered to be “more Bible based”, and it was agreed that this should be used. The matter of teacher training was brought to the meeting by Mr. John Downer on behalf of the Circuit. He said it was felt that it was important to have a common pattern of qualification for the teachers, and it was agreed to consider this at a later date. When the Sunday School Council met on the 27th January 1971 reference was made to courses at King John School for day and Sunday School teachers on “Religious education in schools”. The statistics for the numbers of children in the Sunday School were reported –
Beginners Department 51 with 15 on trial
Junior Department 32 with 8 on trial
Senior Department 11 with 4 on trial
Y.P. Department 8 with one on trial
A year later the numbers had slightly declined but it was reported that there were 17 teachers including helpers. 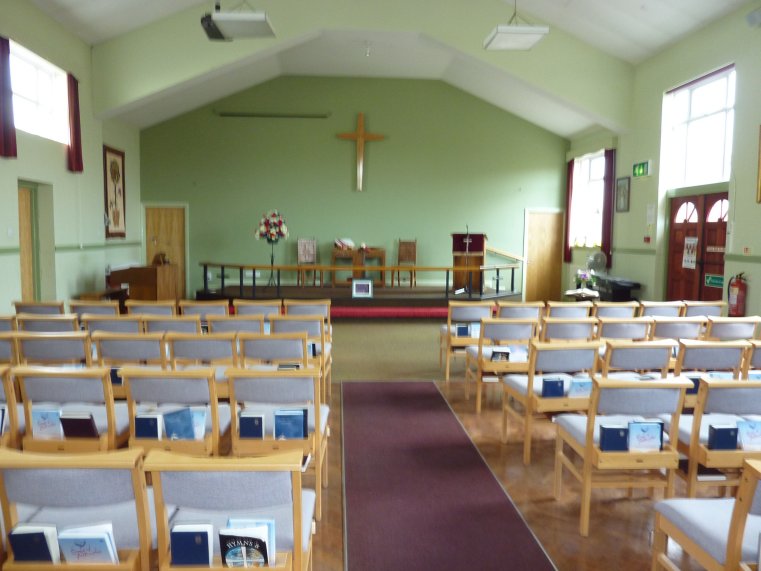 Inside the church. The alter was originally at the opposite end

Teacher training was given a higher profile in 1972. The Rev. David Collinson reported that from the 1st September 1972 all new teachers would be required to go on a probationary period for a year, then possibly be interviewed by an assessor as to the spiritual awareness of the teacher. The aim was to have really committed teachers. In June it was decided to make such an appointment in September, but the minutes of the September meeting did not record one being made. When the Sunday School Council met on the 13th June 1973 it was reported that attendance for teacher training had varied. An encouraging feature over the next year or two was the increases in attendance at monthly Family Services. By 1977 concern began to be expressed about the decline in Sunday School attendance. A decision was taken to distribute letters in the area and this resulted in a few more children coming to Sunday School. The issue of teacher training came up again in 1978 when Stephen Saunders on behalf of the circuit wrote to all Sunday Schools about the new basic training course “Preparation for Service” which was designed for teachers and Youth workers.

From the limited period of minutes of Leaders’ Meetings it is possible to gauge the progress of the life of the church during the 1960s and 1970s. In February 1966 the membership of the church was 51, unchanged from the previous year, but by 1970 it was 47 with the prospect of three young people being received in July. An incentive for growth in the early 1970s may have been the mission conducted by a group of students from Cliff College in 1972. This had been thoroughly prepared and consisted of visitation, “Sunshine Corner” meetings for children, open air meetings and house-groups.

At the annual count in November 1972 the membership was 60 and there was a report that the Youth Fellowship was growing.