I have recently been looking through the Canvey Island Archive website and would like to add some childhood memories for others to enjoy /reminisce. 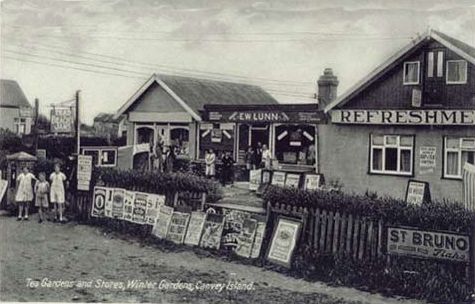 As a very young child, I remember cycling past Lunns stores (the one time entrance to Hester’s fabulous Wintergardens) possibly at the end of Church Parade; I then took a short cut along Wintergardens path to Benfleet to play with friends. I remember that Benfleet High Road from the Anchor pub alongside St Mary’s church roadside wall dipped into a ford passing over the road, Benfleet creek, which used to flow along the back wall of the church, now St Marys close and pass over the road where the bus stop & Postoffice now stand. Just below the now beer-garden of the Anchor pub. The creek continued along the back of bungalows fronting Essex Way towards fields on Reeds farm, at the base of the hill, Essex Way. I have further recollection of a Bullock cart plowing through the creek at low tide coming from Vicarage hill direction towards the cenotaph, in those early days cars were still a novelty in Benfleet & surrounding area. The area where the three storey town houses now stand (St Marys close), was merely bull-rushed creek and saltmarsh with regularly flooding over the playing fields towards Danesfield. and Hopes green. Because the creek was tidal, it effectively cut off the Medieval Benfleet village & station area from the rest of the world every six hours.

Also during my younger days, I remember the annual blush of poppies that invaded the land where the Canvey golf club /rubbish tip now stand. These fields were a dense, jungle of brambles & blackberry bushes; that were nectar for caterpillars of the brown- tailed moth, hence each year Canvey suffered a plague of caterpillars, causing severe irritation and rash to anyone in contact. In those pre- ecology /H.S.E conscious days, the council decided to remove this problem by destroying the bramble jungle with DDT. Unfortunately, this left a decimated empty prairie, soon invaded by the California poppy (launch of Canvey’s early drug industry fortunately this was pre hippy era); the poppies flourished for years until someone realised the unhealthy aspect of this particular plant. Fortunately, leisure was the priority in those days and the ultimate benefit of this early land clearance was a golf club and community sports centre. Happily, in this case the cloud of DDT really did have a silver lining.

I clearly remember as a 5-6yr old exploring the mudflats of Canvey point and discovering the remains of a large aircraft engine on the mud close confluence Benfleet/Leigh Ray approx. 200 yds. from Canvey seawall. The engine was clearly recognisable because of a large propeller that lay skewered upright nearby with numerous parts of engine cowling or aircraft scattered around. As was the custom of the time, there were many coastal sailors’ workbenches in the mud and many had fragments of engine strewn around, early example recycling. I was in seventh heaven, I’d found a great treasure trove and immediately started to forage, regrettably, tide waits for no man. The next day a storm and the next, then new treasure grabbed my attention. It was not until 60 years later, after the cloud of paranoid secrecy lifted I discovered the engine was a relic of war and possibly the site of a war grave therefore not to be disturbed. 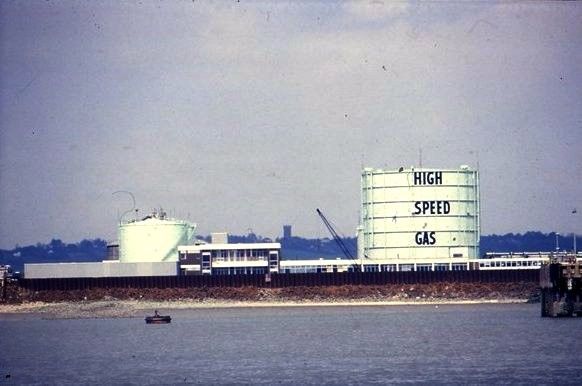 More recent recollection would be familiar to any islander 60yrs or more, however to recent inhabitants is either unknown or disregarded and is now largely confined to the annuals’ of history e.g. The use of the island as the prototype for the entire UK’s conversion to natural gas. This was considered so significant it became part of the history and science curriculums at school and we children were given a day’s holiday when the first Gas tankers’ arrived in the early 1960’s this was no trifling occurrence but was actually the culmination of two or more years planning  and work. Initially, a loading pier was built into the river. Then the Methane plant and storage tanks were built with enormously deep holes dug into the ground capped with huge lids to hold the frozen gas this was a significant first in the liquid gas storage industry, however, it caused great consternation because the gas started to freeze the soil, with possible cracking to the seawall. Phase three the arrival of two giant frozen gas tankers, Methane Princess and Progress the only two of their kind in the world (whatever happened to these tankers?) Finally, the conversion organised as a one-day operation actually took much longer with a few minor mishaps. The conclusion to the project happened when all island households were switched from the old town gas to natural (methane) gas. From that point on, the entire country was totally committed to natural gas.

Not much, you might think, but to those of us present this 1960’s concept & technology was analogous to landing on the moon (A slightly later happening).

Is there anybody else out there in la-la  land that remembers the sea draining out of the estuary in the late 1950’s early 1960’s (plus/ minus five years).This was not the usual tide withdrawal, but a much more significant event. I remember the sea drained from the estuary exposing the bottom of the drop (shipping channel) similar to someone pulling the plug, I with many others closed our jaws and walked out to the Chapman lighthouse that used to stand marking the channel & Chapman sands near Seaview road.

Whilst I’m on a roll is there anybody out there that remembers the Prout brothers using Chapman jetty, Seaview road as the start point for sea trials of their new type of sailing vessel which later to become the shearwater Catamaran. The Prouts singlehandedly contributed more too worldwide inshore leisure sailing than any other family; I remember the joy of carving through the water at 12-15 knots frequently on one hull at a time this was often faster than ‘speed’ boats.

I pose these questions because all these years I have had these memories however as late middle age dawns I need to check ‘I’m not going gaga. If you remember either these phenomenon or know somebody that can.