It tipped over and the nose was looking at me. 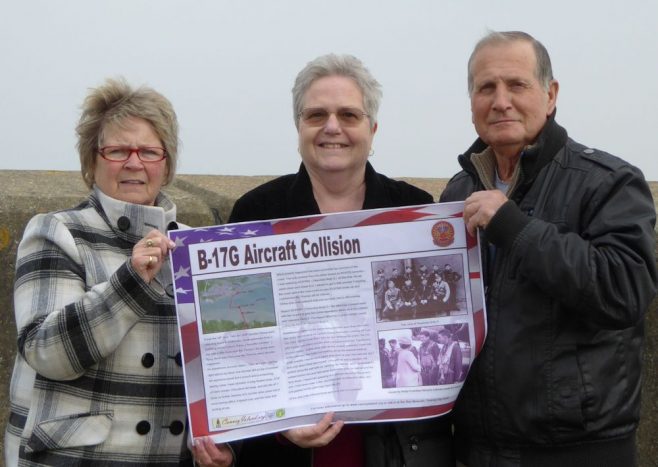 Joan, Janet and Graham with a proof copy of the information board that will be placed at Canvey Point over looking the crash sites.

It was the 19th June 1944 the 379th Bomber Group were returning home to Kimbolton, Huntingdonshire from a bombing raid in France. It was a beautiful summer’s day with a little haze over the Thames, the group were flying North from Kent over the Thames when disaster happened.

An eyewitness account states:- Then as I stood gazing, right above my head, one bomber fell on top of another. No explosive sound but a crunch and a screeching, tearing noise. I was stunned. A wing floated away. A lot of black smoke. One plane fell away, and bits fell off. I have no further memory of it, but the other plane had a more lasting effect. It tipped over, and the nose was looking at me.

The Canvey Community Archive felt that this story should be told and passed on to future generations. The idea came initially from a resident John Pharro who suggested that we have the area at Beveland Road named in memory of the B-17G Flying Fortresses. The Archive wanted to take this one step further and have an information board placed as close to the crash area as possible.

With help from the Bay Museum, Councillor Ray Howard and Castle Point Council we will be erecting the information board as soon as we can, ideally on or around the anniversary date in June. The board will be placed on the land side of the seawall at the bottom of Beveland Road where residents can go and read about these brave men.

We are in contact with the only surviving crewman from either plane, Dick Andrews who is fully endorsing our project.

The Archive has also been supporting the artists who are hoping to do a mural of the event on the seawall closeby, with information from Dick Andrews regarding the colour of the plane and lack of nose art as the plane was very new. Dick as always was very helpful.

Update – We now have board ready to be erected on site and unveiled on the 19th June.