Recuperates on Canvey in 1838 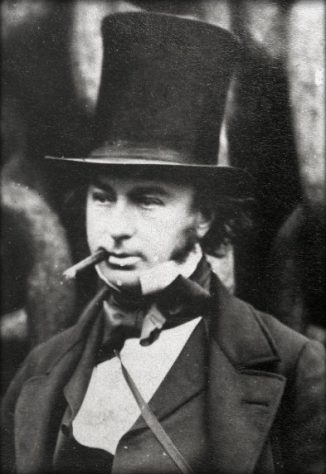 There are many references in books that in 1838 Isambard Kingdom Brunel was seriously hurt in an accident aboard the SS Great Western off Canvey Island and was brought ashore to the island. Whether his stay was brief or a bit longer is in dispute.

Quoting local historian and writer Robert Hallmann…..In 1837 the first of Isambard Kingdom Brunel’s three steamships was launched in Bristol, a paddle steamer built of oak and iron, with a tall funnel and four sail masts for auxiliary power. It was by far the longest ship in the world at the time. (Reports vary from 212 to 236 ft in length.) Engines and boilers were fitted in Lambeth and speed trials carried out on the Thames. On 31 March 1838, while on its way back from London to Bristol, the ship caught fire off Canvey Island and was ‘beached’ on a sandbank to fight the emergency. While trying to help, the great engineer fell some 18-20 ft off a ladder. Seriously hurt, he was taken ashore, apparently to Canvey, where he recuperated for some three weeks.

‘Isambard was taken ashore to Canvey Island where he was put to bed, seriously hurt. Even then he would not let go of his responsibilities and within hours of the incident he was writing directions to Claxton’ (Captain Christopher Claxton, his naval assistant), wrote Adrian Vaughn in his book ‘Isambard Kingdom Brunel – Engineering Knight Errant’ in 1991.

It is likely he was taken to the Lobster Smack Inn but there are no records to confirm this. How long he stayed we do not know, one would suppose until he was well enough to be moved back to London. The railway was not opened at Benfleet until 1855 so he would have had to travel by road or aboard another boat. According to one reference I found in a book he was not at the Board meeting on 17 April,1838 regarding the building of the Bristol & Exeter Railway. His son wrote that his father was ‘landed on Canvey Island, where he remained some weeks,’ whereas G.H. Gibbs recorded having met him at Paddington on 21 April, ‘appearing better than I expected’.

There is no knowledge of this incident in local folklore. We must bear in mind that the island was sparsely occupied with mostly agricultural farms in the early 1800s and as Robert Hallmann pointed out….how many ‘agricultural’ people would have heard of Brunel in his lifetime?