How does a young man, who started race walking to improve his health, get awarded an M.B.E. in later life? Keep reading and you’ll find out. 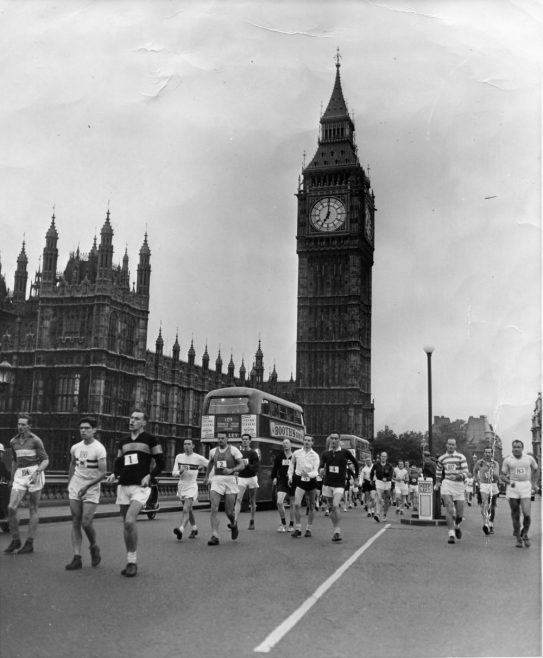 London to Brighton. George, third from left, is wearing the number 1. Number 100 is being worn by Don Thompson

As a youngster George suffered from asthma. When he was eighteen he decided to take up race walking to help improve his health. He’s been doing that and similar activities in a very serious way ever since. As a young man he represented his county of Surrey as well as Great Britain in race walking. In 1957, aged 28, he came third in a Belgian race won by Don Thompson, the only British man to win a gold medal in the 1960 Olympics. The following year he came first in the tough Hastings to Brighton race which is 38.5 miles over the rolling Seven Sisters hills. When he took part in the London to Brighton race in 1951 he came fourth. Since then he has walked fourteen marathons and in 1981 he first took part in the Centurion walks.

The Centurion walks take place in the U.K. Last year (2013) it took place in Brighton. In 2014 it will take place in Southend-on-Sea. To become a member of this exclusive Club you have to have completed the walk which is a’ mere’ 100 miles in 24 hours. The club only has 1,024 members since it was started in 1911 and George is proud to be number 716. It was pointed out at a gala dinner held at the Houses of Parliament that more people have climbed Mount Everest than have earned membership to the Centurion Club.

When George moved to Canvey in 1963 he had been working as a postman at the Mount Pleasant sorting office in London. He was unable to transfer as a postman onto the Island, so he took a job as a telephone engineer with the G.P.O. (General Post Office).  He was obliged, until he could take up that post, to commute to London from March until November. Unfortunately the roads in his area of Canvey were still unmade. This meant that in bad weather a sturdy pair of wellies was a necessary fashion accessory. Although his new job meant that he could work a five day week, it did mean that he had to start at 6 a.m. and finish at 11 p.m. However this didn’t stop him from continuing any of his free-time pursuits.

As he had always been interested in athletics he soon became involved in coaching at Leigh Beck and Furtherwick Park schools and at Waterside Sports Centre. He has now been doing that for 33 years. While working as an endurance coach he helped people ranging in age from 12 to 45 years. He gained a nickname of Beast Master because he worked them so hard. Unfortunately the Waterside athletics track is no longer in use since falling in to disrepair. Now the schools athletics competition has to take place in Basildon and at the time of writing the Island’s Olympic hopeful, Jessica Judd, must travel to Chelmsford to train.

Apart from athletics, George has also been involved in raising money for the R.N.L.I. He has done this for the last 45 years and has arranged entertainment evenings such as Cockney Nights. He also helps with the street collections and is well known amongst local businesses because of his regular arm twisting for prize donations. 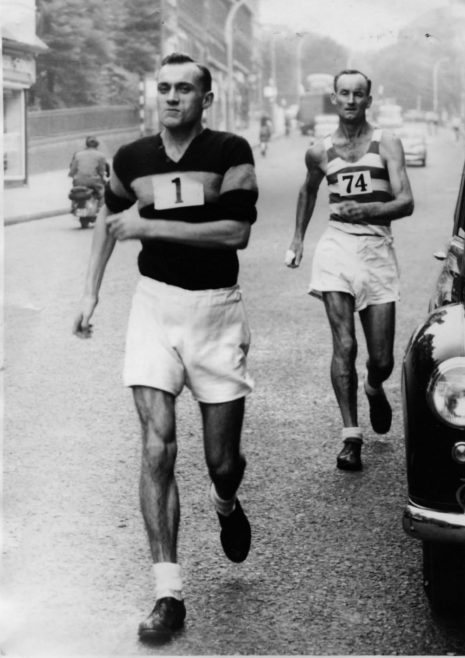 George with Hughie Nielson who still holds the record for the 24 hour walk.

Naturally, walking has been a big part of his life. When he worked for B.T. they would send a team to the Dutch town of Nijmegen to take part in a four day walk. The entire town is devoted to this annual event for a whole week in July. Originally it was called the Nijmegen Marches because a lot of military personnel took part. New sponsors now call it the ‘Walk of the World’; a more apt title because last year 45,000 people from 48 nations took part. The walking isn’t for the faint hearted because they start their gruelling day at 4 a.m. When B.T. no longer sent a team George and his fellow walkers formed their own group ‘The British – Dutch Walking Fellowship’.

More recently he became one of the founder members of the health walks that take place one morning a week along two miles of the Canvey seafront. This group was set up to help people who had suffered heart attacks or strokes and anyone else interested in keeping a healthy heart.

Apparently, it was one of George’s work colleagues from the G.P.O. who put his name forward to be considered for an M.B.E. (Member of the British Empire).

When he received the letter telling him about the nomination he was both surprised and proud. The citation for his M.B.E. is for services to Canvey Island. The medal ceremony took place on 13th February 2008 at Buckingham Palace. As the Queen presented George with his medal she asked him what he’d done to earn it. Amongst other things George mentioned the marathons he’d run and that he was always very glad to see the Palace. The Queen smiled at this because of course seeing the Palace meant that the marathon’s finish line in the Mall wouldn’t be far off. George was very impressed by the way the proceedings were run with such military precision. He was also lucky to rub shoulders with well-known personalities such as the sports commentator Des Lynam. A celebratory dinner in a London restaurant in the company of his wife and children rounded off a very special day for him.

At the time of writing he is still actively involved with walking because he co-ordinates the Walking Group for the Canvey U3A which has been in existence for the last three years. He hopes to continue to do this for the foreseeable future.