You are here: HomenextArtsnextLiteraturenextPapersnextNational Newspaper CuttingsnextHarry Rows them to Safety

Harry Rows them to Safety 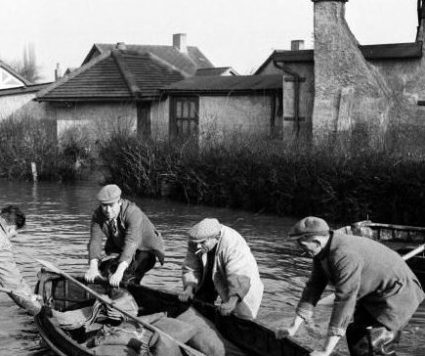 It was a one-man Dunkirk for old soldier 61-year-old Harry Lake yesterday. His effort in a tiny canvas boat saved nearly a dozen people from drowning on devastated Canvey Island, Essex.

As the flood waters rose fitter’s mate Harry, who had never been in a boat before, rowed to rescue frantic people from their homes.

Last night I found weary Harry slipping from the disaster area on the last bus to Southend.

Collarless and with his old brown cap askew on his fur­rowed forehead, this old soldier (ex-Essex Regiment) told me: “When I saw the water all round and heard people shout­ing I thought I had better do something quickly. I got the boat from a yard nearby. Whenever I heard anyone calling for help I rowed to them. I have never rowed before, so I fell in once when the boat capsized. Another time I lost an oar. I took a woman of 70 and her 40-year-old daughter out first.”

Mr. Lake took the rescued people to his bungalow, on high ground untouched by the flood.

There his wife gave them tea, and dried their clothes.