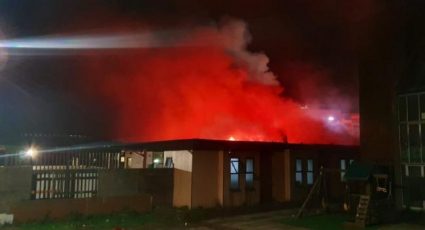 As all of you know there was a fire at the Jewish Centre at Meppel Avenue on Saturday.

We are pleased to report no one was injured and just a single story block at the back was destroyed. The block was used as a Jewish school and the community are now looking for a new centre for 50 boys who regularly attend.

Report from the fire brigade states:

Crews were called to reports of a fire in faith centre building this evening.

On arrival firefighters reported that there was a well-established fire within the building, which is primarily used as an educational faith centre.

Firefighters worked quickly to surround the fire and bring it under control, both on ground level and from above, using an aerial ladder platform.

By 11.15pm the Incident Commander reported that the fire was extinguished and crews were checking the scene for any final remaining hotspots.

Firefighters were also working with the Jewish Community to safely salvage items from the building.

An update from them states:

Following an investigation firefighters have confirmed the cause of the fire has been recorded as accidental and was started by candles that had been left unattended.

Joel Friedman, who gave us permission to use the photos said on Facebook, where he also thanked the Emergency Services and the local people:

We are touched by all the good wishes received and even more so by the many offers of assistance from the local neighbours and friends in the area and of those passing by. Canvey truly is an amazing place – where people come together in their time of need.

We are very pleased to add our Jewish community to our Canvey Archive website and would like to wish them a Happy Hanukkah.