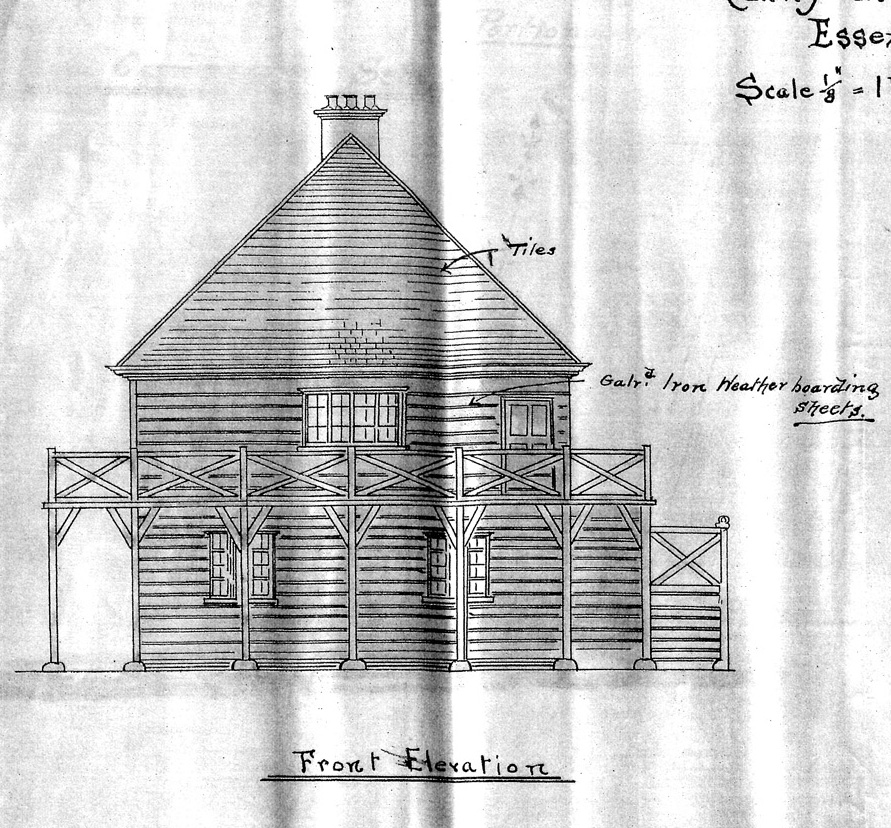 Front elevation of the plan dated 1907

I have recently found a copy of the plans for a building on the corner of Hellendorn Road and The Promenade (Eastern Esplanade) dated 1907. The plans are of St Hughs a building quite prominent on the seafront and later known by many on Canvey Island as the Riverside Café.

The building was commissioned by a member of the Seabrooke Family, Charles Herbert Seabrooke, who was a Director of the family’s brewery in Grays which was founded in the early 1800s by Charles’ great grandfather, Thomas Seabrooke. Both the Lobster Smack and the Red Cow on Canvey Island were Seabrooke Houses.

From the pictures I had seen of the building it looked like a typical timber building so I was surprised when I looked at the plans. Although it has a timber frame the walls were in fact Galvanised Iron weather boarding sheeting. The upstairs over-hung the lower floor not only with the veranda but also the floor space upstairs was much bigger than below. It was built as two flats, the lower smaller one for the ‘caretaker’ with a kitchen and bedrooms. The upper floor, which had a separate entry from the stairs outside was for the ‘owner’ with a lounge and two bedrooms. Also on the ground floor but outside the ‘caretakers’ flat were four soft water tubs collecting rain water. (More of the plan can be seen in the gallery below) 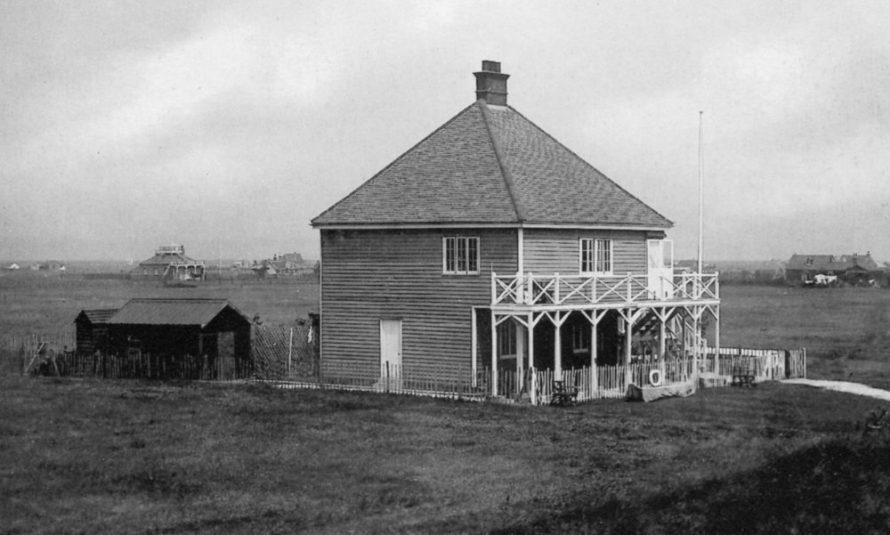 Charles lived there until at least 1911 where he can be found with a visitor, Bernard Halls, a housekeeper, Eliza Hitchcock and the housekeeper’s husband, Frederick.

His father died in 1913 which is when he probably moved back to Grays as he can be found in Grays in the 1914 Kellys Directory. By 1914 Charles, like many others, had joined the 3rd (City of London) Volunteer Rifle Corps. A notice in the London Gazette dated 13 October 1914, Captain Charles Herbert Seabrooke of the Army Service Corps, was to be made Major. He married in 1915 to Laura moving to Upminster. As well as being a Director of Seabrooke Brewery and a Major during WWI he went on to be an Essex County Councillor for Grays. Charles died in 1940 in Whitechurch, Oxfordshire. 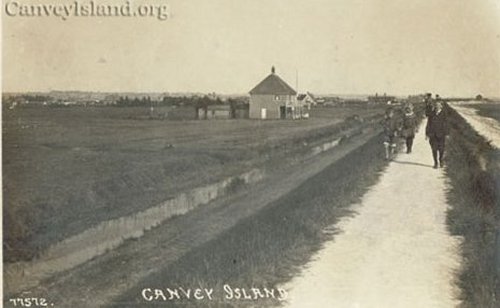 St Hughs from the seawall. As can be seen there was little development along the Promonade at the time the bungalow was built.

By 1918 Edgar Horatio White, a weighting machine proprietor, was registered as being the owner although his main residence was in Forest Gate, London. The family probably used the bungalow as a holiday home.

Edgar was still there with his wife, Annie, in the 1929 Electoral Register as were John Foden Herbert and his wife Ivy. Perhaps the later were the caretakers whilst the White family were in London. Edgar died in Forest Gate in 1938 which may be the time the place changed hands again. If anyone knows please comment below. 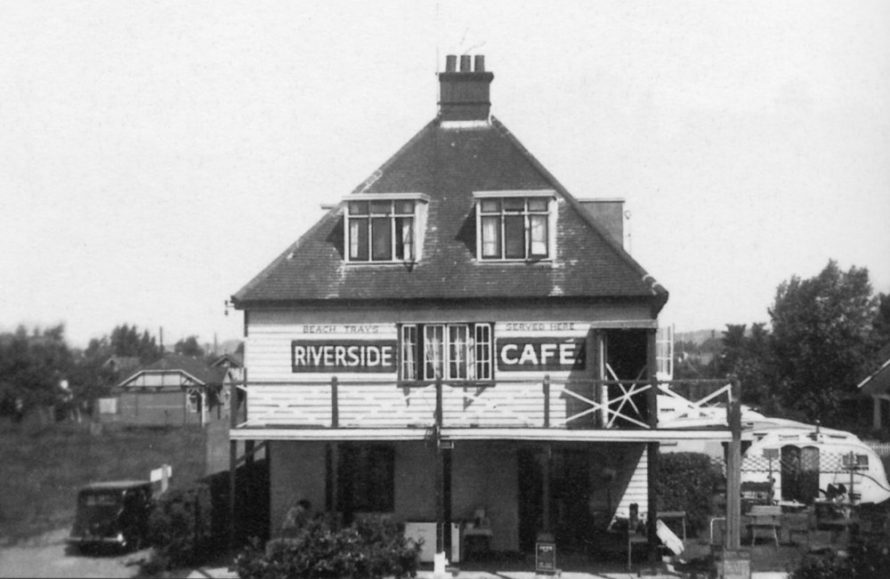 Riverside Cafe. Dormer windows have been added to the roof and the outer stairs have been removed.

At some point the building was taken over by the Lacy family who turned it into the Riverside Café. The downstairs was the cafe, the upper floor was turned into a separate flat with its entrance door downstairs opening onto Hellendorn Road. Dormer windows were added to the roof to make another level. The stairway leading to the veranda was also removed.

Later still Fred McCave used a room in the cafe and ran his business from there. When the Lacy family retired Fred took on the building and it became his base for his bulletin magazines, printing business and his museum of Canvey artifacts. The building was pulled down in the late 1980’s/early 1990’s.

If you have memories of the cafe or can add anything re the history or people please comment below. 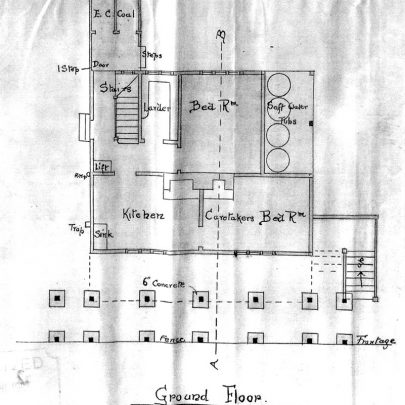 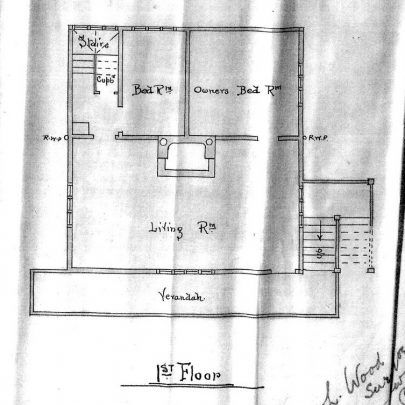 Plan of the main residence upstairs 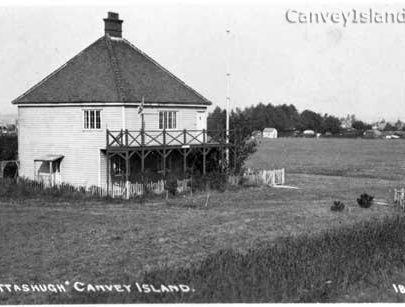 A later postcard of the bungalow. 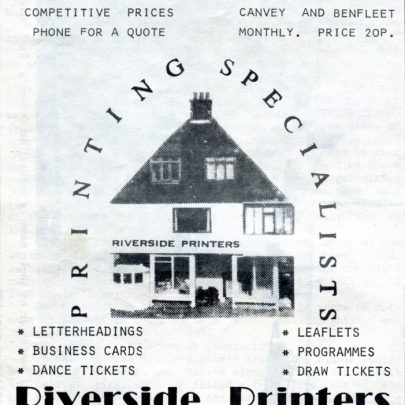