History of the Lobster Smack and Sluice Farm

When Richard and Barbara Kovelant sent their salvaged and rejuvenated Canvey and South Benfleet photos of 1895 from their home in Annapolis, Maryland, USA, there were some puzzling descriptions to some of the photos, like Beckwiths for the Lobster Smack and Beckwith’s Farm. 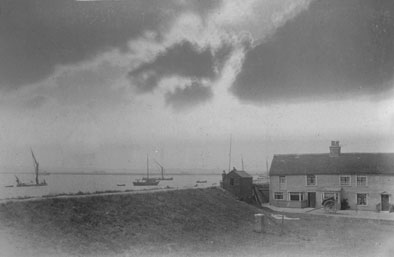 I for one had never heard of such a place and presumed it had to be at Leigh Beck. Until, that is, we looked up the annual Census data. In 1881 Charles Beckwith was ‘Licenced Victualler’ of the Lobster Smack, but he was also listed as farmer of 142 acres, employing four men and one boy.

His wife Lucy hailed from Vange. Charles was born at Banbury in 1838. Children were Alice (8), Ellen (6), Charles (5), Lucy (4) and Edith aged one. All the children were born on Canvey. Charles’s sister-in-law Elizabeth Cutts (21) was staying with them. One of the Benfleet Brewitts, Emily, was a 15-year-old domestic servant. Two ‘Watermen’ were staying as boarders, James Thornton aged 50 and his son, also James, aged 17. 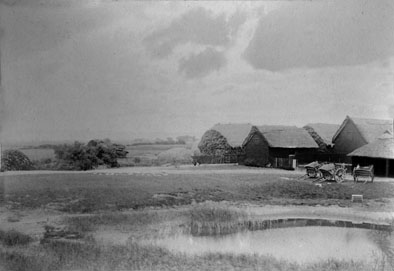 Beckwiths’ Farm House (Sluize Farm) has gone, though the site can still be seen from the sea wall.

Sluice Farm House, alias Beckwith’s Farm, was occupied by George & Rosetta (or Rosella) Farrow, both aged 30, with their four children William (7), Rosetta (or Rosella) (5), Alice (3) and Edith (1), Charles Edwin Farrow, a 15-year-old brother-in-law and a 21-year-old lodger, Benjamin Paderna (? unclear spelling). All the men were agricultural labourers, but there was also Charlotte Palmer, a 64-year-old lodger and charwoman, who in the isolation of her abode probably walked across to the Smack for her employment. 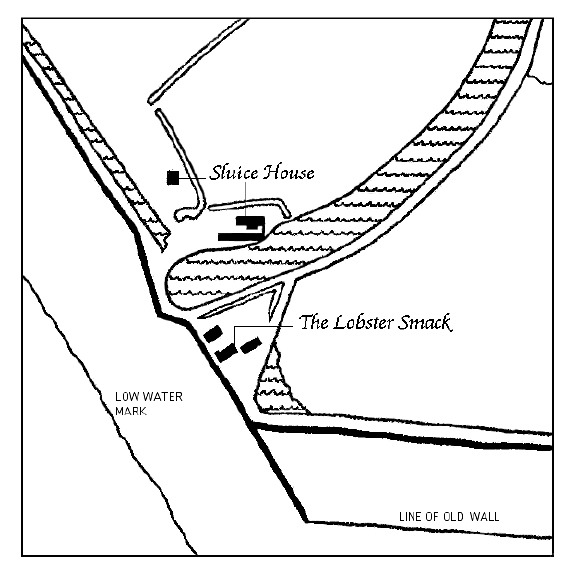 The layout of the area from my book ‘Canvey Island – A History’, based on the South Benfleet tithe map of 1841. At the bottom it shows the line of the original sea wall.

Twenty years later, by 1901, the 63-year-old Charles Beckwith was a widower, but still a ‘Publican’. His son Charles, now 25, was an assistant barman and his two daughters, Edith (21) and Lizzie (19) also helped out.

There was a servant called William Vine, aged 44. All but Charles senior were born on Canvey. Occupants of Sluice Farm in 1901 were the Murray family, consisting of 63-year-old William, his wife Sophia (67) and their ten-year-old grandson Francis W. Hammond. They, too, had a boarder on the farm. The former creek that became a sluice with the building of the seawall became a pond between the Lobster Smack (formerly The World’s End) and ‘Sluice House/Farm’.

The house has gone, but there is still activity where the barns and stables used to be and the creek/pond is dry, a now green snake that winds between the two properties, turning west… In the photo of the farm, the farm house would be further to the left and out of view, but the many barns sprang a surprise when one studied the enlarged picture. The farthest two are actually haystacks. (Research thanks to Karen Bowman)

I have added three Photos of Beckwith Tombstones from St Katherines Church in the Gallery below. I hope they may be of interest to any members of the family and researchers alike. Click images to read. 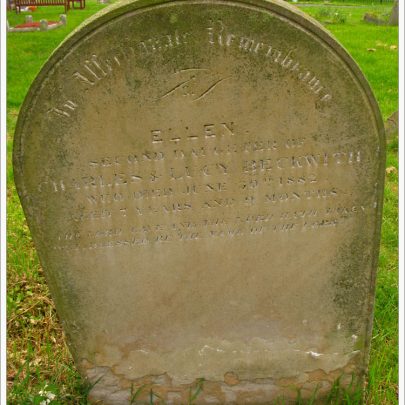 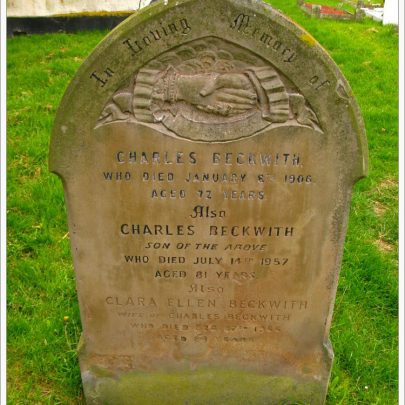 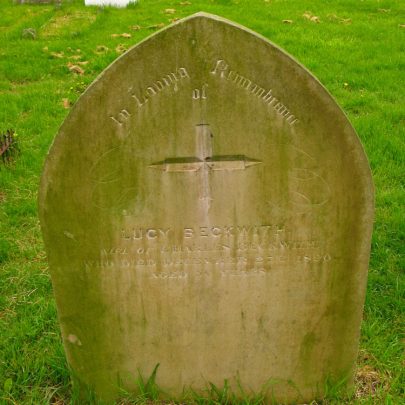