Vermuyden and the Fens

A Study of Sir Cornelius Vermuyden and the Great Level 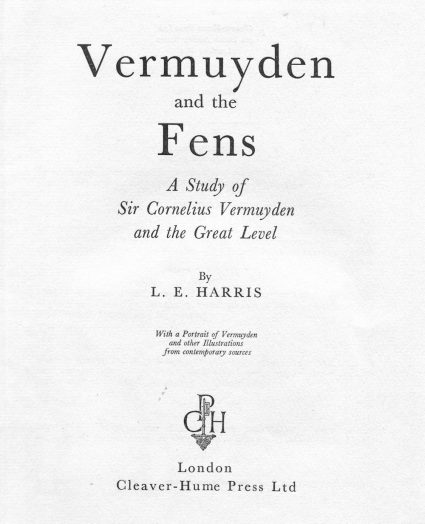 Before Cornelius was born you could say his destiny was already being written. A quote from the book states:
In the year 1585 an Act had been introduced into the Commons entitled ‘An Act for the recovery and inning of drowned and surrounded grounds and the draining dry of watery marshes, fens, bogs, moors and other grounds of like nature’. This Act, as its title implies, was not confined to the Fenland itself but was intended to embrace all ‘drowned and surrounded grounds’ throughout the kingdom. Sixteen years were to pass before, in 1600, it reached the Statute Book but the intentions expressed in the Act give a clear indication of the attitude of the Crown to the whole subject of land reclamation.

It was not until 1590 that Cornelius was born to Gillis and Sara Vermuyden. Gillis was ‘a prosperous and respected citizen of the town of St. Maartensdijk, in the isle of Tholen, of the Province of Zeeland.’

Harris goes on to speculate about Cornelius’ life into the early 17th century:
But at the time of which we are now writing, the year 1611, Cornelius Vermuyden was a young man of twenty-one years living, presumably, in St. Maartensdijk, and occupied, perhaps, with the affairs of land reclamation in his native province of Zeeland. That must be mere presumption because there is no record of his activities in his early years. Indeed, in the Netherlands today Cornelius Vermuyden is known for what he did in England, and for that alone.

So when did Vermuyden come to England? What brought him here and how did he come to be involved in the reclamation of land on Canvey Island?

According to Harris the first steps were taken in 1618, when Joachim Liens who was closely connected to the Vermuyden family arrived in England followed it is believed in 1621 by Cornelius Vermuyden. It is thought at the invitation of James I. The main job on the horizon seems to have been the Great Level but it was many years before this came to fruition.

During the intervening years Vermuyden Harris says: ‘now that he had come to England, to find something to do. It is quite clear that the restless energy of the man, to be demonstrated so clearly in his later years, would not permit him to wait idly in England while the seemingly interminable discussions on the Great Level went on and on. Some time soon after his arrival in 1621 Vermuyden was engaged by the Commissioners of Sewers for the County of Essex for the repairs to the breach in the banks of the Thames at Dagenham and in all probability the Commissioners made the appointment on the prompting of James himself. Admittedly that is largely a matter of surmise but, as later events were to show, Court influence was something which was often exercised in the interests of Vermuyden, particularly in the subse­quent reign of Charles I.’

In 1622 Vermuyden’s name appears in connection with Canvey Island along with Joas Croppenburgh and of Joos (Joas) Croppenburgh Harris writes:
On 16th June, 1622, Joos Croppen­burgh signed an indenture under the terms of which he was ‘at his own costs to Inne or cause to be Inned’, all the lands, except 14 acres, in ‘Erith co. Kent called the great breach containing 492 acres which have been for years subject to flooding by the Thames’.1 This indenture is quoted in a Chancery Suit of 5th November, 1626, filed by one William Finch and Jona­than Brett against Vermuyden and Croppenburgh. The subject of the suit is not of importance, but its importance lies in the fact that the plea states that ‘Cornelius Vermuyden of London, gent, assisted [Croppenburgh]’. Incidentally, Croppenburgh, on 9th April, 1622, had entered into a contract with Sir Henry Appleton for the embanking and reclaiming of flooded lands in Canvey Island in the lower reaches of the Thames. Vermuyden’s associa­tion with Croppenburgh was understandable because, apart from the fact of their being both Netherlanders, Croppenburgh had married as his second wife, after the death of Catherine, Mary Vermuyden, a daughter of Johan Vermuyden, son of Cornelius Vermuyden’s elder brother Bartholomew. It has sometimes been suggested that Vermuyden’s introduction to King James came through the agency of Joos Croppenburgh. Certainly their associa­tion was by the nature of things close, but it is considered that the conclusion that the source of this introduction was Joachim Liens is the more reason­able.

It was during this period in 1623 that Vermuyden married Katherine Lapps, daughter of All-saints Lapps Merchant of London. Of the Lapps (Laps) family Harris writes:
It has hitherto in the past been assumed that the Laps family were of English descent, but more recent evidence tends to disprove this assump­tion. It is shown in the archives of the Dutch Reformed Church of Austin Friars that on 1st January, 1594, a certain Toussain Lap of Bruges (later described as Laps) married Catherine Houwe of Cassel and that this Cath­erine on 13th September, 1614, married as her third husband Joos Croppenburgh. From this it appears to be clear that the Laps family were natives of the Netherlands, while the mention of Joos Croppenburgh brings in a further connection with the Vermuyden family. (We are assuming this is the same Joas Croppenburgh.)

So Canvey and the other small jobs along the Thames were ‘fill ins’ whilst he waited for the big job of the Great Levels. Perhaps he used these smaller jobs to practise his ideas before going onto bigger and better things. Nothing is mentioned as to whether or not he ever set foot on the island.

Vermuyden went on to have thirteen children and he was Knighted by Charles I, in 1629. He died on the 11th October 1677 although other dates have been shown on records. Harris states:
The true facts are given by the children Bartholomew and Sarah. Bar­tholomew in his answer to Lediard’s suit says that the Dovegang mine descended to Cornelius ‘ on the death of this Defendant’s father Sir Cornelius Vermuyden, who was seised of same and died about 16 years ago’. Sarah’s statement is that Sir Cornelius ‘died so seised . . . about 16 or 17 years since’. Again the date of both these statements is 1694 which makes the date of the death of Sir Cornelius about 1677-78, and it would be fair to assume that the children knew the date of their father’s death.

And so in the end was found in the register of the church of St. Margaret, Westminster, the record of the burial of’Sr. CorneP Vermooden’ on 15th October, 1677, and that simple entry, which has taken so many years to trace, gives us conclusively the last record of that remarkable man. By 1677 he had reached the age of eighty-seven, and presumably, he died in the ‘great House in Channel Row, Westminster’, close to the church of St. Margaret.

It is unlikely we will ever know if the man himself ever set foot on the island and it would seem we were just a small part of his work in England whilst he waited to move on to bigger challenges. But Harris has definitely given us an insight into Vermuyden’s connections to us and to Joas Croppenburgh.