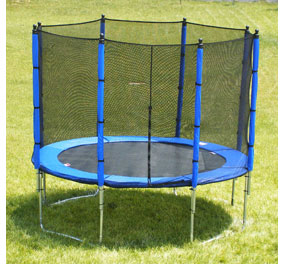 On March 18th 2005, my family and I moved to Canvey Island from Walthamstow, northeast London. During the summer of the same year, we bought a 12ft frame pool with an airbed. After a couple days, I thought of an ambition to try to surf on an airbed and long jump, but I fell off and broke it accidently. Nine months later, got a brand new trampoline which is around 10ft circumference.