We are now settled down in our new council house, and there was so much to do on the estate for all the kids that lived there, as the estate was one big building site, so after school and at weekends it became our play ground. 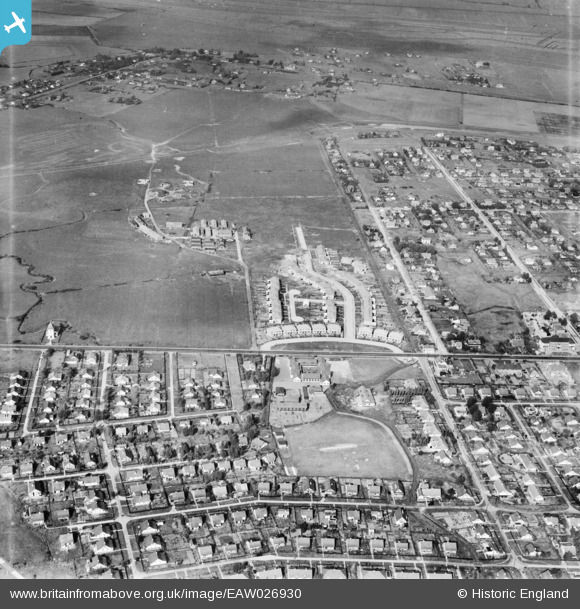 There seemed to be more sand there than down at Thorney Bay! (which was a lovely big beach back then), so it was great for building sand castles and tunnels, there were so many bricks for us to play with, also scaffold planks that we turned into see-saws and slides, just perfect, what a place to live!! Believe it or not, with all this playing going on nobody did any damage, and the builder didn’t seem to mind, but we didn’t play inside the new homes that were being built, I think that was because our parents threatened us with our lives if we did!! Plus we all had so much respect in them days for just about everything and everybody.

Then there was P.C. Farmer who would keep a eye on us, I think he was the only policeman on Canvey at that time, he was a very large man and would ride around on a push bike that seemed too small for him, (more often than not he would push his bike). There weren’t too many street lights on Long Road, I think there were four, one at the Red Cow  (now the King Canute), one at the War Memorial (now Tremains on the corner of Craven Avenue), one on the Corner of Fairlop Avenue, the last one was on the Corner at the Haystack, so you could see him coming down the Long Road at night as the light on the front of his bike seemed to be going from side to side, ( like Jimmy Edwards in the film “The Plank ” if you have seen this film you could also relate to the building site we played on). He had gained a lot of respect from most of the small community of Canvey as he was our local copper and very fair. The main police station was at Benfleet, they had a police car with a big bell on the front and only came to Canvey when needed, the only time I heard the bell ring was when it led the Canvey Carnival, which was over two miles long at times, it was a big event and so many people would take part. It would  finish at the Canvey FC ground, then The Paddocks (1066 and the War Memorial now stand on that land), there was always a big fair held there for carnival week, all the kids looked forward to it, as it was  one of the biggest events of the year. P.C.Farmer seemed to know every kid’s Dad and where you lived,!!!!  If you were caught getting into mischief, he would say “I’ll be round to see your father about you” but he never asked us where we lived!! If the big kids gave him any cheek he would give them a clip around the ear and tell them he was going to put  their names in his book  and that meant big trouble!

Canvey was a good place to live, there weren’t too many problems as far as the law went, most people would leave their doors unlocked, if you had a bike you could leave it anywhere and know it would still be there when you got back. I think the biggest problems for the police was in the summer months when the holiday makers and day visitors came to Canvey in their hundreds, mainly for the beaches to picnic on the grass seawall, and  the Casino amusement park, (the seawall had no concrete or steel in those days, part of the old seawall still stands near the roundabout at Rainbow and Mornington Rd, it has been left as part of Canvey’s history).

Trying to get off the Island could take many hours, if the tide was in the bridge at Benfleet would open to let the boats through, also when the steam trains were coming to Benfleet station the level crossing gates would close, bearing in mind this was the only way off the Island, at times the cars and buses would get stuck in traffic jams as far back as the old council office on Long Rd. (it is now the medical centre.) Back in the 40s and 50s there was also special constables that would help the police out, they were part time policemen, I don’t think they had as much power as the police, they mainly dealt with traffic.

I remember looking out of my bedroom window and seeing the farmer’s fields as far as the Village, also I could see St Kathryn’s church, on a still day you could hear the bell ringing from the church on Sundays and for weddings. I could also see the old army camp and the gun sites, which were at the bottom of the old camp road that lead off Long Rd, it used to run alongside Thameside Crescent and up the side of what is now St Nicholas church going north. By the late 40s the army had left the camp and disarmed the gun sites but had left the Nissan huts which was used for temporary housing, and the gun sites  as a play ground  for us kids!! (if only our Mums and Dads knew).

Down the Camp Rd farmer Cook had a big cow and hay shed, in which he would put the cows in at night through the winter months and half fill it with hay in the summer, the farm house and milking sheds across the lake at the bottom of Denham Rd, you could get to it by crossing a bridge and climbing a wooden stile, this was at the narrow part of the lake, it also lead to Lakeside path if you were walking to Benfleet. When we moved into 54 North Av. we had a picket fence at the back of the house but not in the front, I remember helping my Dad to get turf from the cow field by the hay shed on the Camp Rd in a wheelbarrow, we laid it down in the front garden it looked great when it was finished, until Cook’s cows got out and eat it all as it was lush green, that’s when my Dad decided to plant a privet fence out the front that seemed to grow over night.

I loved living there as it meant no more catching the red bus with the wooden seats to school. I went to Long Rd Primary and my mum would put my sister and I on the bus at the bus stop outside Fitt’s sweet shop (the row of shops by Canvey Supply in the High St) and meet us at the bus stop outside Chambers grocery store on the corner of Chamberlain Avenue when we came home from school. Chambers also had a shop alongside the farm house in Furtherwick Rd (where the job centre now stands), this used to be a wooded area that backed onto the paddocks and down as far as the Parkway, good for playing cowboys and Indians when you came out of the Rio Cinema on a Saturday morning. (Hoppalong Cassidy was my favourite)

Well back to school I don’t think things have changed much as far as kids go, there wasn’t too many that liked going and I was one of them. I did like the small bottle of free milk we got every morning at playtime, some of  the teachers were’t too bad. My first teacher was a Miss Skinner then Mr. Giddion, my last before going up to William Reed was Mr. Pethick, our head master was Mr. Benson – to me they seemed all over 100 years old at the time!! Then there was the school nurse that visited now and then to see if all the milk they were giving us was working on our teeth and making them nice and strong, and also checking our hair for nits, back then most of the boys were called Brylcream kids as our mums would plaster it on before we went to school so it stayed nice all day, not forgetting the parting down one side we all seemed to have, and when the nurse had finished it was sticking up all over the place, we all looked like Ken DODD!! our Mums could always tell when the nurse had been!

It would take us about 10 minutes to walk to school but longer to walk home, we had to pass White’s farm which was opposite the primary school. It was a big farm with lots of sheds that were thatched, and a big farm house with a pond to one side, which always seemed to have ducks on it, he had horses that were used to pull the big hay carts and cows for milking also there were chickens every where. There were the dykes that ran both sides of the Long Rd that had a 3 inch pipes about 3 foot high from the path held up by a wooden post that the pipe would pass through, they were there to stop you falling in when the dykes were full of rain water, they would freeze over when it was cold enough and would stay frozen for days. Just so much to do and see on the way home from school.