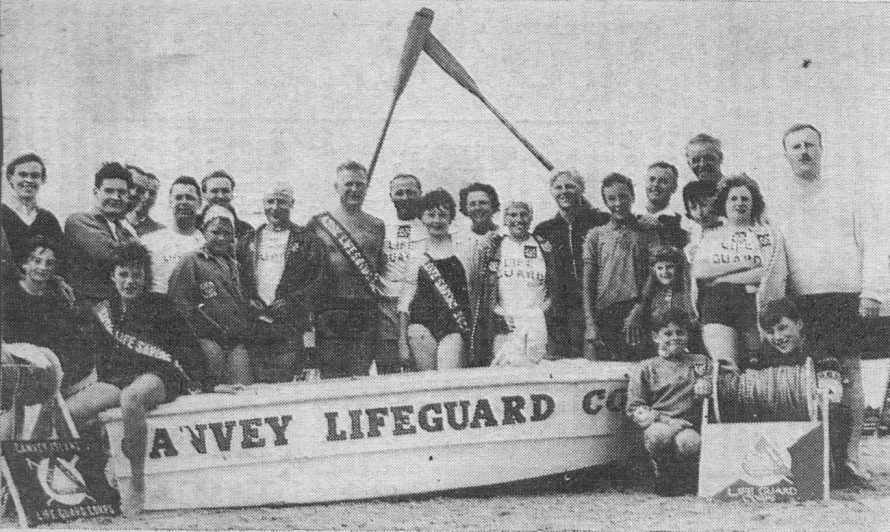 The team of life-savers –from Essex and London–which demonstrated rescue and artifitial respiration techneques to Bank Holiday crowds. September 1966

Hundreds of Bank Holiday bathers were given their first instruction in life saving and artificial respiration on Monday when Canvey Lifeguard Corps staged their first large-scale demonstration at Concord Beach. The event was held to mark the 75th anniversary of the Royal Life Saving Society and the full programme of rescues “survival, swimming and kiss of life” demonstrations went through despite a choppy sea and frequent rainstorms. Directing the rescuers through a public address system was the “leading light” of Canvey Lifeguard Corps Mr. Charles Cary. He was helped by nearly 50 part-time Life Guards from his own organisation and from the East London School of Swimming, Chelmsford Life Saving Club, and Thurrock Life Saving club. The programme was to have included an air-sea rescue demonstration – seen in stark realism off Canvey’s shore – by an R.A.F. helicopter, and a display by the Royal National Lifeboat Institute. But both events were cancelled because of the Bank Holiday weekend which some swimmers and sailors could have threatened to “liven up” for professional rescuers.

Although the sight of a seaside hero risking his or her life for a swimmer in difficulties is not a new one, the methods used to help the rescuer have become more revolutionary every year. Latest addition to Canvey Lifeguards’ patrol fleet is an Austrian black rubber dinghy, complete with outboard motor. It can hold eight people – which is quite a feat when it measures only about six feet in length – and is extremely difficult to capsize. Made of extra-tough rubber it is collapsible and therefore easily transportable.

The holiday-maker who eats too much ice cream or has a substantial meal immediately before going for a dip is often hauled from the water by a reel and -line rescue team. The reel consists of a large hand-operated drum while the line is usually made up of several hundred yards of rope. But the line used by Canvey Lifeguards on Monday was “on test”. Made of plated nylon it can withstand a much greater strain -than ordinary fibres – but sometimes inflicts a burn on the rescuer’s hand. When brought ashore the “subject” is revived by the “kiss of life” administered by one of the six people needed to haul him in. This method – strictly for those trained in rescue techniques – was followed by a demonstration of how too many people in a small boat do not get very far. Monday’s wind was blowing hard in the face of a light weight dinghy which got only a few yards before it was pushed under the waves and its crew of six thrown over-board. They were rescued by a team of Lifeguards making headway under their own power. 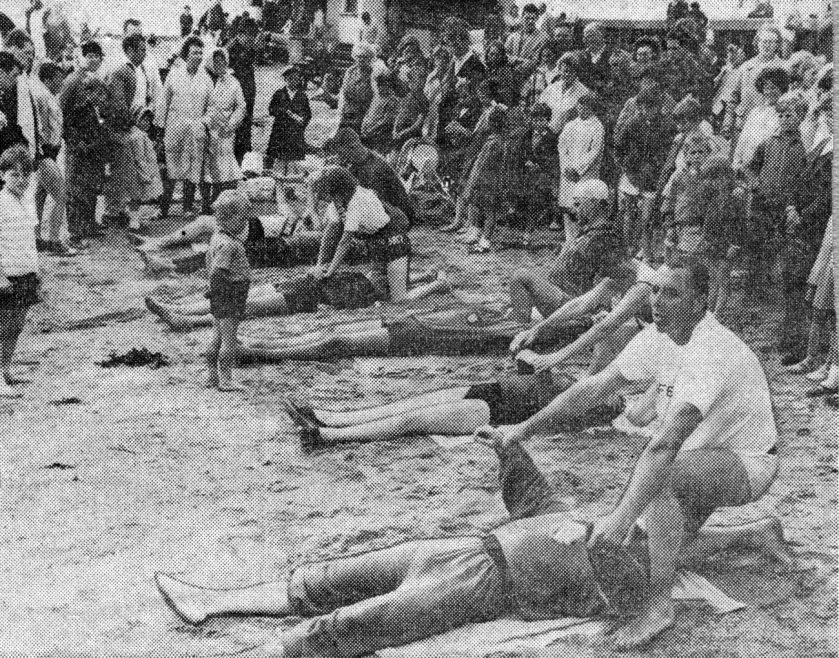 The heavy shower which followed was not on the programme and although it drove the enthusiastic audience from the open sea wall it did not succeed in keeping them at bay. They were soon back in force to watch three different methods of artificial respiration. A “straight” demonstration of the Holger Nielson method was adapted to cope with an injured swimmer and was followed by the very successful “kiss of life” technique. Mr. Cary was satisfied with the day’s results “We had a large audience and many of them asked questions about artificial respiration,” he said afterwards. “Most of the methods we used were strictly for the experienced but artificial respiration can be picked up without too much difficulty.”There is nothing worse than standing around helpless with someone literally breathless at your feet. We hope our display will help to reduce the toll” (three a day) of bathers drowned round the English shores.

The demonstrations became an annual affair, more pictures can be seen below. 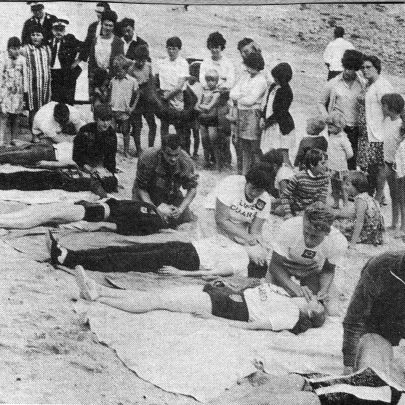 The Kiss of Life: this demonstration of the well-known life-saving technique was at Canvey Lifeguards' aqua show 1967 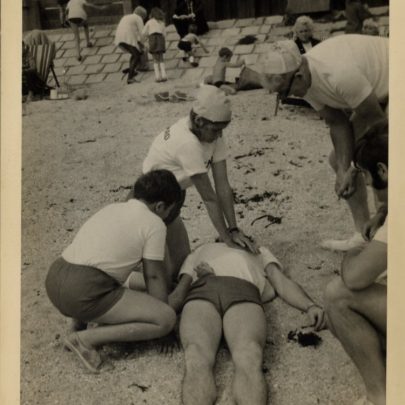