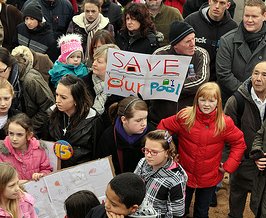 An extra ordinary meeting was held at the Paddocks by the Town Council on February 9th 2010. We have tried to make things as clear as possible. We apologise if we have made any mistakes or left anything of importance out. Please feel free to comment below.

The meeting was packed with all seats full and no standing room left, the car park held approximately 50+ people trying to get in. It was decided to go ahead with the meeting to avoid any delay which could result in being too late to ‘Saving the Pool’.

Nick Harvey chaired the meeting with nine members of the Town Council in attendance.

The Town Council stated it had arranged this meeting to discuss the closure of the pool and were keen to hold discussions with CPBC on matters that concerned the people of Canvey. They do not have all facts in, what has to be decided is whether we want or can have formal discussions with CPBC to try to keep the pool open, there are Health and Safety concerns and ongoing costs.

The public question time usually being 10 minutes was extended to 30 minutes due to the seriousness of the issue.

The following points and questions were put forward and answered by various people.

Liz Swan. Is it right that the Town Council knew about the pool being removed at Christmas time and have not done anything about it? Nick Harvey confirmed that the Town Council had only found out about the pool days before. Liz then stated that Pam Challis says 2.5 million is being spent on Leisure at Waterside and Runnymeade and the Paddocks these facilities families have to pay for and normally stay for an hour or so. The beach and pool on Canvey is free, while people are there on the beach they need to be safe, so for children to be contained in a pool will keep them safe All Day.

Colin Letchmore stated that he, being disabled was one of the few people that use the ‘new’ pool. He uses it as no-one else does because of his disabilities. He used it today, the base is concrete, covered in slim and he fell over. The edge is very dangerous if any pool should be closed it should be this one. Children use the old pool where there are lots of room for the people to see their children and there is a wide flat wall around the edge to walk on which is safe.

Dave Cain. Shouldn’t have dogs on the beach! Put signs up ‘ Swim at own risk’ health and safety have gone well overboard. The people of Canvey are sick and tired of CPBC ruling our island, the pool should stay.

Public: Pool has never had credit for bringing people onto the island buying ice cream, candy floss, cups of tea, fish and chips and using the amusements. If you want sustained employment keep the pool.

Public. How was this vote to remove the pool done was it democratic? Nick Harvey: The Cabinet at Canvey Borough Council made decision.

There was some confusion in the meeting regarding which Council had made the decision. Nick Harvey made it very clear that it was the Borough Council not the Town Council and that they the Town Council are trying to get this overturned.

Gary Foulger, Canvey Coastguards team went on to voice his concerns: “the pool is a catchment area for children. Please take into consideration the cost of recovering casualties, Lifeboat, Police, Ambulance Service, Insurance costs, Hospital, Families and next of kin- we get a few jobs a year”. Gary pointed out that if you take away the pool children will go looking for water- and with the ‘Container’ development coming, they start dredging soon so the water will get deeper the ships get bigger, the bigger the wash. He clearly stated “Take the facility away could cost people’s lives.”

A member of the public asked if the status quo will exist while this is going on or will they just knock it down. Nick Harvey: “We have made a decision tonight that we are going to fight this as a council to get it stopped. So nothing should happen while this is happening.” This was later confirmed when Rebecca Harris prospective Conservative Candidate arrived.  She stated “. I have absolute Caste Iron Assurance from Borough council that they would not do anything pre-emptive to decommission the pool. So there is a window, a very important window where the Town Council and anyone that cares has time and energy on their hands can look into the basis of this decision”.

Someone new to Canvey made a very good point “I have seen the new pool it is a concrete base with sludge in it. What about the wildlife in it? There is not any in it. In the pool that is to be destroyed it has crabs and fish in it which oxygenate the water, children love to catch the fish and crabs and watch wildlife. Which keeps the pool alive! The pool shows children wildlife the other pool shows no wild life that’s why it is never used because its sludge. So to get rid of a pool you get rid of wildlife as well.”

Another good point was “On the pool that has been renovated there is a sign saying no diving and warning notices if Castle Point feel that is sufficient for that pool the same sign should be sufficient for the paddling pool. The sign is massive.

Someone suggested trying for lottery money to save the pool.

The next full Borough Council meeting is on the 30 March so hopefully that is our target date.

Leigh Beck School had a meeting 7.15 on the 11 February with the Pool on the agenda.

The public asked about signs being put up when the Town Council have meetings. It was pointed out that a list of meetings was displayed in the Town Council window. There are also notice boards that will be going up shortly. The papers were informed.

Would it be possible to hold another meeting in a larger hall? Another meeting will be arrange on the first convenient time the big hall is available.

Nick Harvey introduces Dave Cross Deputy Mayor of Castle Point BC. Dave Cross tried to explain that he his position but he kept getting interrupted.

Nick Harvey introduced Councillor Peter May who also gave his position stating that they are listening to us.

Nick Harvey winds up the question time and the Town Council voted on the following.

This meeting has now been postponed until later in the month. There is however a meeting of supporters at Smallgains Hall 7.30 10th March. 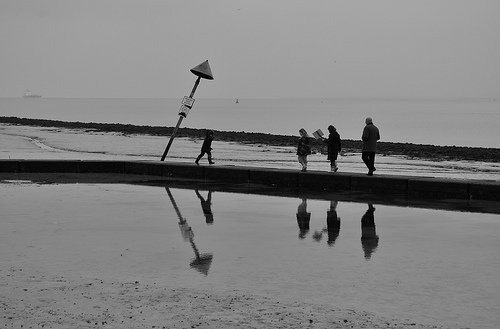 By Steve Bullock and Janet Penn