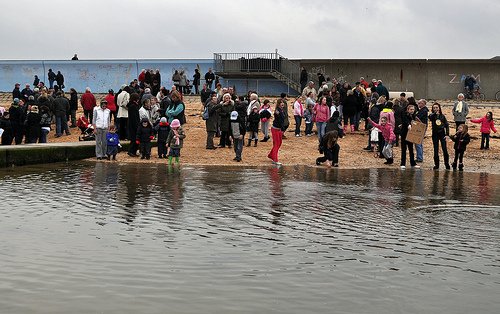 On Monday 15th February the Town Council held a Community Relations Committee meeting. On the agenda were some interesting details on the Armed Forces Day, Wildlife Day and the Canvey Festival which are to be held in 2010. Towards the end of the meeting the Paddling Pool was again discussed. The meeting was chaired by Joan Liddiard.

As you have probably read in the local papers the Town Council is about to, at last, take over management of the Lake area. I believe the paper said the 1st March. The Archive looks forward to seeing the improvements over the coming years which are long overdue.

Jeff Rickards, the events officer, gave an account of the events that are being arranged for 2010. The following are dates for your diary:

The public Forum opened with 10 minutes for members of the public to raise matters with the Town Council.  Once again the Paddling Pool was raised with Colin Letchford stating he had sent pictures and information about the pool to all the Town Council. These pictures showed the paddling pool being safer due to positioning, subject to less tidal current and not so deep at high tide.

Liz Swann said she was pleased to hear that there was to be a Full Borough Cabinet meeting with the Town Council next week (no public) and a public meeting on the 8th March at 7pm at the Paddocks. She stated that they were hoping to do something in town on the weekend of 27-28 February (more details when we get them) so that more members of the public are made aware of the situation. She also stated that on Sunday the 14th several Councillors were seen viewing the pool for themselves. She was surprised that this was not done before any decision was made. Liz also brought up the fact that the Council was using the pool in their November 2009 guide ‘for the children there are two sea water paddling pools for hours of fun’. This guide was published after the ‘inspection’ report on the pool which was done in 2008. The brochure was handed to John Anderson.

There was some discussion about the way the Borough Council is run with the Cabinet system and that many Councillors are unable to make any contributions to the decision making. This was confirmed by Ray Howard and John Anderson.