You are here: HomenextHistorynextOld CanveynextOdds and EndsnextThe delights of Canvey seafront in the early 1930s.

The delights of Canvey seafront in the early 1930s.

Looking through some trading licences from the early 1930s it’s amazing to see the variety of things available on Canvey beach and along the seafront at that time. Visitors would certainly not be short of food, drink, entertainment and most other things we expect to get – apart from a decent wi-fi signal perhaps! 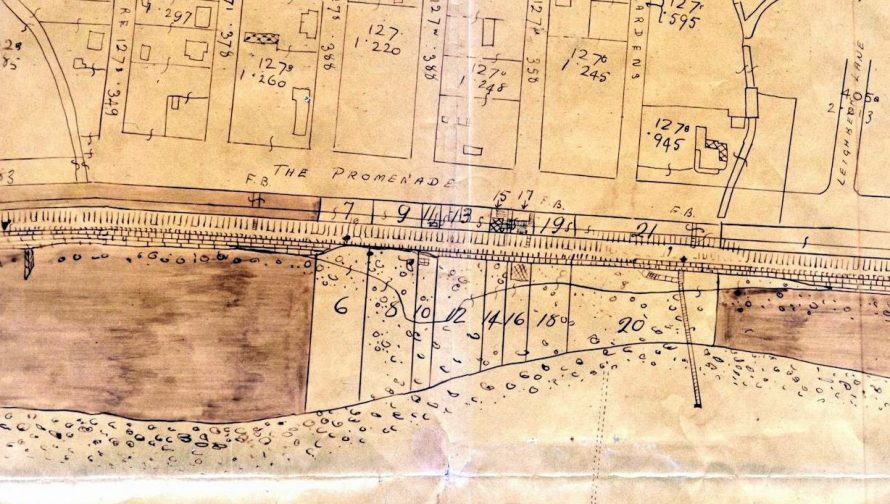 Fred Baker, an ex-serviceman, paid 2 guineas for a beach license along Lubbin’s foreshore to operate as a ‘Character Reader’. I’ll leave you to divine what that could be.

L.J.Bateman had a kiosk on Lubbins Farm Approach Road where he sold papers, postcards, periodicals, tobacco, stationery, bathing shoes, books, children’s pails and spades, rock and packed sweets. What more could a camper or visitor want?

J.Clackson paid £1 for the right to take photos on the Lubbins Estate so you could take home evidence of how lovely it was on Canvey.

The camp site at Lubbins was also served by P.J. Coulter who was allowed to sell meat pies and sausage rolls. He wasn’t allowed to sell them anywhere else and he could only have a hand basket or wheeled vehicle ie. a barrow.

In Will Desmond’s application to busk on the beach he describes himself as having worked on the stage but that he’s unemployed at the moment. He’s checked with Mr. Pettett who normally works that part of the beach, but not this season. Will tells us his songs are clean and he signs his name followed by ‘comedian’. Think what you will!

The Eldorado Ice Cream Company Ltd from London S.E.1. can only sell ice cream from a vehicle on the camp site and nowhere else. For an extra £7 they can also sell sweets and chocolate. Is your mouth watering yet? No? Well, read on.

Opposite the Welcome Hut (which was situated roughly where today’s loos are on the Labworth Green) sold hot chips, saveloys and pies. How did they get the food hot? A coal fired stove of course.

Had enough to eat? How about a flutter on the dogs? In the field to the East of the Casino was a 4 acre ‘Novelty Greyhound Racing Stadium’. It was surrounded by a corrugated iron fence which didn’t go down well with residents who thought it was an eye sore. The owners were obliged to paint the fence to make it look nicer.

Well-known local traders also didn’t want to miss out on earnings at the sea front.

Albert Jones from Jones Corner, Craven Road, was actually ticked off for having more than one hawker working the sea front but only having one license. He was politely reminded that each hawker should have a license.

Mr. J. Walker of Cash Stores in Long Road sold groceries from a wheeled vehicle on the same camp site.

Mr. Killey of Home Supply Stores, Leigh Beck tendered to have deck chairs to be placed on one of the reserved fenced strips to the north of the delft ditch.

Before the loos were in the charge of the above people, Mr. Wright from Brixton was considering renting them for £40 for the season. He is told “the lavatories are well provided for ladies and gentlemen and a charge may be made for any person (both ladies and gentlemen) using the convenience as there is no public obligation whatever. Accommodation is also provided for washing. Drainage is provided for all liquids and a burying area for disposal of solids. There is an average of 100 campers each weekend, 12 kiosk holders in the immediate vicinity for which no other accommodation is provided. Also a licensed garden club is being opened opposite which will provide a very considerable revenue quite apart from the 10,000 visitors in holiday times”.  Rather him than me! Incidentally, Mr Wright was the owner of a Gramophone Store in Coldharbour Lane where he also bought and sold musical instruments etc. and would ‘neatly repair’ them. The connection between that and renting loos is lost on me.

There was also room for the exotic because Mr. Mickle from Southend was selling pineapples and pineapple juice from his kiosk. He also sold rock. If he didn’t get your tooth enamel with one, he’d get it with the other.

Mr. Muggleton at the Shellfish Hut had problems one year finding the deposit and then nearly got in trouble with his rent.

There was also a Mini Golf site run by Un-Ltd Automatics from Shoeburyness.

And finally . . . A disappearing beach hut/kiosk.

Mr. W.J. Roberts had used the hut to sell and develop photographic film after previously selling tea, rock etc. He seemed to be under the impression that it had been agreed that he could buy the hut so he had it removed to the garden of ‘Lake Lodge’, Vaagen Road, Oysterfleet. Lake Lodge was owned by Captain Gregson who rented out the bungalow. A letter was sent to Capt. Gregson telling him that the beach kiosk on his land had been removed from the beach without permission. He was very generous in his reply and asked that Mr. Roberts should be given a chance to explain. It was then discovered that there had been a misunderstanding and Roberts eventually agreed to pay for the hut by instalments.

See what a wonderful time you’d have had?