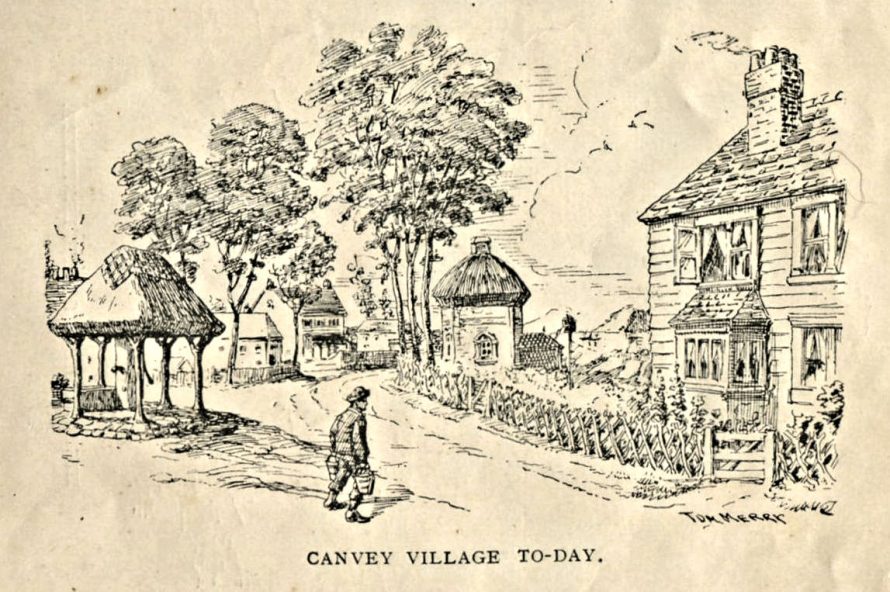 The picturesque, romantic, and historic surroundings of Canvey Island on the mainland, are manifold, and are at once both charming and interesting. Grand diversified scenery and extensive views, including land and sea-scape abound; and in every direction the eye is gladdened with a glorious synthesis of the primitive, mediaeval, and the modern, which con­fronts us on every hand. Hill and dale, woodland and pasture, fern and wild flower in profusion, are all amassed here to bid the exhausted toiler, and the weary brain-worker, a hearty welcome and a cessation from labour; while basking in the sunshine, he feasts his eyes on Nature’s wondrous gifts, and takes a “deep, deep draught ” of the in­vigorating and rejuvenating properties of a pure and ozone-laden atmosphere! But we are digressing, therefore we will hie us away to the mainland and there explore some of the actualities of the Essex coast.

Leaving Canvey village, taking the London Road northwards, and passing the old Danish causeway, we arrive at the antiquated ferry, and hail an amphibious looking personage arrayed in big wading boots, blue guernsey, and a nautical cap,  who, for the customary obulus, courteously condescends to row us across Canvey Creek to South Benfleet. While on the voyage we notice many small strange looking craft, including fishing smacks, Dutch barges and “hoys,” loading and unloading their various freights at sundry old-fashioned tumbledown looking wharfs, which serve to constitute a minature old-world port Embarking at the landing-stage, passing the Railway station—which, by the way, will bear a good deal of improvement—and crossing the line, we are suddenly confronted with the antiquated village of South Benfleet—the immediate scene of many a terrible conflict with the Danish marauders and invaders. Here, on a gentle elevation are still to be seen many traces of the ancient earthworks and primitive fortifications, hastily thrown up by King Alfred’s warriors to resist the incursions of the ruthless foreign foe—and many are the cruel memories of slaughter, rapine, and suffering they conjure up. Here also is the battle scene where King Alfred’s troops signally defeated the terrorising Hœsten, A.D. 896. The creek lying below, and which we have crossed is where the Danish fleet lying at anchor was captured, burnt, and sunk; and where, so recently as fifty years ago, when building the railway bridge over the creek, the excavators exhumed a quantity of the charred remains of many sunken Danish vessels which had con­veyed the Vikings from their northern homes hither. 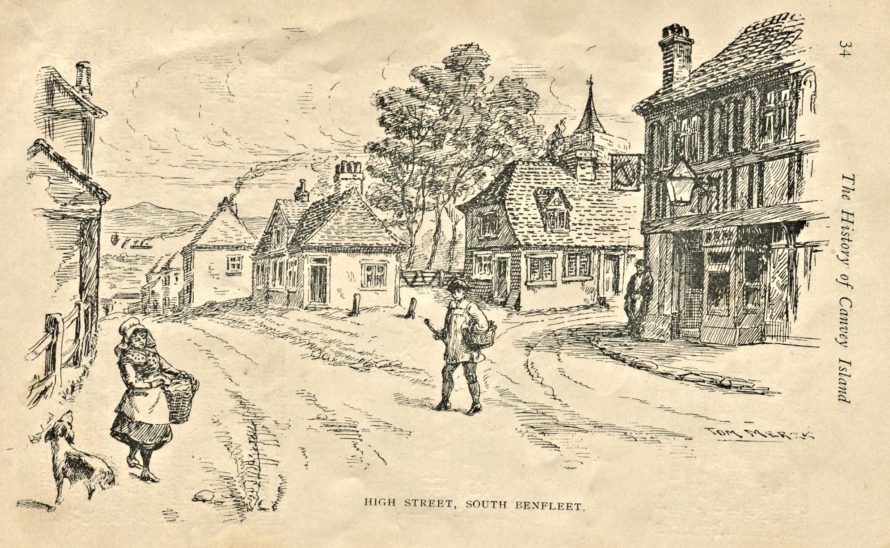 Forgetting these scenes of despoliation, we press up the main street, with its wooden houses and outbuildings, to the “Hoy Inn,” an ancient hostelry with many curious rooms, “crannies,” and beams, every timber of which could tell astounding stories of smugglers and their ways! At the back of the Inn, in a fair open and undulating country we dis­cover the grand old parish church. Every inch of ground hereabouts is hallowed with the blood of thousands of our Anglo-Saxon ancestors, who fell fighting in their country’s cause against the Danish invader. The church dedicated to St. Mary the Virgin, is of Saxon origin; but, owing to the sacking by the Danes and by rebuilding and renovation, very little of the original fabric remains to-day. The present structure only dates from Norman times about A.D. 1100. Taken all round, it is considered to be one of the finest specimens of Norman architecture in the whole county. 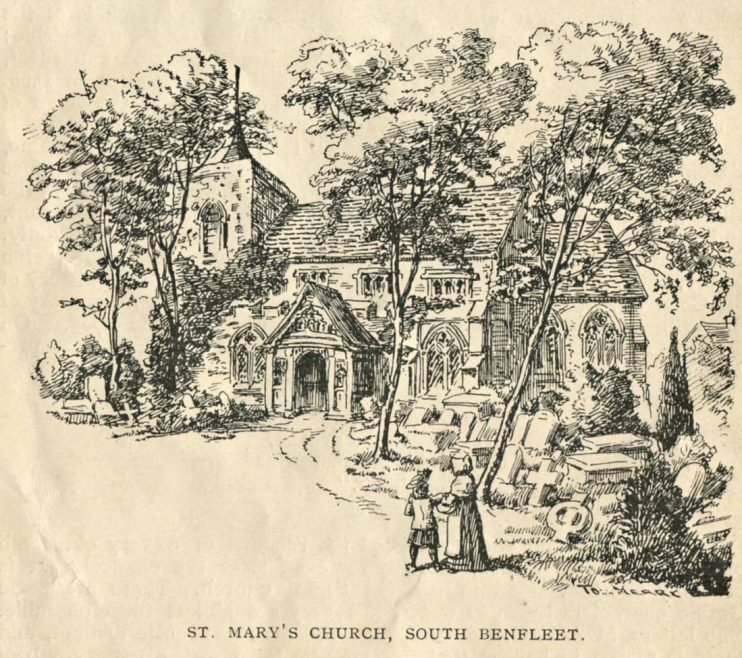 It is of noble elevation, with a remarkably fine pitched roof, and comprises a nave with north and south aisles, a large chancel, and a low West tower with a stunted wooden spire. The church is built of ragstone and ancient Saxon brickwork. There are several grotesque corbels yet to be seen in the interior. In the north wall, exposed to view, are the stone-steps which formerly led up to the rood-loft. The chancel arch is of the Perpendicular period, and the floor is paved with black and white marble; on the south side of the altar is a cinque-foil headed piscina and sheaf, also an old brass to the memory of William Cardinall, dating from 1568. This William Cardinall was the father of Faythe, who, in the reign of King Henry VIII., married Sir Roger Appleton. The brass in question is unfortunately broken at the corner, and all that remains of the surname, Cardinall, are the first four letter CARD, but, thanks to the existence of the Harleian Manuscripts, the present chronicler can supply the missing lettering, and thus correct the error which, both Salmon, Morant, and Wright have fallen into of rendering it “William Card” only. Immediately facing the altar are the tombs of the celebrated Appleton family, who for several centuries played a prominent part in the history of the County of Essex. Notably one will be recognised, it is in memory of Sir William Appleton and Dame Dorothy, his wife, dated 1705. On the same stone there is a curious epitaph on two of their sons who pre­deceased them, viz.:—

“Two blooming youths,
can You forbare a groane,
Enclosed ly,
beneath this Marble stone.”

Under the pulpit will be noticed the remains of a very old tomb plainly dated, A.D. 1016, recently removed from the chancel. It is probably one that stood in the old Saxon church. There are some Gothic characters indented on it, but they are almost indecipherable. The letters MARC, however, and the date are quite distinct, and there is reason to believe that this may be the remains of the tomb of Wymarc, the son of the Danish King Sweyn, father of that Suene of whom we have heard so much, and great-grandfather of the Suene who afterwards became known as Henry de Essex, the standard bearer to King Henry II., whom this monarch, for an act of cowardice, dis­possessed of both honours and landed possessions. The Suene family were lords of the manor of Benfleet for several generations, as were also the Appleton family for many centuries afterwards. The lordship of the manor is for the present vested in the trustees of the late W. J. Perry-Watlington, Esq., and the principal landowners are W. A. Browne, Esq.; C. A. Nicholson, Esq.; M.A., and R Varty, Esq. The present Vicar of St. Mary’s is the Rev. Charles F. Box, and the gift of the benefice has been vested in the Dean and Chapter of Westminster Abbey ever since the days of the Conquest. St. Mary’s was formerly the Parish Church of Benfleet-cum-Canvey.

In the churchyard are many interesting tombs dating from the sixteenth, seventeenth, and eighteenth centuries. The porch should be noted; it is also of the Perpendicular period, and is considered to be one of the finest wooden porches in the county, and deserves more than ordinary attention. The interior contains richly carved spandrels and embattled beams, and the gable and sides are fitted with mullioned tracery. Leaving the churchyard by the same approach, and passing another comfortable looking old hostelry “The Anchor,” we ascend the hill and when past the schools we emerge on the heights called Benfleet Downs. From this elevated point many delightful rambles can be freely indulged in amid an ozone charged breeze, and from whence fine views can be obtained of Canvey Island, Hadley-Ray, the North Sea, and River Thames—with its everchanging panorama of marine activity