You are here: HomenextArtsnextLiteraturenextArticles about Canvey IslandnextA Quaint Island Near London

A Quaint Island Near London

This article appeared in the Portsmouth Evening News on the 17th May 1901 and the Sunderland Daily Echo and Shipping Gazette on the 27th May 1901. 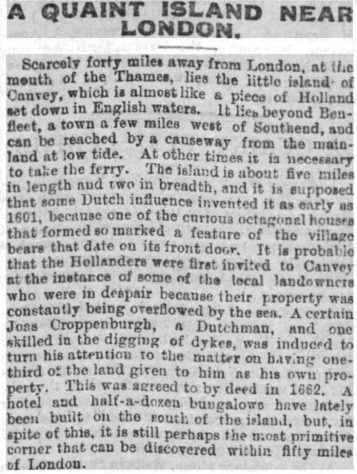 Scarcely forty miles away from London, at the mouth of the Thames lies the little island of Canvey, which is almost like a piece of Holland set down in English waters. It lies beyond Benfleet, a town a few miles west of Southend, and can be reached by a causeway from the main­land at low tide. At other times it is necessary to take the ferry. The island is about five miles in length and two in breadth, and it is supposed that some Dutch influence invented it as early as 1601, because one of the curious octagonal houses that formed so marked a feature of the village bears that date on its front door. It is probable that the Hollanders were first invited to Canvey at the instance of some of the local landowners who were in despair because their property was constantly being overflowed by the sea. A certain Jons Croppenburgh, a Dutchman, and one skilled in the digging of dykes, was induced to turn his attention to the matter on having one-third of the land given to him as his own pro­perty. This was agreed to by deed in 1662. A hotel and half-a-dozen bungalows have lately been built on the south of the island, but, in spite of this, it is still perhaps the most primitive corner that can be discovered within fifty miles of London.