You are here: HomenextArtsnextLiteraturenextArticles about Canvey IslandnextPiracy On The High Thames' - The 17th Century In The 20th

Piracy On The High Thames' - The 17th Century In The 20th 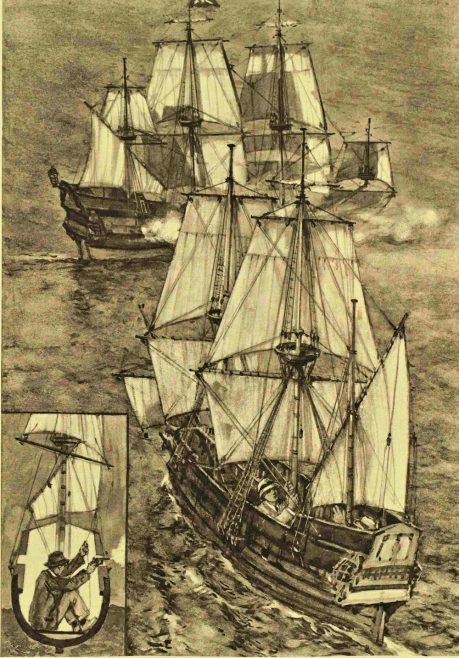 Models with crews of two or three: a “jolly roger” attack near Canvey Island, for the Cinematograph-sailing the ships and firing “guns.”

Our artist writes: “The use of scale models in cases where the employment of the full-sized object is out of the question was strikingly demonstrated in the Jutland film recently ‘released.’ In that film the models were manoeuvred mechanically—that is to say, they had no one on board. On previous occasions a naval action has been simulated by means of small ships, each supported on the shoulders of a man who walked on the bottom of a tank filled with water. Recently a British film company produced a pirate film, a few feet of which represented the capture of a merchant barque by a pirate ship. In this case the two vessels were actually manoeuvred by crews. They consisted of barges’ ‘ punts ‘—boats about fifteen feet in length.

These were built up and rigged to imitate ships of the seventeenth century. The crews were formed in each case by two to three persons, who had to crouch down on the bottom-boards in order to avoid being seen by the camera ; whilst the locality—the lower Thames—enabled the ships to manoeuvre in comparatively calm water and at a minimum risk of surrounding objects destroying the illusion of size or period. These experiments suggest that the use of miniature ships manoeuvred in this way (or even of small models) for the cinema might be of value in the study of seamanship problems, ancient or modern. In the ‘ action ‘ described, gun-fire was simulated by firing pistols through a port in the side.”