You are here: HomenextArtsnextLiteraturenextArticles about Canvey IslandnextEnd of a Thames-Side Guardian

End of a Thames-Side Guardian 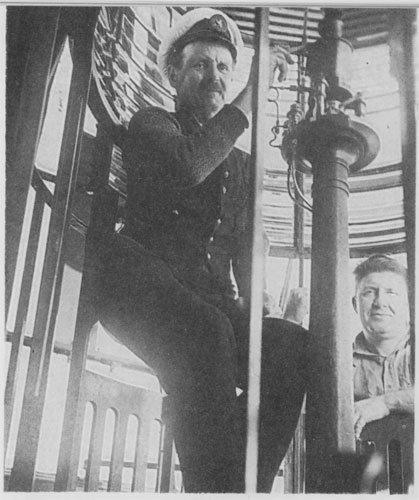 A photograph from the 1930s showing the keeper, Mr Quinton, attending to the main light

In 1847 a prosperous group of London shipowners persuaded the Elder Brethren of Trinity House to place a lightship in the Sea Reach of the Thames, to warn seafarers of the dangerous mud-flats and shoals lying off Southend-on-Sea and Canvey Island. The most extensive of these, the Chapman Sands, lying between Leigh-on-Sea and Hole Haven, have always been regarded as the last of the serious obstacles for home-coming mariners to navigate after having successfully negotiated the treacherous entrance to the river itself.

It is believed that enterprising merchants in Roman times, supported by military considerations, arranged for the building of a small signal station on Canvey Island’s most easterly seaward point. But with the departure of the Romans during the 5th century, and a consequent decline in maritime trading, the Chapman Sands remained unmarked. For centuries river-users had to rely solely on their navigational skill supported in fair weather by one or two notable landmarks that sprang up along Thameside with the passing of time.

With the rapid expansion of Britain’s overseas trade in the early 19th century, the increasing size of ships carrying larger and consequently more valuable cargoes, something had to be done “to guard the river middle” of what had become the world’s busiest waterway. Hence the meeting of London shipowners.

At the time of mooring the light-vessel at the edge of the Chapman Sands, Trinity House commissioned Mr. James Walker, a consultant lighthouse engineer, to prepare plans for a permanent lighthouse which could be erected on the site. Lack of locally available building materials, suitable for the main body of the light, and the soft, unstable conditions of the river bed were two factors which had to be constantly borne in mind during the early planning stages. 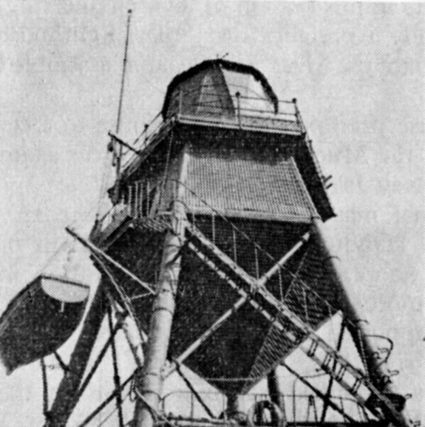 The curious structure and lantern of the Chapman Lighthouse

James Walker finally submitted a quite revolutionary design which differed fundamentally with the more usual concepts in this branch of civil engineering. The new Chapman Lighthouse was basically a prefabricated “pile” lighthouse built entirely of iron, shipped in sections to the river middle and assembled from lighters moored in the tideway.

The success of the Chapman Lighthouse prompted Trinity House to erect similar beacons on the Maplin Sands and the Mucking Flats, two areas again with foundations like those found off Canvey Island.

Painted bright red, complete with signal masts, fog siren and elementary weather recording devices, the Chapman, standing on the seaward limit of the sands, half a mile from the Canvey shore, first came into operation in August 1851, the year of the perhaps more spectacular Great Exhibition. The main body of the lighthouse was supported on seven adjustable “legs” screwed some 40 ft. or more into the soft river bed. The principal keeper and his two assistants occupied the somewhat cramped accommodation in the strangely hexagonal section directly beneath the lantern. A small bedroom, a living room, a tiny scullery-cum-lobby and a store room made up the entire living quarters. A small dinghy, supported from davits on the spidery frame, provided the only direct link with the mainland. It was a lonely but busy life. 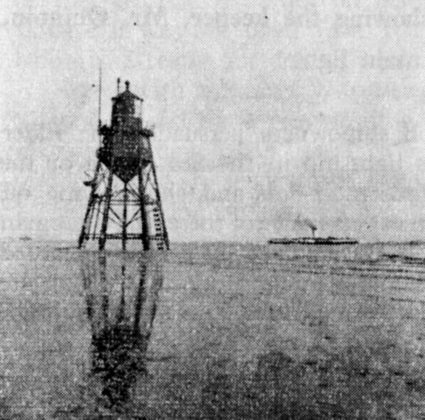 The lantern, standing about 40 ft. above the mean tidal level of the river, showed an occulting white light of 8,000 candle-power. A beam lasting 21 seconds was interrupted during a three second eclipse by a red warning flash projected through a blank sector facing the northern landward side. The frequency of these warning flashes was regulated by a synchronised clockwork mechanism. Frequent and careful maintenance on the part of the keepers kept the light in constant service.

This gaunt giant, reminiscent of the hey-day of the “iron-masters” and those “engineers in iron” added a pleasing and somewhat bizarre touch of colour and interest to the constantly changing river scene. To homecoming sailors, ploughing their way up river in the last stages of a long and arduous voyage, the Chapman Lighthouse must have presented a welcoming sight, and in the not so distant past, wartime merchantmen will recall those moments when with mixed feelings they assembled in convoy awaiting armed escorts to shepherd them into the open and hostile seas.

For over 100 years the lighthouse gave sterling service. It witnessed the death of the clippers and the advent of those giants of steam, it played a vital role in the Navy Review held off Southend in the early 1900s and many a querulous yachtsman has been grateful for its reassuring beam probing the night sky. 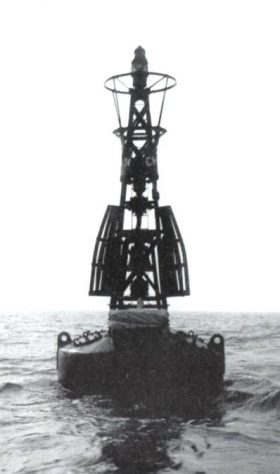 The bell bouy which has replaced the lighthouse since 1957

In the early 1950s it was discovered that the structure was being dangerously undermined in places by the effects of the scouring action of the tides and, in addition, parts of the submerged iron-work were badly corroded. Urgent consideration was given to the matter of overhauling and repairing the light, but, after carefully sifting all the evidence of the surveyors, Trinity House finally decided to replace the light entirely.

In August 1957, almost 106 years to the day since the light was first exhibited, Mr. F. H. Roberts, the last of a long line of keepers, left the Chapman Lighthouse and within a few months no trace remained of this “guardian of the river middle”.

Today, the Chapman Sands are marked by a large, black bell-buoy. Its effectiveness and economy are unquestioned. Its triple white flash is visible over a distance of 11 miles in clear visibility and in fog or river mist a wave-actuated bell warns passing vessels of these dangerous shoals.

But many still regret the passing of the lighthouse. On a still night the dull metallic clang of the distant bell-buoy can be easily heard by those ashore. Its plaintive note seems a poor epitaph for the century-old colossus that once commanded the Sea Reaches of the River Thames.