In Archaeology, this rather flat piece of Essex is well known for its “red hills”. Canvey’s history extends back over two thousand years but just what are the red hills, why are they red and what do they tell us about this history?

In 1937, Islander Ernest Linder (see The Red Hills of Canvey Island) investigated several Canvey red hills. His finds included burnt reddish cindery earth, “briquetage”, bones, oyster shells, Romano-British and some medieval pottery. Amongst his conclusions were that red hills were associated with the Roman production of salt by heating and evaporating seawater.

In the spring of 1978, very high tides and strong winds led to significant erosion at Leigh Beck and Canvey Point. An oval of bright red fired clay was exposed on the surface and, that year, Phil Johnson and the Castle Point Archaeology Group excavated it (see Excavations at Canvey Point). This resulted in the discovery of two oval chambers (each about 1.5m x 0.75m) of fired red clay set in red hill material and with flues. The chambers were interpreted as hearths used to provide the heat for evaporating seawater to obtain salt. In 1982, a second CPAG excavation discovered a second hearth complex, of three chambers each about 0.9m x 0.45m.

As part of the late 1980s Hullbridge Basin Survey of the intertidal zone of the Essex coast, T. J. Wilkinson and P. Murphy of the ECC Archaeology Section carried out a detailed examination of Leigh Beck. In a 2-metre deep sequence, finds included red hill materials and Iron Age, Roman and medieval pottery sherds. Both human rubbish and natural death assemblages were present and in some cases these were mixed together raising the possibility of land protection or reclamation. Assemblages of particular types of bones suggested the possibility of sheep farming and fishing activities.

By 1990,a total of 16 red hills had been identified over Canvey as a whole. In eastern Canvey, evidence of two Romano-British cemeteries and a lot of pottery had been found as well as the red hills and salt-working remains.

In 1993, Neil Faulkner and the Rochford Hundred Field Archaeology Group carried out excavations at Leigh Beck. Up to thirty Volunteers, RHFAG and CPAG members spent 3 weeks carrying out a field survey with test pits and trial trenches, a 50 square metre area excavation and an investigation into red hill features exposed on the foreshore. They were working on the western edge of what had been quite a large red hill, the rest having been eroded away since the old sea wall had been breached towards the end of the nineteenth century.

Beneath the topsoil, they found grey clay with chalk nodules, interpreted as the old 17th century land surface remodelled during the building of the Dutch sea walls. Below this was a medieval zone with layers of orange-brown alluvial clay, shells, bone, flint and pottery. Underneath the medieval layers were Roman red hill deposits of highly fired orange clay (the remains of hearths), fine yellow clay (from seawater settlement tanks), cindery gritty red / black earth with charcoal and broken fragments of briquetage (broken pieces of shaped fired clay) and the remains of the hearths and settlement tank structures themselves. There was also Roman pottery.

The weather was good but working conditions were very difficult, always in soft wet mud and with parts of their work getting flooded by the rising tide.

Exposed on the foreshore, RHFAG found the partly eroded remains of up to 12 possible salt-working units. They examined one area of settlement tanks and one of a complete saltern (salt-working unit).

The settlement tank unit was 9m x 2.5m of unfired yellow clay resting on gritty red / black earth with briquetage. Shaped into the clay were 3, or possibly 4, tanks, each 1.5 x 1m. Originally, these would have been very close to some hearths but of these there was no sign.

The salt-working unit consisted of tanks, hearths, a working surface and a possible stoking area, all close together. The three tanks, built of yellow clay, had steep walls facing the hearths and gently sloping walls facing away. The tanks would have held seawater while presumably sediment settled out.  The two hearths were of thick orange fire-heated clay and would probably at one time have had clay vessels containing seawater supported above them which would have been heated from the hearth and the water boiled away to leave the salt. Between and around the hearths and tanks was a very hard flattened working surface of brown clay and briquetage with a possible stoking area of blackish almost rock-hard compacted burnt clay and charcoal. RHFAG found no surviving clay vessels or supports used with the hearths. These are likely to have broken up to form briquetage which became part of the red hill deposits and may have been removed by the sea. 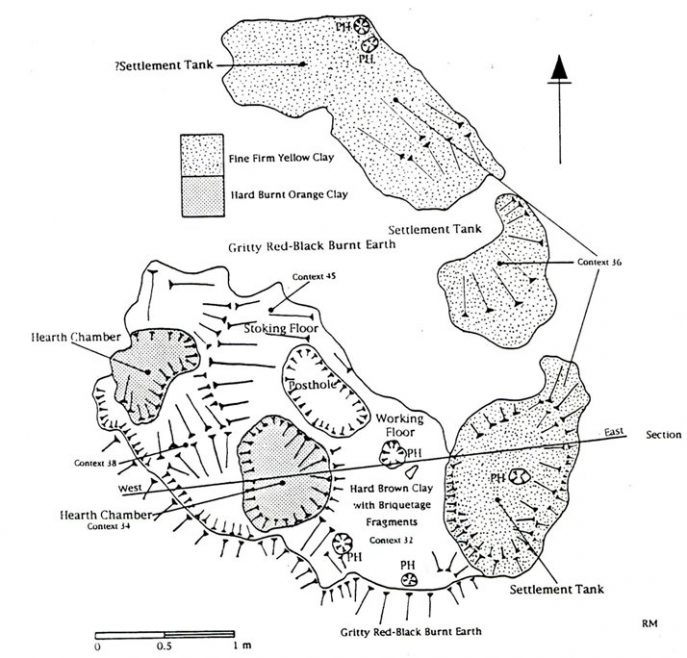 Canvey is not the only place with red hills. They occur around Essex and East Anglia in coastal areas (present and past) and along estuaries. Essex alone has over 300 but there must have been many more with an unknown number having been destroyed by ploughing, building development and coastal erosion while others may remain as yet undiscovered. They vary in size but can be up to 100 metres or more across and with a present height above the surface varying from zero, where they have been ploughed flat, up to a metre or more. To-day, if they have any height at all, they appear more like mounds than hills though what their original height may have been is not known.

Red hills are dumps of material from salt-working in the past where heating and burning were involved.  The reddish coloration can vary from a dry chocolatey colour to a wet reddish brown and there are often other colours present such as orange, pink, purple and white. Recent excavation of red hills by Oxford Archaeology at Stanford Wharf, 6-7 miles upstream from eastern Canvey, has suggested the reddish colours may result from the burning of salt marsh sediment attached to the saltmarsh plants being used as fuel.

Salt should not be undervalued. With our freezers, fridges and additives we may forget that in past times the curing and preservation of food was of vital importance and it was salt that was used for this, as well as in food flavouring and in various medicines. The Roman army even gave its soldiers a financial allowance (from which we get our modern word “salary”) to buy this essential salt. Salt was a major and valuable commodity and the production and supply of this would have been a very important industry in the past.

Since RHFAG’s 1993 excavation, the landscape beyond the sea wall at Leigh Beck has changed. The Island Yacht Club development has taken place, the old concrete barge has gone and the area RHFAG was investigating has been eaten away by the sea.

We can never take our archaeology for granted. Sea level is higher now than in Roman times – though by how much is a matter of debate – and global warming is resulting in the level continuing to rise. Sea level is a relative thing which can also be affected by the land level falling. The southern North Sea and the lands bordering it are tectonically sinking at a rate of up to 2mm a year.

Relative sea level rise has been a matter of great concern to many for some time. In the late 1990s, English Heritage initiated a programme of Rapid Coastal Zone Assessment Surveys (RCZAS) to enhance the knowledge of the coastal historic environment and inform future Shoreline Management Plans. When Leigh Beck was visited by the ECC Archaeology Section in the early years of this century, it was found that the medieval shell midden and red hill deposits and saltern structures recorded in the RHFAG 1993 work had largely eroded away. Overall, it was calculated that in a recent 20-year period, about 20 metres of marsh had been removed by marine erosion. This eating away at the unprotected land continues. Even in the ten-year period 2003-2013, it is possible to see changes in the Leigh Beck area on Google Earth historical imagery.

Looking back, the investigations on Canvey have produced evidence of Iron Age and Roman saltmaking industries and a history of activity and occupation from these times through Saxon, medieval and later periods up to the present day. These investigations have been carried out by amateur and professional archaeologists, volunteers and keen Island residents and many have been involved. Two Islanders who stand out in particular are Geoff and Norma Lewin, both sadly no longer with us, and their contributions have been outstanding. Not only were they CPAG and RHFAG members who took part in all the excavations, it was they who spotted the surface features which led to the first CPAG dig. Over many years, they also built up an amazing, very significant and much-visited collection of finds from the foreshore.

As the past vanishes, we should perhaps be grateful to those professionals, amateurs, volunteers and residents who have helped to preserve what can be preserved of the past and to record what cannot.

Further information about Canvey red hills can be obtained from the Ernest Linder, Warwick Rodwell and Phil Johnson articles on this website.

The full 1993 RHFAG report (Mackley, Roderick & Faulkner, Neil, 1994, “Excavation on the Leigh Beck Marshes 1993”, Rochford Hundred Field Archaeology Group) should be available in some libraries and the Essex Record Office. RHFAG has continued to be an active archaeological group and has a small and rather basic website at http://www.essexinfo.net/rhfag/.

A useful source of information on red hills in Essex has for some time been Fawn, A. J., Evans, K. A., McMaster. I. and Davies, G. M. R., 1990, “The Red Hills of Essex – Salt-making in antiquity”, Colchester Archaeological Group.

An article about excavating at Stanford Wharf was published in the March, 2013, edition of “Current Archaeology”. The detailed excavation report of this (Oxford Archaeology Monograph 18) can be downloaded from http://library.thehumanjourney.net/909/.

On behalf of the Archive I would like to thank Ian for putting this article together for us and in a way that we can all understand. Editor