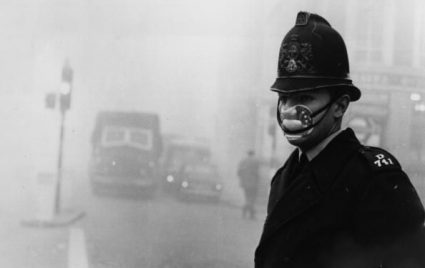 During the 1940’s and into the early 1950’s and before the strict “anti pollution” programs were initiated in Great Britain the “Pea Souper Fogs” originating in the London area would sometimes extend down to Canvey Island.!!!

I recall one particular incident on Canvey when the term :”couldn’t see my hand in front of my face” was true.

I had just equipped my bicycle with a Dynamo light system and was trying it out during that fog, it was fun to see the long beam on my headlight trying to pierce the fog.  As I passed the Haystack I noticed a double decker, fully loaded with passengers but just sitting at the bus stop on Long Road. I assumed that the driver was a bit leery about attempting the trip to Benfleet in such a thick “Pea souper”.  I rode slowly up to the bus and offered to ride in front of him to Benfleet and that I would make the usual stops too. I told him that I would probably be able to see the kerbs and lines on the road with my good headlight.  So off we went, slowly but at least making headway, and although it took a long time, we made it to Benfleet.

I can tell you that both the driver and his passengers were pleased with my “Good Deed”.  I also remember that when I finally arrived home, the fog was so thick that I had to watch very carefully for the turn into Marine Approach from Furtherwick.!!