Three Men on a Walk around the West of Canvey 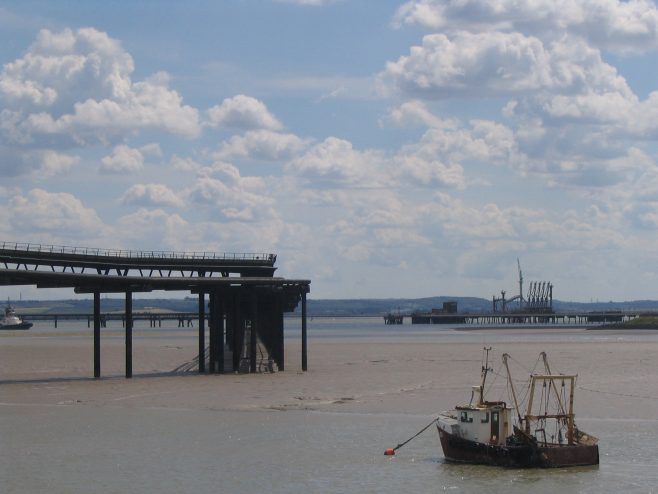 On 07/07/07 three men made a walk to the ‘World’s End’, in the steps of their ancestors around the western side of Canvey Island. Dave Bullock’s pictures were so colourful and so plentiful, I felt I was there when perusing them. I just had to put finger to keyboard…. 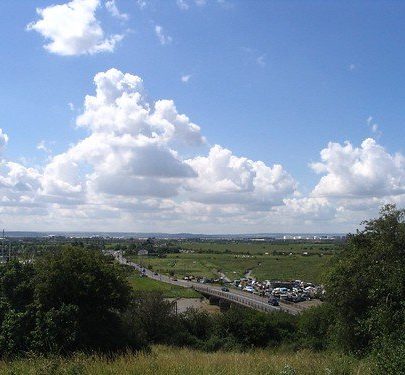 There was a time when everybody - except sailors - arrived at Canvey this way, up and over the Benfleet Downs to the stepping stones or the ferry, from the original Benfleet village, where today a new housing development near the car park may seem a little overcrowded, but that's only for historical reasons! People were packed closely together in the Middle Ages, too. Enter the Downs and the Country Park to a great view of Canvey and Coryton.
Dave Bullock 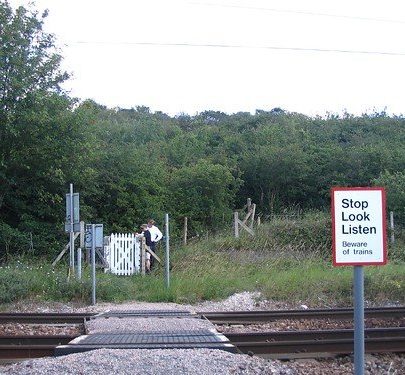 Came the railway and people crossed by the wooden station that burnt down in 1903 and was rebuilt nine years later in today's more westerly position. Then people crossed over the tracks by the barrier where the taxis now wait, until the underpass made that unnecessary in the 1960s.
Dave Bullock 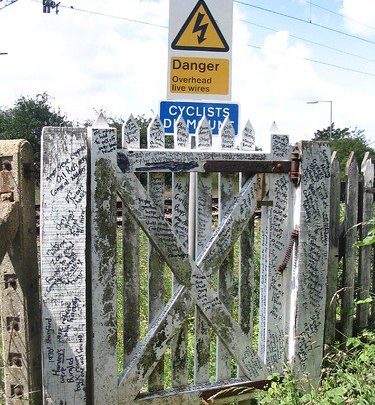 The old track over the Downs, crossing the rails by the former station, is still there, guarded by signs 'STOP', 'LOOK', 'LISTEN' and what must be the most literary railway crossing gate anywhere. A storybook, it ought to be preserved with its odd graffiti comments, its gossip and world-encompassing sentiments: 'Chris Griggs cried over Biafra', reveals one of the statements.
Dave Bullock 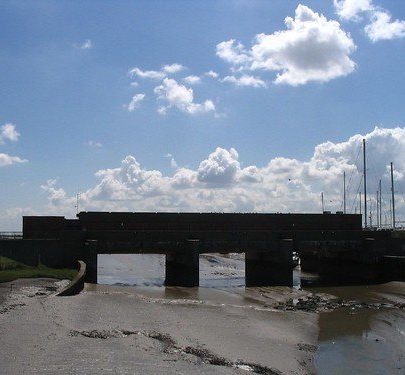 The flood barrier, will it be up to it? Cross the bridge and the creek where once Viking longboats gathered, before King Alfred's men beat and scattered them, and a 'WELCOME TO CANVEY ISLAND'. 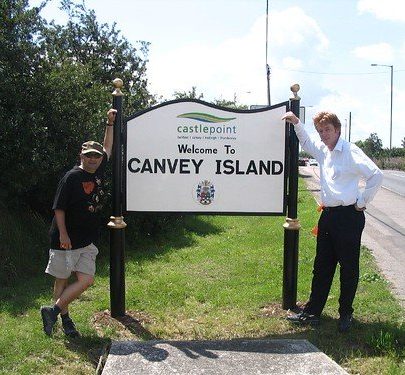 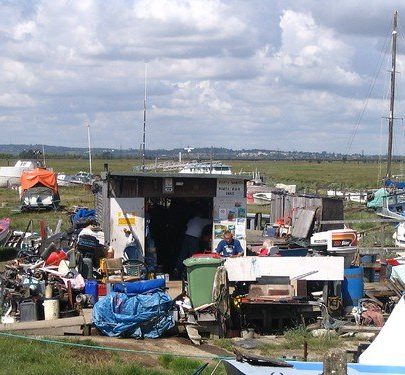 First impressions: The Vikings are back. 'BOATS WANTED, BOATS FOR SALE', at Chaos-on-Sea. A boatyard of the humble kind in the mayhem tradition. Scrap metal fishing. Tarpaulins and ropes and canisters. Engines and chairs. Do you repairs? Wellies on sticks. Anything fixed? 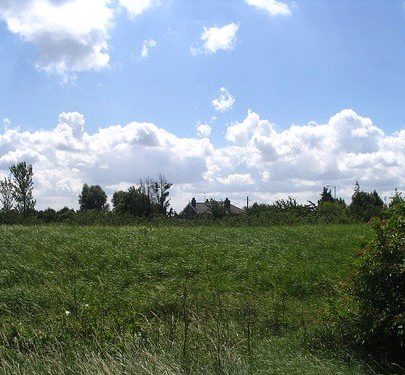 By the wayside the old main road flood barrier is a staunch reminder of where we are. Waterside Farm to the east. 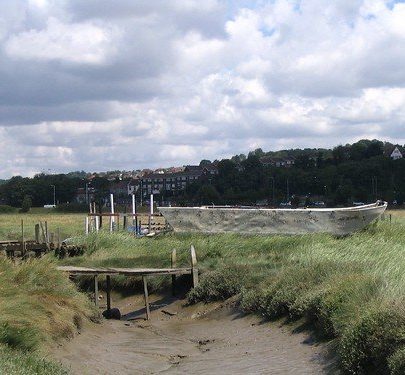 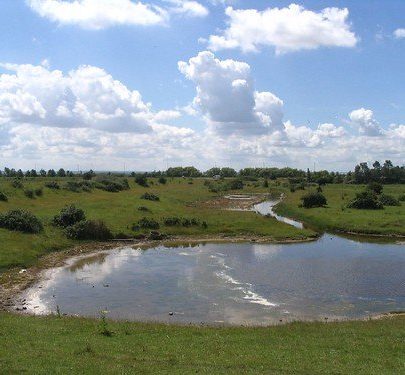 The inevitable shopping trolley. Nature fights back in a water creature's private window box. A watery landscape, a former quarry for walling material, now a shiny lake reflecting the towering cumulus clouds overhead that fill the half-dome of the sky. 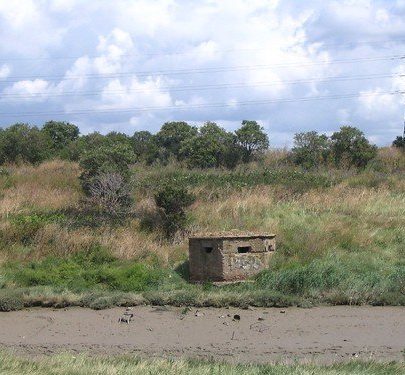 Looking back to the Downs, a WWII pill-box on the Benfleet side, facing the aggressor approaching from Canvey. 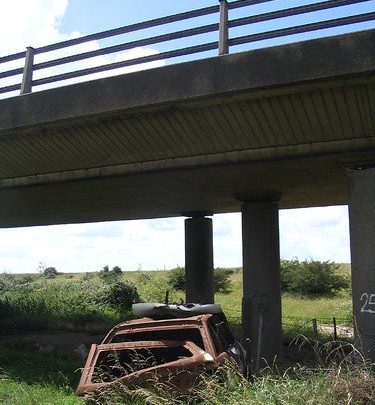 Striding overhead on stout concrete legs the 1971 New Road, crossing over, carrying traffic from the north-west, not elegant but businesslike. When they dug the foundations for supporting pillars on the northern creekside, evidence of past habitation was found, life and industry on these shores a millennia or two ago. Under the concrete structure cower abandoned cars, burnt out, their secrets burnt with them. 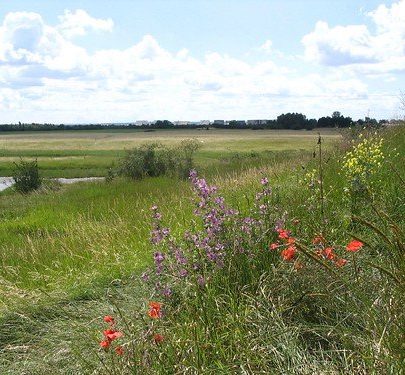 Nature reasserts itself. The edge of a field, cowslips and brambles and butterflies. Wild flowers, tamed land, old ditches. A road to Northwick Farm. 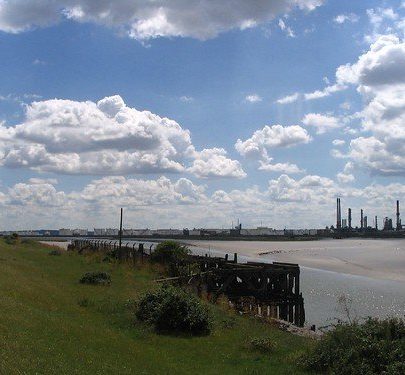 Relics of wars, the old anti-aircraft Battery. Relics of industry. Refineries. Warning signs, wharfs, a wooden wharf and a concrete one. 'DANGER. KEEP OUT.' 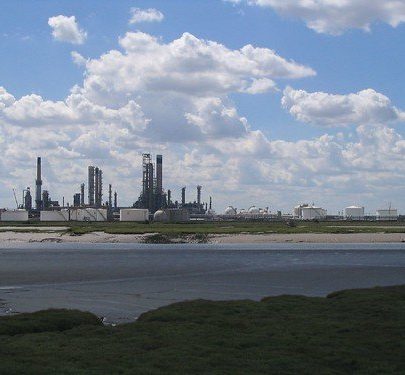 Upper Horse Island with its man-made, mysterious enclosure, keeping its mystery in front of a skyline backdrop of some nightmarish city of the future. A view to Shell Haven and Coryton. We may love it or hate it, but we cannot live without it. Pipes and jetties, mud-based and steeped in past activities. 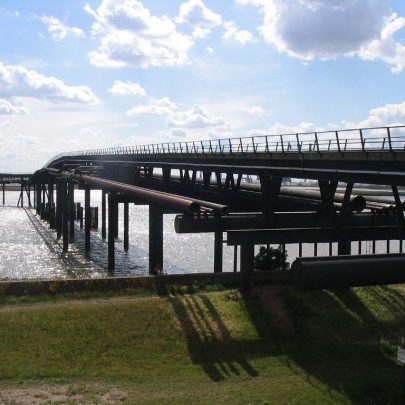 Another abandoned wreck. The iron structure millipede of a modern folly oil refinery jetty reaches out into Hole Haven, tempting the wanderers with a make-shift ladder. In 1973 Canvey Islanders were up in arms at the invasion by oil giants. Today, invaded by hobby fishermen, the jetty stands unwanted by industry since before it was even finished - overtaken and made obsolete by new developments. The longest jetty in Europe at a mile in length stands idle. The American company Occidental spent £10 million on it. Both Occidental's and the Italian United Refineries' land was eventually left fallow. Landscape abused, hurrah, never used. 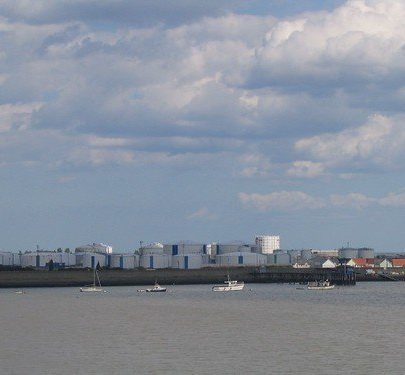 Our intrepid three quite obviously enjoyed their experience of the structure with views of fishing boats, a tug, a dredger... Looking east, more of Canvey's jetties come into view. The Coast Watch Jetty with its tiny cottage, the home of volunteers looking out for and after all that happens out on the wide expanse of the Thames. Inland, where Sluice Farm once stood, the outbuildings are reached via a filled-in creek, that once was part of the divisions of the Five Islands of Cana's People. 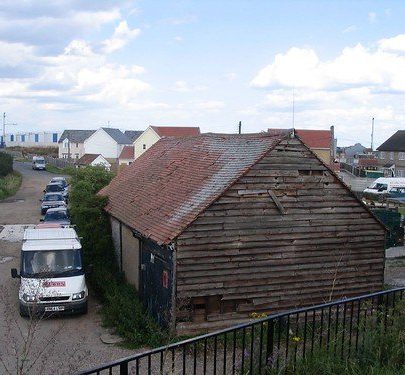 At the Lobster Smack, looking down from the lofty concrete of the latest sea wall, the old traditional barn is in need of a few nails, but the fare served up to the peripatetic trio in the fresh summer air seems worth the effort. And the beer doesn't last long, either. In the 18th century the tenacious survivor of floods and good and bad times, with an unbroken history of serving its clientele, landlubbers and mariners alike, was called 'The World's End'. Here mingle memories of Dickens and Dutch, smugglers and coastguards, pugilists and charabancs, eel boats and hoys and russet-sailed spritsail barges. 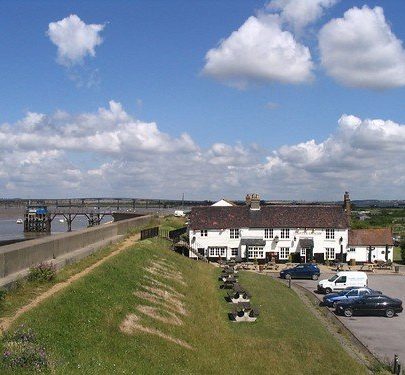 As you turn back inland, to the caravans and storage depots, you turn your back to the lawn covering the bank of the sea wall by the car park, where someone, disgruntled with modern times, has incised in large letters the legend: 'TODAY SUCKS'...