You are here: HomenextArtsnextArtnextCanvey in Art

Do you know the artist? 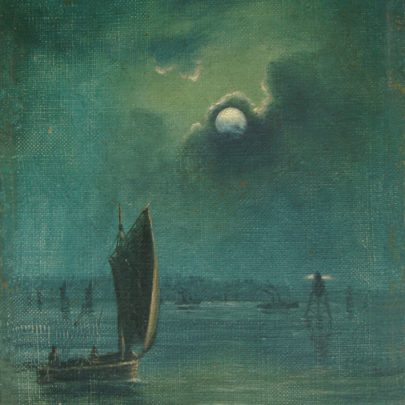 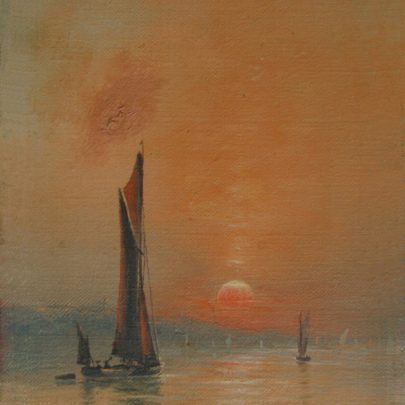 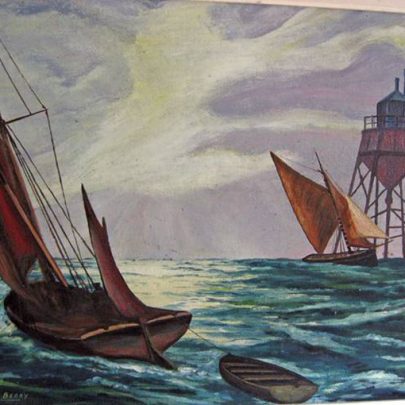 Does anyone recognise the name C.L. Shayes?

In an effort to trace local artists from the past, especially those who illustrated local scenes, I had been told about Harry (Jack) Russell, one of a ‘bohemian’ group of settlers who apparently lived on a houseboat in Benfleet Creek. A mark of recognition, I was told, was that his work always featured the Chapman Lighthouse in the background. I managed to speak to one of his sons, Simon Russell, and there may be more information forthcoming.

Then Graham Stevens produced two paintings from his attic, one of which shows the Chapman Light. They’re obviously a pair, day and night near Canvey Point. Alas, the curly signature is difficult to decipher, but may well read C.L. Shayes. I may be wrong. Both are signed, but the moonscape is also signed on the back.

The moonscape includes the Chapman Lighthouse and possibly a bawley? The pencil inscription on the back of the wooden stretcher reads: ‘Original Oil Painting Chapman Light Canvey’.

The sun scene has been damaged and repaired with a sticky plaster on the back. It depicts a Thames barge in the foreground and carries the message ‘Original Oil Painting Leigh Beck Canvey Point by Shayes’ in faint pencil on the back. Can anyone elaborate on that information?

(Thanks to Graham for the loan of the paintings.)

I have recently been in touch with Cyril Shayes, grandson of C.L. Shayes, who now lives in Norfolk. His father and grandfather (the artist) moved to Canvey from Leytonstone in the early 1900s. They lived in a house by Canvey Point, ‘round about where the buses turn, past the Jellico and near the Junior School’. The name of the house was ‘Roquest’, it was circular and made of corrugated iron.

He has a picture by his grandfather hanging on his wall. When the low evening sun shines through the west window it simply glows, he told me. The Royal Flying Club shot down a Zeppelin in 1916. C.L. Shayes later painted it from memory. Martin Shayes, great-grandson of the artist is presently at sea. On his return we may get an image of the painting.

William Mecham, under the artistic pseudonym Tom Merry, illustrated ‘The History of Canvey Island and Surrounding Neighbourhood’, an advertising venue for Frederick Hester and his son in 1902. Author was Augustus A. Daly. Tom Merry’s drawings show an enhanced view of the area and its amenities, but they are nonetheless a valuable visual archive of the time. We have, for instance, a record of the steamer SS ‘Benmohr’, partially submerged, which ran aground on Canvey on 6th February 1902, the source of all those cement barrels that occasionally can still be found on the island and its shore. Tom Merry was not able to finish the assignment. He died suddenly at Benfleet Railway Station on 21st August that same year. He was 49 years of age. The last five cartoons in the booklet are by J. James Proctor.

We already know about Paul Smyth, there is a connection to his work with his story on his site. We have also become familiar with the 1895 photographs by W. Mawer, thanks to the generosity of Richard and Barbara Kovelant of Annapolis, Maryland, USA.

But does anyone have information on May Bettany, who came to South Benfleet in 1938 and produced her iconographic black-and-white pen drawings and sketches up to the time of her death at 83?

Iris Sugg, neé Knightley, who was born in Benfleet in her parents’ newsagents between the Anchor and the churchyard, has produced colourful paintings of Benfleet as it used to be.

While on early postcards the Well at the centre of ‘the village’ was a favoured view, artists seem to have been attracted by the Chapman Lighthouse. Dave Bullock has just added this evocative image, which belongs to friends from Suffolk, the Windells. Are they bawleys that ride before the wind, towards that strange cloud and its ghostly tentacles? The artist is George Berry. Is there a story attached to it, Dave? Do we know the artist? How did the picture get to Suffolk?

P.S.: On the subject of Harry (Jack) Russell and his Chapman Lighthouse paintings it has just come to my notice that one of his works can actually be found at Canvey Library – in a back room.
If you know of any others, please let us know.