Its Full Steam Ahead

This is an extract from an article from the Essex Countyside by C F Brown dated 1983. The railway has gone from strength to strength giving many Canvey youngsters a great ride around the fields at Waterside. The second photo is from a collection from Paul Judge and you can see more here and a video of the track and history here. 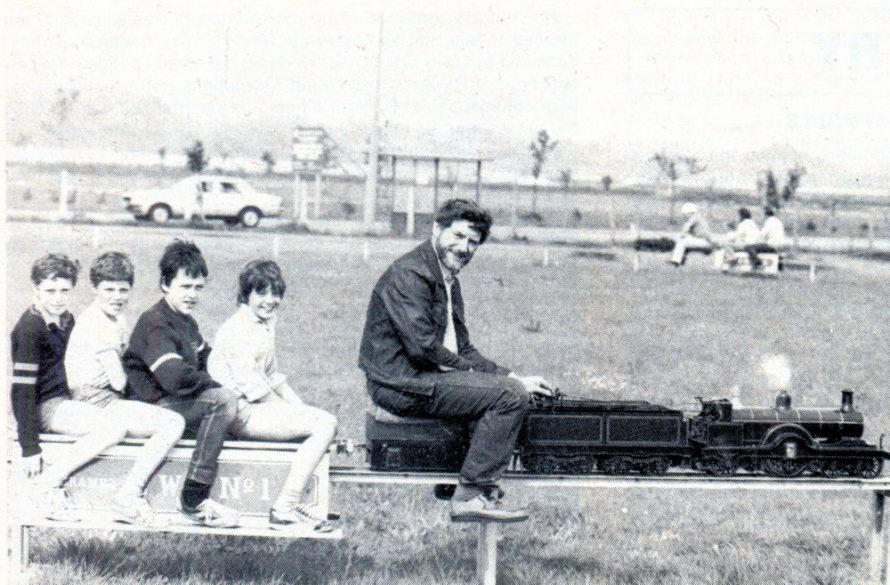 Ken Acres giving a group of children a ride to remember

The story of Canvey’s first ever steam railway began in 1976 when the club was found­ed. Indeed, almost from the time of its inauguration, the avowed aim of its then small band of members was to site a track somewhere within the confines of this tiny island.

The idea essentially was that the project would be self-financing by means of “steaming-up” sessions – with a portable track-at fetes and gala days, or through regular club outings and dances, and that to save cost, most of the work involved would be per­formed by the members, ex­cept, of course, where specialised help was needed.

With these resolutions firmly in mind, the club then ap­proached Castle Point District Council for permission to lease an already chosen site close to what was later to be the massive Waterside Sports Complex. This was readily agreed to-at a nominal fee, reviewable annually, but plan­ning permission to erect the track was not to be so easily obtained, for a great deal of work was needed in deciding and preparing constructional details.

It was now 1977. A year later, and two years since the project was first launched, the details were approved in princi­ple by the District Council Engineer and permission given to go ahead.

The task of constructing the track had started some months previously, not only in members’ own workshops, but also in the well-equipped Van Muyden Evening Institute at Canvey, and eventually, in the latter half of 1978 installation work began. 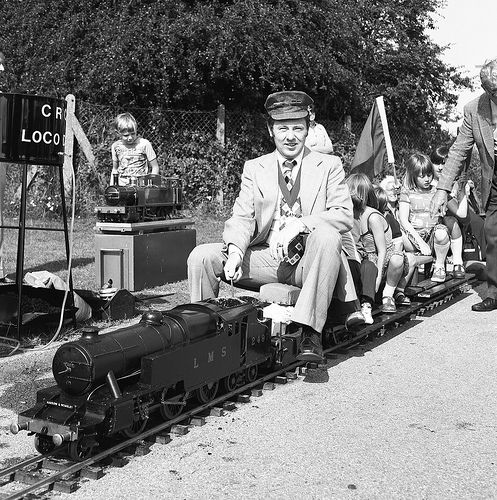 A preliminary survey, how­ever, revealed the presence of gas mains, so, before mapping out the track with marker posts, it became necessary to call in officials of North Thames Gas Board who quick­ly resolved the difficulty by in­dicating their exact position. It was now a question of either avoiding the mains altogether or simply making provision to span them with concrete “rafts”.

Once this problem had been overcome, the next job was to bore a series of holes at predetermined intervals into which the support legs for the rails would be concreted. A motorised auger with a 10 inch bit certainly simplified what would have involved hours of laborious spade-work.

It seems rather ironic that the material used for both sup­port legs and rails was one inch square signal rodding purchas­ed as scrap from British Rail, and that because of a shortage of this commodity, supplies had to be obtained from as far afield as Northampton. Never­theless, the club found enough to finish the length of track.

On September 5, 1981, a Phase 1 opening ceremony, to which the council chairman and other dignitaries were in­vited, was held. Approximately half the total length of track had been laid. Each of the members donned Edwardian costume and those with carpentry experience managed to mock up a full-scale station complete with box office. A working signal too added a touch of authenticity and what was more important, perhaps, was the fact that 650 feet of track-out of a total of 1750 feet – provided the many “passengers” who turned up on this balmy September day with a ride they would always remember. Even the council chairman, who opened the proceedings as planned, thoroughly enjoyed himself driving the locomotives up and down the track.

Extract from an article 1983