You are here: HomenextArtsnextLiteraturenextMagazinesnextEssex CountrysidenextMy memories of Canvey Island fifty years ago

My memories of Canvey Island fifty years ago

This article was published in The Essex Countryside in August 1965. It was written by B.T Flight ‘who as a boy spent his summers on the island’. His story starts in the early 1900’s and ‘captures some of the atmosphere of the islands more peaceful days before the mass invasion’. 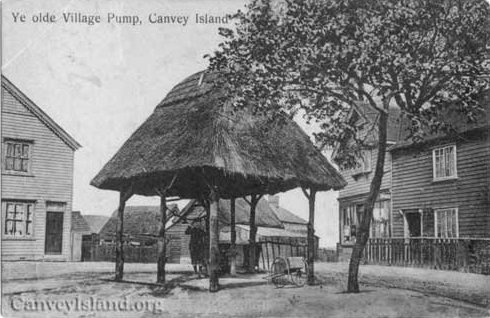 An old photograph posted in 1906 of the pump at Canvey Island. Written on the back of the card is: “This is the only drink we could get on this barren island. Poor Will cried for a Bass and gently murmured ‘Beer, glorious beer'”

I suppose my parents must have been among the first visitors to Canvey Island fifty-five years ago when they purchased some land for camping. Certainly they were ahead of the influx which began towards the end of World War I and is still going on, and it is a matter for reflection that the land they bought cost £1 per plot compared with over £500 today.

Our early tents were pitched in a large open meadow, flat as all land on Canvey, with no other habitation between us and the distant sea wall wending its way round the island’s circumference. In those days the island was virtually an immense enclosed meadow, green and peaceful. On a summer day, with larks singing above against the low buzz of grasshoppers, or in the cool evening with the plaintive call of curlews coming from the saltings, one had a sense of repose and contentment rarely found these days, least of all on the island itself, with its traffic- crowded thoroughfares, amusement parks and other marks of “progress.”

I do not recall having seen Mr. Hester, the subject of correspondence in recent issues, but there was plenty of evidence of his ambitious schemes, including the pier and the tramway track with its half-built powerhouse. The track ran from the Winter Garden —which in a sense was the hub of his project and where there was the nucleus of a model village—to Small Gains Creek. 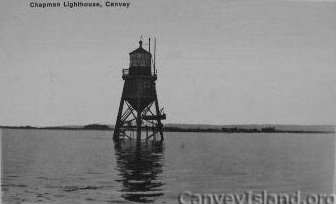 A once familiar sight to people on Canvey Island: Chapman’s lighthouse, from an old photograph.

Parallel to the track, though some way off, ran the lake itself, bordered by rushes—the remains of a sea creek which at one time must have bisected the island and which Hester planned to convert into a Venetian waterway. At the Winter Garden and elsewhere were several picturesque bungalows of unusual design, including a “Swiss cottage” reputed to have been transported from an exhibition. The power-house was blown up during World War I, so it was said, in case an invading German force used the concrete foundations as a heavy gun emplacement.

By that time our own bell tents had given way to a small bungalow, later to be replaced by a larger one, and our tents were brought out only if we had a party or if we boys asked. At the end of the war more visitors appeared in increasing numbers as the island became popular, with the oddest habitations, ranging from horse-buses and pantechnicons to house-boats, and it was some while before the standard of buildings approached the early bungalows of Hester’s time.

In the early days travel on the island was primitive. When the time came for us to return to London at the end of the school holidays it was always necessary to arrange a few days beforehand for a horse-drawn trap, and we youngsters were posted as look- outs on the sea wall for its arrival. As soon as it appeared we began our struggle with suitcases and hampers across the meadow paths, then along the sea wall, and so to the road and the waiting vehicle. The trap, with all of us aboard, jogged along the raised straight road which traversed the island, through the quaint village at the island’s centre, and on towards the station at Benfleet.

The whole journey to the station took just over an hour if the tide was out, enabling the trap to cross the ford, but twenty minutes longer if it was in, as the trap disembarked us some way from the ferry and the heavy rowing boats might be on the other side unless the ferrymen had spotted our approach. The end of the war, however, saw a spate of small converted ambulance vans, which quickly replaced the horse-drawn vehicles, only to be succeeded later on by larger motors and finally by buses. 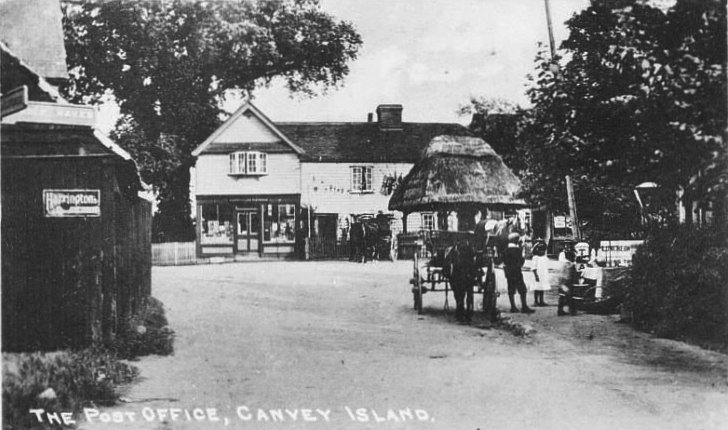 An old photograph of the post office at Canvey Island. It was posted in 1923. Written on the back was: “It is simply lovely here and we have almost decided to have a bungalow for our next holiday”.

One of my favourite trips as a boy was to cross at low tide to Hadleigh Castle and the Benfleet Downs, and often we used to go to the point which stretches out towards the river mouth or to the beach on the southern side. The cockleshell beach was much then as it is now, but a few years before World War I a barge laden with barrels of cement had foundered off the old sea wall and the cement, solidified by the sea, still in barrel shape, was used to make a causeway out towards Chapman’s lighthouse, which stood on the sand about a mile off the island.

Sometimes we walked along the sea wall to the Lobster Smack, one of the most romantic old pubs one could hope to find, passing on our way Dead Man’s Bay, with its great sign indicating the northern end of the trans-river cable, and Kynochs hotel standing in complete isolation and to us a place of mystery. The Lobster Smack is tucked down in the shelter of the sea wall by Hole Haven, the deep-water bay well known to yachtsmen. Looking at the Lobster Smack one can well believe the legend that it was a smugglers’ inn, an impression strengthened by the coastguard station directly opposite, which was then manned.

I developed a profound admiration for the Dutch engineers who reclaimed Canvey Island 300 years ago. Many thousands of tons of earth must have gone into the sea wall, with no greater aids than spades and wheelbarrows, to say nothing of the miles of stone facing on the seaward wall.

From time to time, too, I noticed more of the details—earlier walls within the island (our own bungalow was in Newlands, one of the later reclaimed areas), abandoned walls outside, and the remains of oak stakes protruding above the scattered rocks. I noticed too that the saltings outside were considerably higher than the land inside, due in part to the shrinkage of the latter, and outside to the continuous silting over the centuries. The lowness of the reclaimed land constituted a fatal danger, as the inhabitants were to learn in the disaster of 1953 when the walls were breached, a disaster in which two of my relations perished. 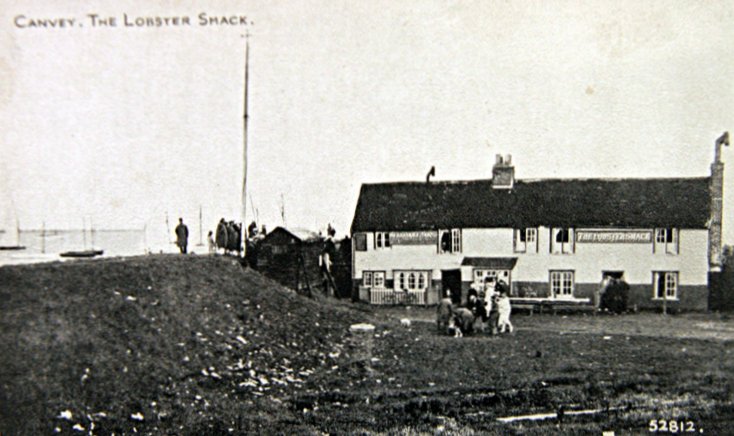 An old photograph of the Lobster Smack at Canvey Island. This photograph is undated, but is probably forty years old.(as stated in 1965)

I realized, too, why the Dutch had built the wall of greater length by following the indentations of the large creeks instead of building across the creek mouth. Three hundred years ago these same creeks must have been considerably deeper and have presented too formidable a task. There is little doubt that Small Gains Creek extended deep into the island (joining with Hester’s long lake), and the point at which it was cut was the lowest the Dutch dare attempt. The wall which was rebuilt after 1953 did in fact cut off a further section of the creek, but I am sure that further tracts of saltings could be reclaimed. Each time I study them I think how interesting it would be to be given the task. Actually, the cost would probably be more than covered by the value of the land reclaimed, bearing in mind its present value.

By B T Flight