Punch up on Canvey!! 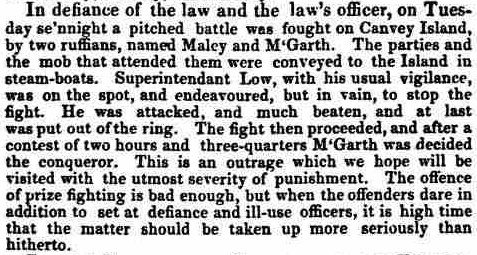 In defiance of the law’s officer, on Tuesday se’nnight a pitch battle was fought on Canvey Island, by two ruffians, named Maley and M’Garth. The parties and the mob that attended them were conveyed to the Island in steam-boats. Superintendant Low, with his usual vigilance, was on the spot, and endeavoured, but in vain, to stop the fight. He was attacked and beaten and at last was put out of the ring. The fight then proceeded and after a contest of two hours and three-quarters M’Garth was decided the conqueror. This is an outrage which we hope will be visited with the utmost severity of punishment. The offence of prize fighting is bad enough, but when the offenders dare in addition to set at defiance and ill-use officers, it is high time that the matter should be taken up seriously than hitherto.