You are here: HomenextArtsnextLiteraturenextBooksnextNon-FictionnextCountry Rambles Round London 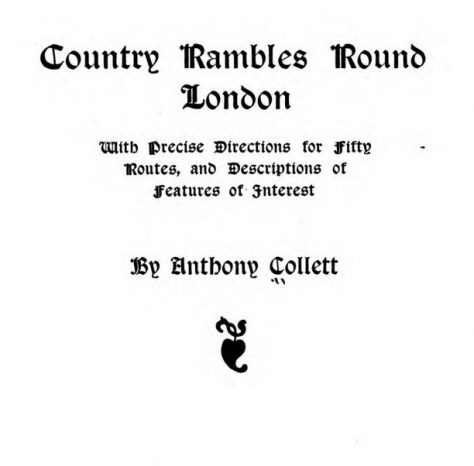 To spend a day in Canvey Island is almost like taking a trip abroad. Once the creek is crossed that parts the island from the green hills of the mainland, we seem to pass into a Dutch land­scape, all but the windmills. There are no wind­mills in Canvey Island, nor are any to be seen on the hills of Kent away beyond the Thames to southward, which form part of the almost endless view. But here are the wide green meadows, the dykes, the sea walls, the steamers that seem to skim over the meadows as they pass on an unseen waterway, and the sails that creep up by narrower creeks till they are furled in some haven beside a rickyard. It all seems curiously unreal within so few miles of London, for all that we pay for our ticket with shillings and not with florins, and shall not suffer from sea-sickness on the crossing.

South Benfleet village stands on the slope of a picturesque green hill rising from the marshes; you can smell the seaweed among its rose-bushes. Just across the road from the station lies the narrow arm of the sea that separates Canvey Island from the mainland. If it is near high water, we cross in a ferry boat; if the tide is quite out, we walk across on the stepping stones; and if it is in that inconvenient state when one can neither walk nor float, we can be carried pickaback by the ferryman.

Having thus gained the shore, we turn and survey the neighbouring island of England. Its mist conspicuous features at this point are the solid church tower of the village, and a new station, which has replaced the remarkably archaic structure serving Benfleet in the past. For the island is gradually growing in popularity as a fine unconventional holiday-ground, and a good site for a bungalow or ‘longshore week-end dwel­ling ; and at Leigh Beck, away towards the other end of the island, opposite Leigh-on-Sea, quite a little colony has sprung up in the last few years. You can see a placard advertising building plots, hung up just by the ferry; and the Dutch sugges­tion seizes you strongly at once, for half the bits of land bear the names of towns in the Nether­lands. These names are relics of the days in the seven­teenth century when Canvey was fished out of the sea by a Dutchman expert in that national art, who was given a third of the island for his services.

This was not the first occasion when Canvey arose from out the azure main; for a con­siderable quantity of Roman remains have been turned up here, and it was evidently well-peopled in their day. But before the East Saxons landed to found Essex there seems to have been a great inrush of the sea, or more strictly speaking, a lowering of the land, along all these shores of the Thames. Sea-plants and marsh-fowl replaced flocks and herds, the hunter the shepherd, and Canvey did not become properly habitable again till it was embanked and drained by Jan Croppenburgh, the Dutchman. At Canvey village, in the middle of the island, there is a curious old round house, with a date upon it nearly three hundred years old, which is known as the Dutch house. Nor is the Dutch element in the island merely a thing of the past. Dutch seamen are often found at Hole Haven, where their bluff lee-boarded craft lie up for a tide or two on the ooze on the trip from Rotterdam to London.

The rambler can arrange his day’s walk in Canvey Island much according to his energy and inclination. One good round is to strike away to the left on landing by the footpath (marked by a sign-post) to Leigh Beck, then bear to the right, and follow the sea wall along the Thames to Hole Haven, and then strike back to Benfleet through Canvey village. This makes about seven miles to Hole Haven, the distance across the island from Hole Haven to Benfleet being two and a half more. We can reach Hole Haven in about five miles by striking to the right for the outer sea wall by the road through Furtherwick (the second turning to the right along the Leigh Beck path) instead of following the path to the extreme corner of the island. Another good plan is to follow the sea wall to the right from Benfleet, tracing it round to Hole Haven by the side of the branching creeks. This route to Hole Haven is a little under six miles.

The energetic may walk round the whole island, which makes about thirteen miles; but this misses Canvey village, which is worth seeing. In any case, it is a pity not to allow a considerable margin of time for resting on the outer sea bank at Hole Haven or elsewhere on the main stream of the Thames, and watching the big boats come swiftly by so near at hand. Even at the periods of the tide when but little shipping goes by it is very pleasant to lie and gaze across the broad river to the fair hills of Kent, or to let the eye follow the Channel downward till it reaches the shining gap in the horizon, which is the open sea. For these reasons the best plan is to follow the sea wall to the right, and return across the island from Hole Haven.

We land from the ferry on a causeway at the side of the road that drops to the ford, and forms a navigable inlet in the marshes, when the tide is high. The narrow strip of salt-marsh outside the wall is clothed with sea-plants unfamiliar to inland eyes. Aromatic wormwood lifts its fine-cut tufts; the sea-aster grows in abundant clumps, and here and there is a patch of sea-lavender, bright green in June, and delicate purple when blooming in August and September. Redshanks fling their liquid call about the shore-line, circling in swift curves. Behind the sea wall the characteristic bird-life is that of the freshwater marsh. The in­constant chatter of the sedge-warblers, now sweet, now harsh, is blended with the song of the reed-warblers, more silvery, but more monotonous. As the wind bows the reed in the dyke the reed-warbler leaps forth, and clings sideways to a cornstalk in the bordering wheatfield. We skirt East Haven Creek, when the sea wall bends round to the left, and follow it until Vange Creek falls in to the right. Thence the two rivulets —for they are little more at low water—flow together to the Thames as Hole Haven Creek.

Hole Haven is a quaint and attractive spot, with the fairway of the Thames straight before it and a group of little craft riding at anchor or lying on the mud. Tea can be got either at the Lobster Smack Inn by the haven or at the new hotel a little farther along the wall. The road to Canvey village turns inland to the left, and leads us through level farmland till we reach the picturesque and primi­tive village with its pump under a thatched roof in the middle. Church, schools, rectory, inn, and cottages are all of wood, though the old Dutch House is pieced together of stones, which here are almost precious stones. Turning to the left, and then to the right, we return to the ferry by Benfleet station.