Published in the later part of the 1950s this guide covers the whole area. For Canvey Island it says the following:- 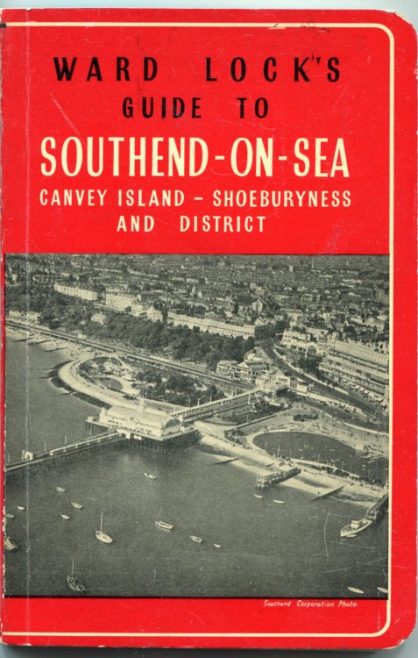 Canvey Island lies in the Thames Estuary some five miles west of Southend. Access is by a road bridge over the narrow Benfleet Creek. Its southern shores are bounded by the widening river estuary while on the west is the Holehaven Creek, on the north-west the East Haven Creek and on the north and north-east Benfleet Creek and Hadleigh Ray. Its area is about 4,400 acres, its extreme length from the western edge to Canvey Point in the east being 5 ½ miles. Its greatest width, from near Deadman Point to a point almost opposite Benfleet is 3 miles. The popular beaches on the south side are for the most part of small shingle and sand.

Formerly given over entirely to agriculture the island has become a highly popular holiday ground with modern es­planades, and numerous bungalow and caravan sites. At Thorney Bay there is a popular Beach Camp.

Canvey Island suffered grievously during the disastrous sea floods of February 1953 when almost the entire island was submerged. As an assurance against any further disaster of this kind the whole of the 23 miles of sea wall has been built up well above the height of any known tide.

Up to the seventeenth century Canvey was low marshland, separated by creeks and waterways into six small islets which were at high tide almost completely covered. Experiments in drainage were carried out by engineers from Holland early in the century and two Dutch cottages built to house some of them are still to be seen today. By a special Deed in 1622 Joas Cropenburg, a Dutch merchant in London, contracted for a fellow-countryman, Cornelius Vermuyden, to reclaim the land and this work was completed about two years later.

For the most part the modern development of the island is in the south-eastern part facing the opening estuary with the popular beaches and esplanades on the southern, river, shore. Canvey village is almost mid-point and is the site of the Parish Church of St. Katherine’s. The first church of this dedication was built about 1745 but only the chancel of that building remains. The present nave was built in 1849. The first wooden chapel on the site was put up by the Dutch workmen engaged in the reclamation and it is interesting to note that as a result of a petition to the King dated 1628 they were permitted to worship there in their own language.

A short distance eastward along Long Road is the Roman Catholic Church of Our Lady and the English Martyrs. It is a serviceable building in the Dutch style and was built in 1938. Attached to the church is an attractive Presbytery forming a unit which is both practical and yet in keeping with the traditions of the early Dutch settlers.

South-westward from the village Haven Road leads off to the shore at Holehaven Point near which is the Lobster Smack Inn believed to date from 1563. Lying off-shore farther eastward is the well-known Chapman Lighthouse.

Numerous creeks around the island provide good sailing ground. Apart from its normal holiday attractions Canvey Island is of interest in matters of marine life. Cockles are gathered on the mud and sand flats beyond the Point, and crabs and shrimps are plentiful. At high tide fishing is popular with plaice, flounders, bass and mullet forming a frequent catch. There is too a considerable amount of bird life on and around the island, birds to be seen includ­ing the grey goose, mallard, teal, shoveller duck, red-headed dunbird and many others.