On That Dreadful Night 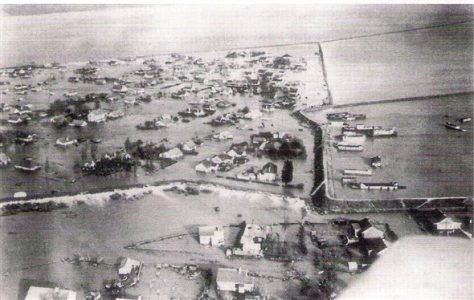 My family and I moved to Canvey Island from Walthamstow in 1951. We lived in a houseboat in Smallgains Creek, it was a converted landing craft called the Vange. I was eleven years old.

On January 31st (1953) we went to see our relatives at Walthamstow, we arrived back on Canvey in the evening and went to bed. I was awoken by my father and told to get up, as we were leaving the boat. The tide was very high and he thought the boat might drag its moorings. We left the boat and stood on the seawall, it was very cold and dark.

All of a sudden we heard the sound of rushing water and crashing noises coming from the back of a small shop in Hindles Road. My father got us back on the boat, as even if it broke loose, it would have been the safest place to be.  Then we saw people starting to appear on the sea wall, a lot of them still in their night clothes, wet and freezing cold. My parents got them all on board the boat and gave them hot drinks and blankets.

My father with some other boat owners managed to get a rowing boat to try and rescue people stuck on the roofs of bungalows. I can remember people calling for help, but one by one they became silent. Even though the boat was a bit leaking my father and the other men managed to rescue quite a lot of people. Our houseboat didn’t drag its moorings and was warm and safe for everyone. In the morning we had run out of water. The fire brigade gave us a tin bath full of fresh water, so my mother started making warm drinks again.

We were all taken off the boat and went to a school in Benfleet, some kind people gave us a lift to my uncle’s house in Shotgate, we stayed there for about six weeks. When we went back to Canvey it was in a mess, flotsam was piled up everywhere.

After they dammed the creek our boat was left high and dry, then we moved to a bungalow in Wheel Road. My uncle used the boat as a weekend retreat until it was broken up, a shame really, as I’m sure that it saved a lot of lives, on a dreadful night.