A 'Showman' comes to Canvey

Pauline Gashinski was born on Canvey Island emigrating to Canada because of the flood in 1953. She says of the floods ‘My Dad floated us all out – my mom, 3 kids and a chow dog in an old bathtub’. This is her story of her grandfather’s life.

Born 1876, Wood Green, London, he was the youngest of four sons.  His father James Monte was a photographer who operated several photographic studios throughout London before retiring to Southend in the 1890s.

In 1896, Dick was the third brother to be hired by Haydon and Urry Ltd., a firm of automatic machine makers – and one of the very early manufacturers and suppliers of cinematograph equipment and films.

Dick was hired as a showman demonstrator and operator for the firm as well as to help produce films for the firm’s new cinematograph (film projector) – the Eragraph – a popular machine with many of the travelling showmen and music hall proprietors.

On June 22, 1897, Dick helped his brother James film Queen Victoria’s Diamond Jubilee Procession.The film was shown that night at the London Pavillion music Hall and was thought to have been the first footage of the procession  shown in London. Dick’s first love was always the cinema and he always thought that filming the Queen’s procession was one of his greatest achievements. 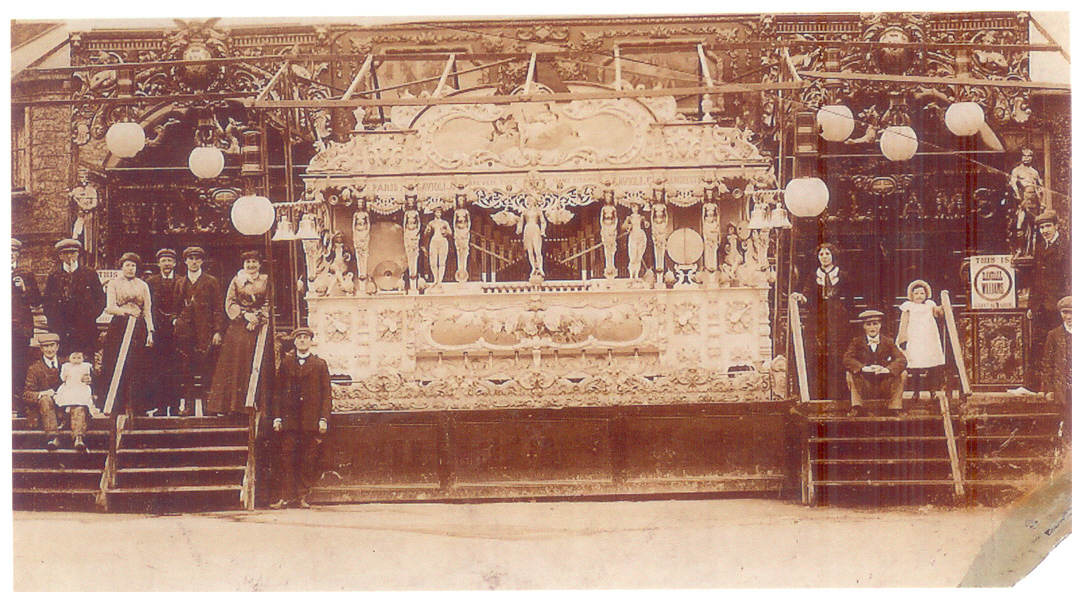 Left hand side, Dick is fifth from left, Carrie next to him taken in front of Randall Williams original show front

While working for Haydon and Urry, Dick met the famous showman Randall Williams at the annual World’s Fair in London in December 1896. Randall was well known for his ghost shows and in late 1896 he had begun showing films as an second feature in his show.  Randall’s first well documented film exhibition on a fairground was at King’s Lynn Mart in February 1897. It is believed that Dick and Randall’s nephew Reuben Williams ran the projector in the show. 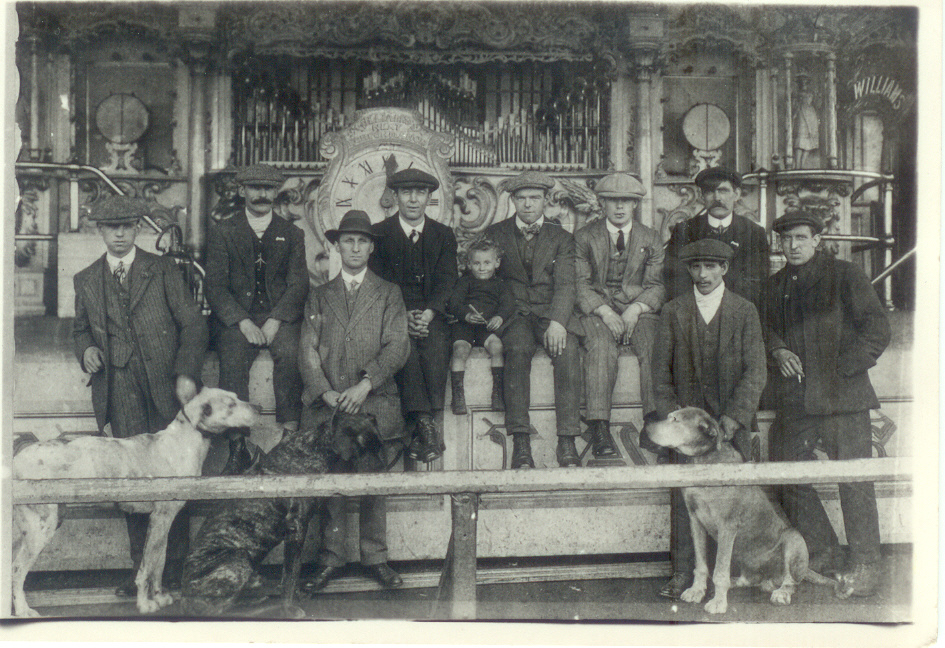 A photo of the new show taken about 1906. The front was built around a new state of the art 110 key Gavioli organ.

At the time of Randall’s death to typhoid in November 1898, Dick was courting his daughter Carrie. They married at Islington Register Office in London in January 1899. Dick and Carrie took over Randall’s main bioscope show (The Randall Williams Cinematograph) and their first showing was at the World’s Fair in December 1898. They continued to travel the show inherited from Randall until 1906 when they bought a larger, more elaborate show. 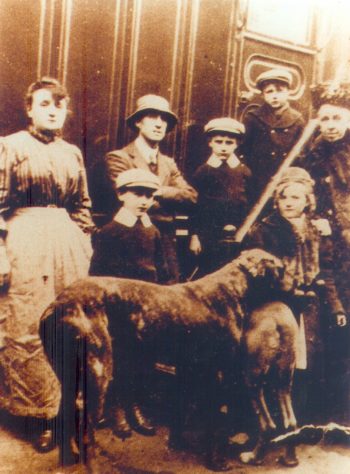 A family photo taken circa 1910

Having his own show (one not inherited from his wife’s father) Dick initially tried to change the name on the show to the Monte Williams Electric Theatre.  That didn’t go over so well with fairground audiences (the name Randall Williams was akin to a brand name)  and he had to revert back to calling his show the Randall Williams Cinematograph.

Over the years, Dick became known as Randall  Williams and he eventually adopted the name, changing his own name to Richard Monte-Williams by deed poll in 1910.  But on the showgrounds and in the fairground business – he was known as Randall Williams. 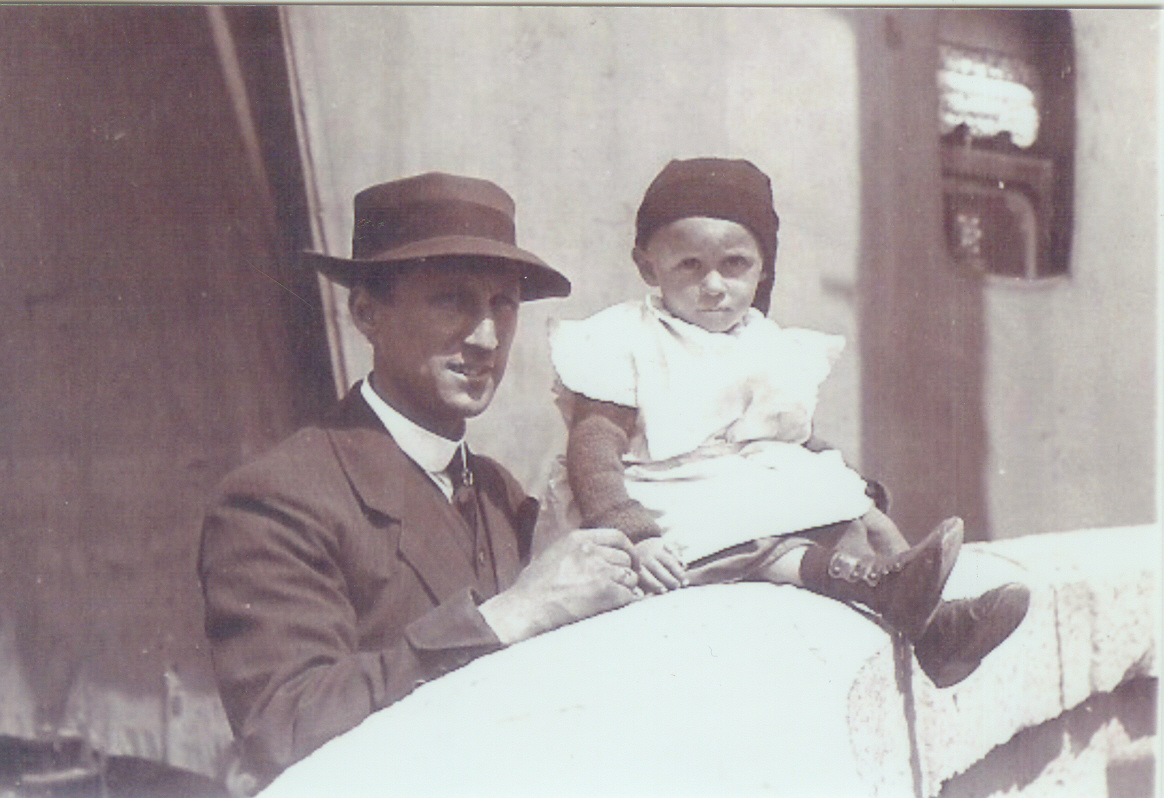 Dick and Carrie left the fairground business in 1919. The inter-war years had been hard on the family and with all the restrictions and the wartime economy, it had been hard to make a living. Forced to sell off all his equipment, Dick went to manage for showman Pat Collins in the Midlands (Dick’s son Eddie had married Pat’s daughter Flora).

Dick moved to Canvey Island in 1942 when he married second wife Marie Brown Sivado who resided at New Hazelwood, Remo Ave. Marie was the daughter of Edmund Temple (deceased) Captain H.M. Navy, but in her early twenties she had married Charles Brown of the acrobatic troupe the Flying Sivados. By the time he moved to Canvey, Dick was 64 and retired from the travelling life. He became involved with the Cinema Veterans Society which held meetings in South Kensington where he met up with some of his old friends, former showmen like Albert Biddall and Harry Scard. 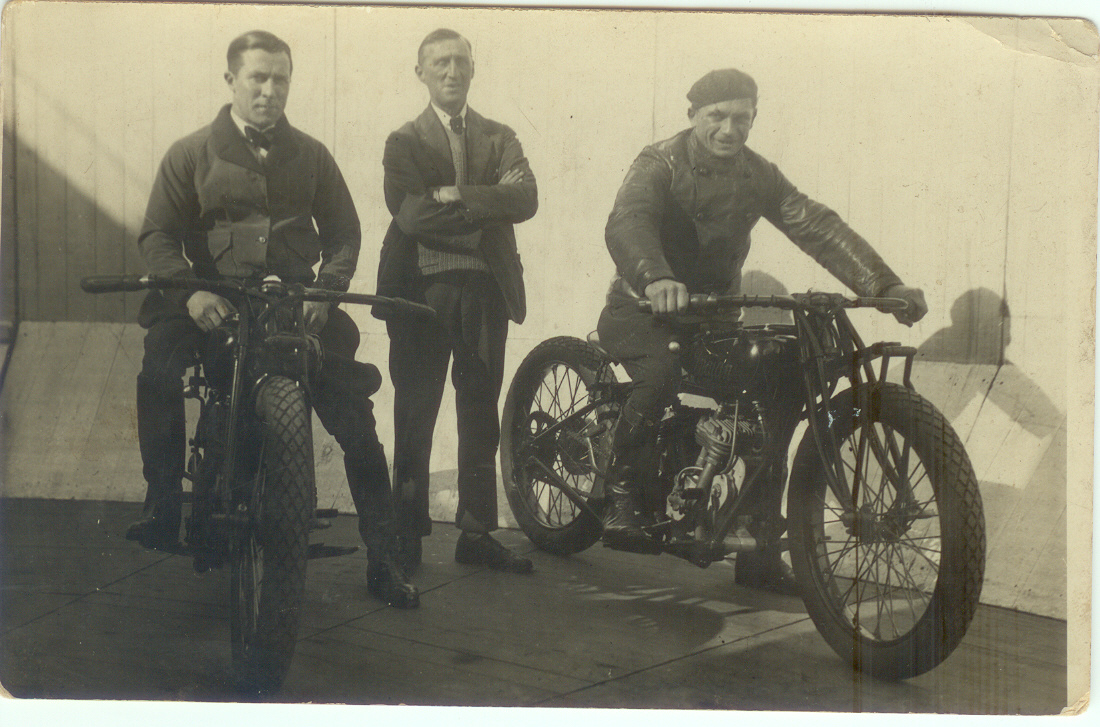 Taken in the late 1940s with two Wall of Death Riders – Eddie Harris and I believe it Tornado Smith was the second rider. Dick’s son Eddie (Speedy Williams) was also a Wall of Death rider

Like some of the other early cinema pioneers, Dick contributed his “memoirs” to the World’s Fair (the showmen’s trade paper) while residing at Canvey in the late 1940s. Long before cinemas were built, the travelling showmen had brought moving pictures to the people – so their role in the history of the early cinema had been an important one. There is little doubt that the speed at which the cinema took hold in Britain was due in large part to the combined network of suppliers (the travelling showmen) and performance venues (the fairs and fairgrounds) that was already in place..

Dick died on Canvey on April 6, 1953, just months after the devastating flood. He was buried at St. Katherine’s Church Graveyard.

“CINEMA PIONEER DIES:  We regret to announce the death of Mr.Randall Monte Williams one of the pioneers of the Cinematograph Industry, which occurred on Monday, April 6, at his home, New Hazelwood, San Remo Road, Canvey Island, Essex.  He was 76 years of age. Mr. Williams was at one time well known with his Living Picture Shows, which had an organ worth  4,000; this and the projector were driven by four Fowler three-speed engines. Some years ago he was presented with a trophy to commemorate the Jubilee of the cinematograph and also his own Jubilee in the industry, 1896-1946. A proud boast of Mr. Williams was that he filmed the first news reel in this country, for he had filmed Queen Victoria’s Diamond Jubilee procession, and had rushed the film to Essex Road, Islington, London, for processing and was screening the picture the same night at the London Pavilion. He had also taken part in some of the first to be made in England, and in one picture, “The Lady Overboard,” he acted the part of the woman. Mr. Williams was one of the oldest members of the Cinema Veterans’ Association. He leaves a wife, six sons and two daughters. The funeral took place on Friday, April 10, at 1.30 p.m., at Canvey Village Cemetery.” (World’s Fair, 1953)

Veteran of The Cinema: Mr. R. Williams: The funeral will take place on Friday at Canvey of Mr. Richard Monte Williams, 76, of “New Hazelwood”, San Remo Avenue, Canvey, who died on Monday. Mr. Williams was a pioneer of the cinema and was a member of the Cinema Veterans (1903) Association. In the early days of the cinema, he toured the fairgrounds with a mobile cinema and was a well known North Country show man.  His elder son owns the Carlton Cinemas, Limerick. As a boy, Mr. Williams worked for a firm of cinematograph machine makers. Mr. Williams leaves a widow, six sons, and two daughters. Mrs. Marie Williams, his second wife, met her husband at the 1924 Wembley exhibition. During the war she worked for a film company. (Canvey News and Benfleet Recorder, April 10, 1953)

Thank you to Pauline for the fascinating insight into the life of her grandfather Dick Monte-Williams. You can find out a lot more about her family including her great grandfather Randall Williams who came from a long line of travelling families from here . 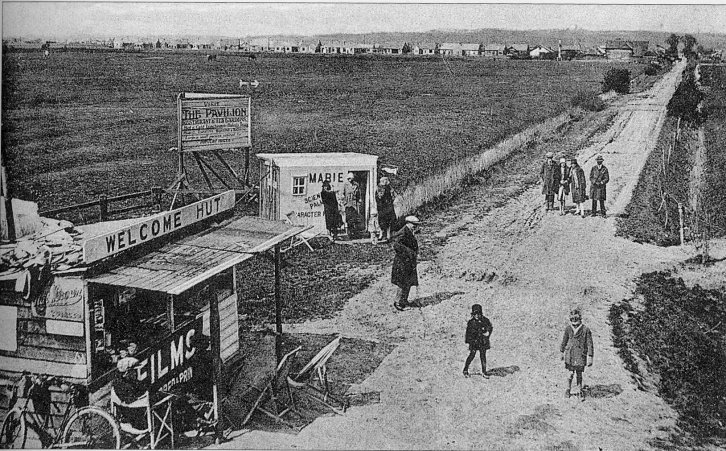 I have also been reliably informed that Dick Monte’s second wife Maria Sivado was ‘Maria the Palmist’, who had a place next to the Welcome Hut at the beach end of Furtherwick Rd. Thank you to Robert Hallman who had this picture of Marie in his book ‘Canvey Island A History’.