My Canvey, part one 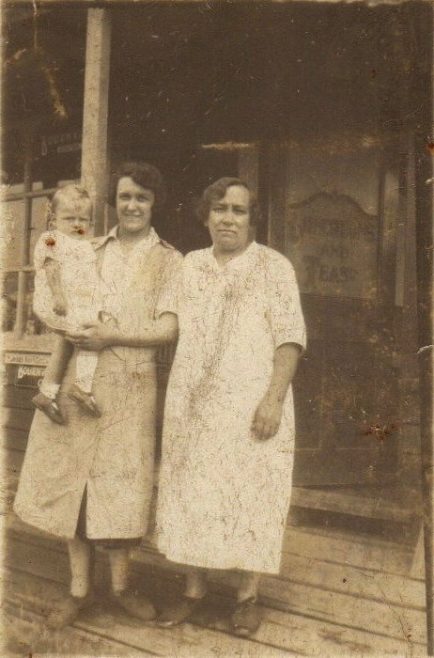 I’m not quite sure when my family first moved to Canvey from Woolwich in South London. My grandfather and grandmother, James and Jane Banaghen, their daughter Jane (known as Jinny)and her future husband, Harold Clarke, probably moved to Canvey in the mid 1920s, as my aunt and uncle’s marriage was recorded in Rochford District as 1926.

My grandfather had been licensee of a pub in Woolwich, near the Army Barracks, called The Red Lion. My uncle Harold was in the Life Guards and stationed at the Woolwich Barracks.

As my parents and siblings are all long dead, questions that pop into my head, nowadays, can no longer be answered and that’s so frustrating. I did, however, solve one mystery; why did they move to Canvey Island?  My cousin provided the answer; it would appear that my grandfather was known for serving drinks after hours. The local soldiers would knock on the side door and be let in! One day my aunt heard a knock at the door and welcomed in two plain-clothes policemen! Result – one lost licence.

Canvey was an up and coming place where people went to spend their summer holidays. It was also a convenient place for some popular musical stars of the day like Sonny Hale and his sister Binnie, and Jessie Matthews, to come to for ‘secret assignations’. They stayed in a bungalow in Gifhorn Road.

My mother used to tell me it was possible to send a postcard from London in the morning and it would be delivered to Canvey by the afternoon. In those early days the route across from Benfleet to Canvey was via stepping stones, if the tide was out, or else by rowing boat. How things have changed! 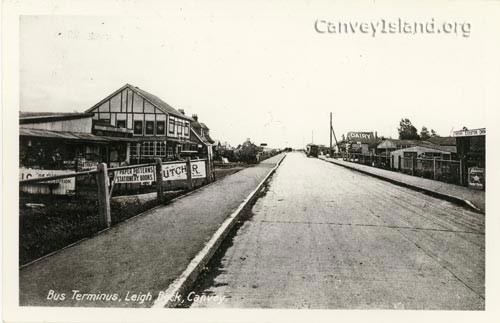 Ebor House is the large house on the left

My grandparents, uncle and aunt, moved into Ebor House, in the High Street, at Leigh Beck. Nobody seems to know why it was called Ebor House. I don’t think my uncle owned it and yet the name has links with him. He lived in Ebor Road or Terrace in the Holbeck area of his native Leeds. He also worked in Nigeria, where there is an area called Ebor. I also wonder if he had any involvement in the naming of Holbeck Road, which was very near Ebor House.  The downstairs front was a tearooms/shop, known as Clarke’s Stores, where the bus drivers used to have a cup of tea between journeys. I believe in those days  the buses didn’t go any further than there.  Access to the shop was via duckboards, (planks of wood) to cross over the dyke and the old seawall.

My parents, Tom & Annie (known as Nan) Thorpe, probably didn’t join them until around 1927 or 1928 as both my sisters Patricia and Sheila were born in Greenwich. My parents rented a tiny little bungalow, not far from the rest of the family, called Westward Ho, in Station Road,. Although it has been enlarged, it is still there and I believe originates from the early 1900s. I recently found that when my parents lived there it was actually owned by the grandparents of Judy Thoupos (nee Sergeant).

My mother loved to play the piano and sing and used to go to the Claremont Club, in Clarendon Road, off Seaview Road. It would have been two minutes from their home in Station Road. She also sang at the Kynochs and Canvey Clubs. 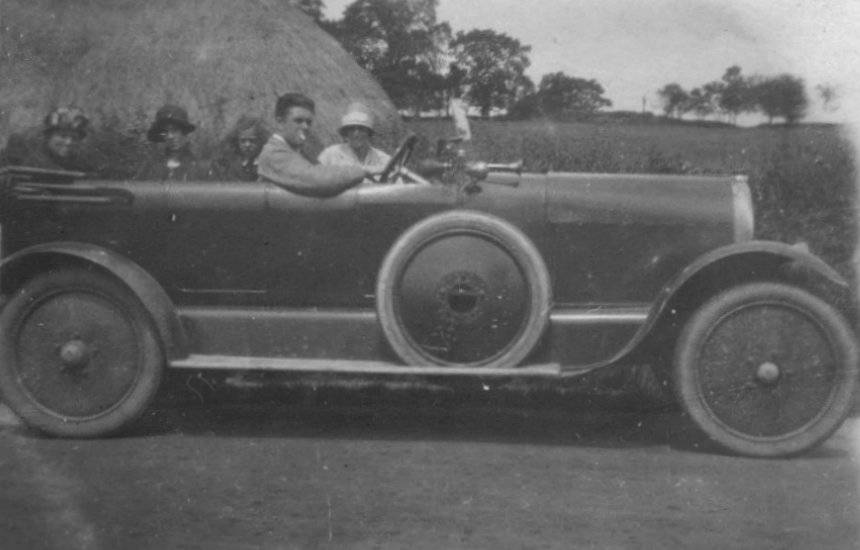 Some time after my grandparents moved to Ebor House the new road outside was constructed, employing many workmen. As the workmen needed accommodation and Ebor House was quite large, my grandparents, uncle, aunt and child, moved into large tents in the garden and rented out their bedrooms to the workmen. It brought in some well-needed cash.

During the time my Uncle Harold was living at Ebor House he went to work in Africa. However, he was involved in a serious road accident, badly fracturing both legs, so he returned to Canvey. 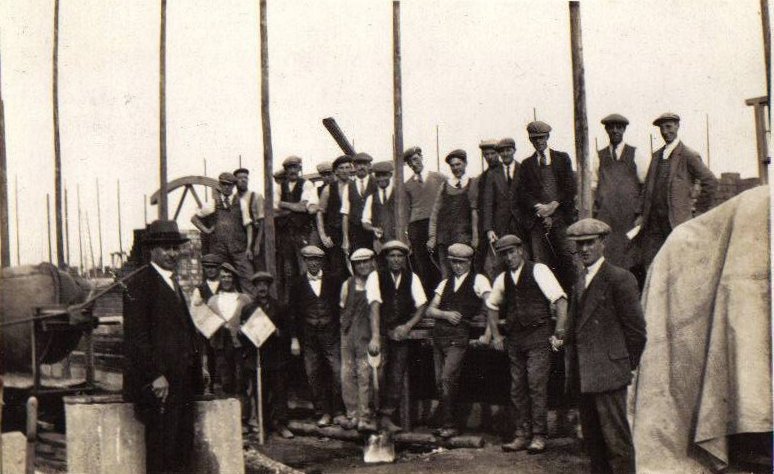 My father working on building the Admiral Jellicoe

My father was a stevedore in the London Docks but I think that travel to work was long and difficult in those days and building on the Island was on the increase. My father and my uncle both worked building the Admiral Jellicoe Public House in the late 1920s or early 1930s. In later years my father worked with George Prince (who became a Canvey councillor) as a pipe fitter, helping to build the oil refineries on the Isle of Grain, in Kent and at Coryton. 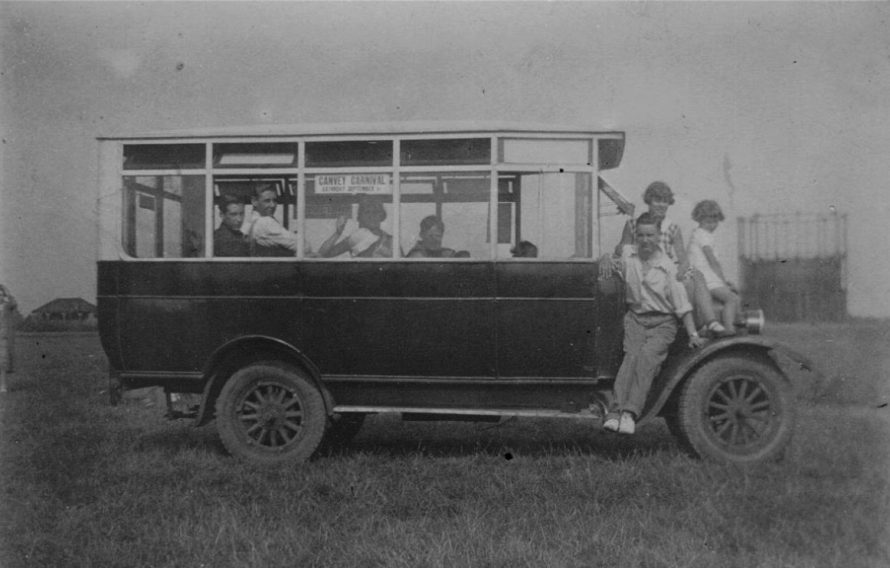 My aunt gave birth to two children at Ebor House, Joyce in 1927 and Alan in 1929. I don’t know how long the family stayed there but my uncle always had an eye for business having one of the first buses and taxis on Canvey.

He also decided to buy some land and build bungalows; one called Ambleside in Lime (now Limetree) Road and Dixcove in Geylen Road, into which my grandparents moved. He also built three in Wamburg Road, one called Cottesmore, into which my uncle, aunt and family moved, one called Elmina, named after a place he’d been in Ghana and the third, which my parents bought from him for £60 and named, Hibernia Lodge. In those days the area was known as Kloster Park and Mr Price Powell owned much of the land.

The bungalow, just of Gifhorn Road, in Wamburg Road, backed onto open fields and my mother, who by then was working as a barmaid at the Jellicoe, told me how, often when she was getting ready for work, she would notice the goat she owned had chewed itself free of its bonds and decided the grass along the seawall was much greener. Off would race my mother, trying hard not to get dirty, to catch the goat and tie it back up before rushing off to work. 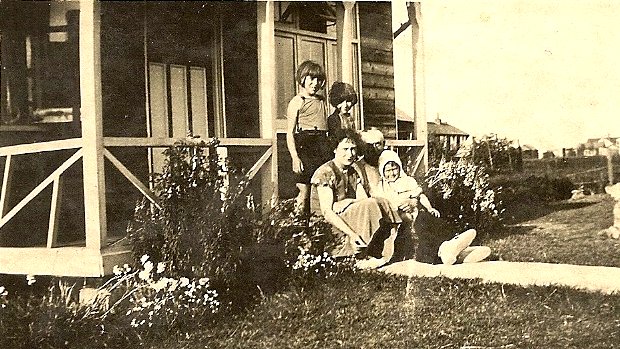 Hibernia Lodge with my mother, grandfather, two sisters and brother

Hibernia Lodge was on two plots, which I think was 60’x 60’, and consisted of four rooms; two bedrooms, a kitchen and a living room. After my father’s death in 1964 we sold the bungalow and two semi-detached bungalows were built on the plot, each having more rooms than we had, plus a garage each!

Even in such a small house the living room was kept for best and was where the piano took pride of place. I never remember my mother dusting the piano without sitting down to play a few melodies.

Life was lived mainly in the kitchen. In one corner was a black lead stove, which was coal fired, and kept the kitchen cosy in winter. We made toast against its bars and often kept day old chicks, which my father bought from Wickford Market, warm in the lower oven. Next to the stove was an armchair where my mother sat, plus a table with three chairs.

In the opposite corner were the gas cooker and the Butler sink.  Water from an outside rainwater tank ran through a tap into the sink and under the sink was a pail, which, as we had no sewers, had to be emptied regularly throughout the day. Woe betide the person who forgot to check the pail before letting water run down the plughole as they could be rewarded with soaking feet and floor. The final piece of furniture in the room was a treadle Singer sewing machine on which my mother carried out her dressmaking skills for various people as well as her children.

There was a ‘dig hole and bury it’ toilet in the garden which, in later years, was painted silver inside and had a painting hanging on the back wall of the Anxious Maiden. A bottle of San Izal stood on the floor and neat squares of the News Chronicle were harpooned on a nail. Honeysuckle grew in abundance on a trellis next to the toilet. To this day whenever I smell honeysuckle I am transported back to Hibernia Lodge and the toilet!!

My father regularly buried the contents of the toilet in the garden, deep down in the vegetable patch. He grew the best potatoes, cabbages and runner beans there! How would today’s Health & Safety officials deal with that? 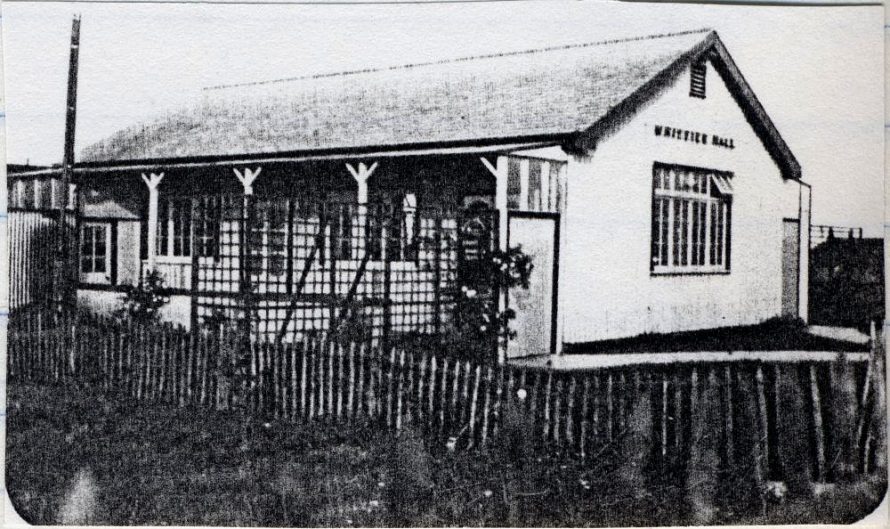 My sisters and my cousin, Joyce, attended Whittier Hall School. My older sister, Patricia but known as Pansy, was friends with Mary Andrews, whose father had the amusements at the bottom of May Avenue. Tragically my cousin, Joyce, was killed, aged six, when playing a game of ‘Touch’ with her friends as she came out of school and ran into the path of a bus. The Canvey Bus Company, whose managing director was Mr W.Allen, owned the bus. The driver, Mr Bernard McDermott Roe, tried hard to avoid her but ran over her. What added to the tragedy was that the driver knew Joyce well as he’d played with her as a young infant, whilst having a cup of tea in the tearooms. I believe he never drove again.

As my sisters got older they attended Leigh Beck School, where Miss Vincent was headmistress, and then senior school at what is now called William Read School, in Long Road. Mr Read was the headmaster at that time and my eldest sister remembers embroidering sheets and pillowcases with his initials for his home.

After the tragedy of my cousin’s death, my uncle and aunt moved away and had another daughter, Eileen in 1935, eventually settling into running pubs; The Yacht in Bexleyheath, Kent and the Army House in Woolwich, south London.

After WW2 started my mother decided she wanted to be near her sister so my parents, sisters and my brother, Brian, who was born on Canvey in January 1938, moved there. The bungalows on Canvey were rented out. My parents returned in 1945 with a new addition to their family –me, born in 1942. My sisters remained in Kent, as by now they were both working, although my sister Pat returned to Canvey to get married in1945. Her reception was held at the old Canvey Club, which was just around Gains Corner from today’s Canvey Club. It was burnt down in a fire some time later.

My other sister, Sheila, married James Haggerty in 1947 and shortly afterwards the bungalow my uncle owned in Lime Road became vacant so they moved in, living in the next road to my parents, my brother and me.